Before I get started with today's write, I want to apologize.  Blogging has become difficult with everything going on here in Southern Arizona.  I have been extremely busy with work and along with cooler temps, I have been out in the field more working and doing photography shoots. I'm back today again and look forward to catching up with everyone.  I have some amazing stuff coming up.  On one shoot, I actually killed my battery for the first time in camera history.  Thankfully I now have a spare camera:) Now for today's write. 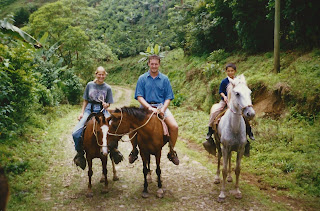 My first real bird outing began back in June of 1997.  I write this post because a funny thing happened.  I've begun to document the work from my world travel.  And for the first time EBIRD questioned my data.  This is okay.  Thankfully, I know I am not losing my mind because I have photography from my college days(before I could afford a great camera) that support my memories. I loved photography as much as I do today. Today I'll take you into my first trek as a birder.  And surprisingly, I hadn't a clue that this day would be the first of my birding documentation.  It also made me smile because another birder by the name of Phoebe Snetsinger was still out there birding.  And in some strange way it made me smile.  Perhaps we crossed paths at one point during my crazy travels.  She was one serious birder while the other(me) blindly went partying with the people absorbing language data:) 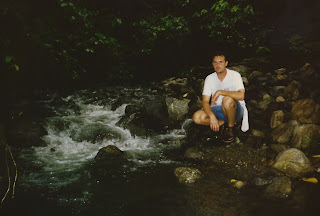 My friend Kathie taught me about using EBIRD.  And it's a GREAT idea!!!  But she also warned me that I may get emails from bird doctors and specialists studying data.  I understood that and have no problem whatsoever clarifying my work and observations. 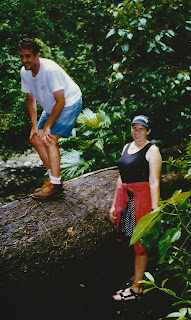 Mostly all of it has photo documentation to go with it.  I feel that if I don't see the bird or animal, it doesn't count as a sighting.  And if I don't get it on camera, it does not count as a real sighting.  Recently, I submitted a special day in Costa Rica back in '97 dedicated to my mother who loves all things parrots.  I combed the beach for the last remaining flocks of Scarlet Macaws at Corcovado National Park. We raised Macaws from eggs at my house.  My mother is a crazy parrot lady and many times our house in Wisconsin would sound like the Amazon rain forest.  I am not one for birds in cages and wanted dearly to see these amazing birds in their natural habitat.  So I researched and found the last remaining areas where they roamed freely.  And in the summer of '97 I left for Costa Rica in search of the Scarlet Macaws.
We arrived at the park via a truck early in the morning with our only food in a backpack and mosquito net.  We fought mosquitoes, boa constrictors, and caiman.  It was like the Lost World of Jurassic Park.  And my 3 friends and I walked alone along the coast of the Pacific Ocean.  One day I left them behind to observe Scarlet Macaws.  It would become my first serious documentation of birds and I needed pics to show my mother. I studied their flight patterns and eating habits.  I spoke with locals(thank you Spanish!) and figured out where they'd be hanging out.
And I waited.  Loud squawking could be heard nearing my position. And it was exciting.  I'd see them....these magical birds.  3 flocks during my morning observation would pass over my head.  I'd track them to the trees and write down their behaviors etc to send a letter back home to my family.  In all I had counted near 80 of them and it was incredible. They were like scarlet clouds along the tropical edges of the forest.
Back to EBIRD.  A question came back to me.  This number seems incredibly high.  I was saddened by the possibility that perhaps these birds do not number as they once did. 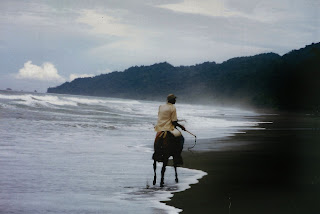 So I pulled out the old dusty photo album and counted the black specks in the air and confirmed that my numbers were accurate.  I was disappointed at the time because I wasn't able to get the shots that I do now, but somehow last night I was happy to be able to see the dark specs in the sky. 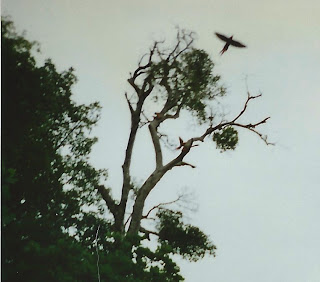 Since my journeys to Costa Rica, I have also spotted them in the Amazon Rain Forest during a breakfast with several curious monkeys:), and heard them on the isolated island of Coiba near Panama.  But since I am taking this birding thing seriously now, I can officially tell that for me, my documentation began during the summer of 1997 in Costa Rica.  While it was specific to only the Scarlet Macaw, it still counts as a valid bird outing. 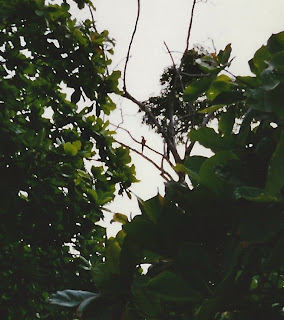 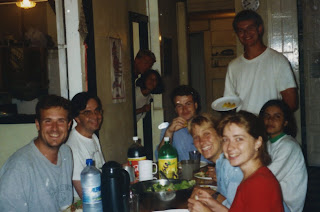