Let's See What's Out There

Everytime I run out the door into the world, I keep an active eye out for new species.  It becomes increasingly difficult to spot new birds on wildlife outings as they have already been spotted before.  And not every outing is a success in finding that new lifebird.
But I also look at every outing as a potential better sighting of a bird that will give me that million dollar shot.
But today I wouldn't get the stellar shots as I'd get a new life species to add to my list.
Interviewing several birders in the area, they were all excited to report the Canvasback.  And they did indeed capture my attention as they had a reddish head with a clean white back.  I at first thought they were just another duck hybrid until further conversations revealed that they were indeed special.
While "listing" as many bird species as I could, I was able to observe the Northern Harrier in great detail.  Like the American Kestrel, it comes and goes.  It has been awhile since I had seen the bird. So it was fun to make observations.
Herons are strange birds.  Sometimes they will sit super close to you while fishing and other times they'll just hide in the vegetation.  In many ways, they make me laugh.  They'll use you for food and then disappear.....much like our cats at home:)
At the time, I had been trying to figure out this bird of prey above.  In one other shoot, I came back with terribly terrible pics.  It was only on this day that I could get an ID from this pic.  Very tricky with the sun setting. 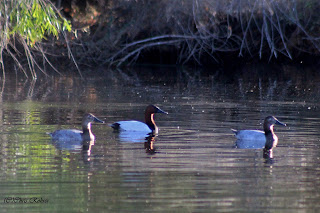 The Canvasback stayed for that day and then disappeared the next.  They weren't spotted at all afterwards. And like many of the birders had advised me to do....."Get your shot now because they are not a reliable bird to see around this area."  So I did and now have ID evidence:) 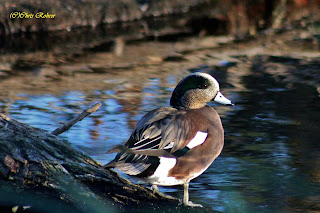 But I get distracted with all the other things going on....Harris Hawks hunting, ducks quacking, etc etc.....
And everytime I go out into the field, I am energized by the possibility that maybe....just maybe, I'll find something new:)  Little did I know but in the upcoming days ahead, I'd discover more incredible new birds.  Stay tuned for more.......