We had heard a rumor.  One that would prove true.  Kathie and I met at a super early hour to find birds up in the Gilbert area.  We drove into the parking lot and my lifebird count started to rise leaps and bounds.
As I write this today, I am laughing to myself.  Kathie and I have been on a million trips since this post.  On Sunday, we were on an epic journey together and started talking about our blogs and how far behind we are on writing.  She asked me, "Did you get to the Gilbert Ranch yet?"  I smiled and panicked at the same time.  "NO!"  We both have so many photos to process.  But life has been super busy and everything took a backseat.
Well anyhow, we entered the park and saw all the usual suspects of Arizona...Verdin, Starlings, Blackbirds, Egrets, Herons, Thrashers, Quail, etc etc etc......but we were there for the "Peep" show.  A little bird told us that we could see them up close and personal.  And boy did we ever!  A special post is coming on those tiny little birds.
But we were able to get so many birds in our first hours at this Gilbert Preserve.  I'm not a Phoenix fan but it was cool enough for us to be there on this day.    Phoenix is essentially one big concrete island in the middle of the desert full of crazy people who drive into your house while you're sleeping.  I'm not even joking.  The most random crime events happen there.  It's super hot all year round.  Full of cars and traffic.  Nature isn't far away but it's a drive.  Gilbert is essentially one big suburb of cookie cutter homes.  Our GPS tracker led us straight into this preserve and I think my jaw dropped to the ground.  What an amazing surprise!
There were birders present during the beginning hours.  Although I did count one homeless person who asked us to ID a Starling. Now that could have been legit but it felt like he was going to ask us for something more.   Something wasn't right with that one and we left with grace.  Now don't get me wrong, I was polite but in Phoenix, you never know if someone is going to pull a knife on you....so it's best to avoid those random elements whenever possible.
We both lost ourselves in the first hour with lots of "oh my gosh Kathie, LOOK!"  "Chris!  Get over here!"  Talk about being kids in a toy store. She's writing.  I'm taking pictures. Birds are flying everywhere. Complete and utter chaos. "What's the number on that Kathie?  How many Pintails would say?" And it went on and on like that......but we also stopped counting to just stare in awe at the amazing array of birds that we normally don't get to see up close.
Now if you're in Tucson, you need a spotting scope to see many of these birds.....especially in the Sweetwater Recharge ponds.  But at Gilbert, you could practically touch these birds.  That's how close they were.
And DOVES!!!  Phoenix and surrounding suburbish cities are full of them.  While Tucson has most of the same doves, most of them moved up to Phoenix and Casa Grande.  It would be here in Gilbert that I would spot my first Incan and Eurasian doves.
I'd be watching a Killdeer or Sandpiper only to find hundreds of birds all shooting up into the air because a Northern Harrier was flying our way!  No way.  Camera!  Focus Chris!  Get your lens on him!  Focus FOCUS!  You're going to lose the bird!
Birding with myself is terrible sometimes.  I am a perfectionist when it comes to getting the shot and if I don't get it, I'm pretty hard on myself. Yes, birding is fun but it's full of challenges that push you to your limits in so many ways. 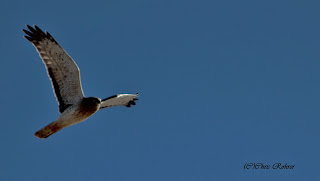 Meanwhile, a new Dragonfly comes my way and I think of Jeanne and her love of all things "wings" and snap the shot.  Pretty lifer!  While doing this photo shoot.......something more epic happens.
An Osprey flies over my head and I nearly crap my pants.  "Kathie!  Kathie!  Oh my....!"  It was the one bird I was hoping to see.  I mean REALLY hoping to see.  "Chris be careful....!"  I run off with my camera. A little kid with a little bell, "Dah Ding Dah Ding" comes out of nowhere and I almost get run over.  WTH!  When did runners, bikers and horse back riders join the birders on the trails???!!! 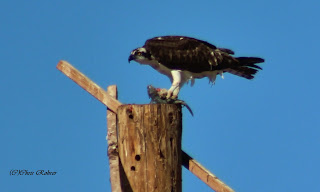 I snap back to reality and train my eyes and observation onto this incredibly beautiful bird.  Kathie is so supportive and understood my thrill.  At that point, I stopped counting birds and just stood watching the Osprey for a long time. 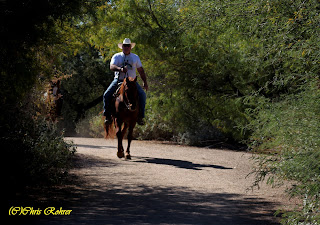 Meanwhile, a Great Egret passes by the Osprey to check out his catch:)  In fact a lot of birds found the Osprey's find interesting:) 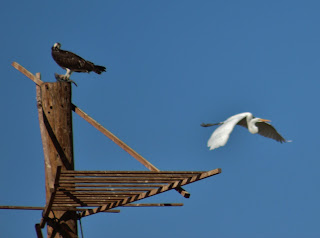 Just check out the wingspan below!  When it flew over our heads, I felt the presence of a dragon.  The shadow was big....and so were the talons as it looked at us below:)  I really respect Kathie and value her thoughts on birds.  We remind each other of etiquette and keeping our distance as to not bother the birds.  I'll be writing about a very controversial topic in a couple weeks while on the tail of a super rare bird on the trail.  Birding etiquette is always first on our minds.
And just as incredible as the Osprey was to me, this Incan Dove below made my day.  I have been really bothered this year by their disappearance from Pima County.  They are rare to find in Tucson.  I've been searching for them the entire year.  Once numbering in the thousands around Tucson, these birds now are somewhere in the hundreds.  While Tucson has seen a major decrease in their populations, the Phoenix area has seen a rise in their numbers  What gives?  Over the next two days, we'll be exploring more from Gilbert Ranch.
I'd like to thank Laurence from Butlers Birds and Things for putting the idea into our heads.  We want to bird with you Laurence.  Imagine the epic birder team we'll make together.  We'd become a force unlike any other.  All birders would fear us.  50 birds in a day?  How about 200?!  Okay maybe I have an active imagination:)  But I can't wait to meet you maestro.  More tomorrow....