From Out of Nowhere

Whether it be with another birder like Kathie or alone, I sometimes think to myself that it won't be very "birdy" when I first arrive at my destination.   Thankfully, I have lots of experience to suggest that giving "it time" will be full of great reveals.
The scenery, of course, is gorgeous and can draw your attention away from the action.  But I listen carefully for bird sounds and wait.  A burst of bird energy will surface and then all birds will be up in the air at once!
These Blackbirds for example came in droves by the hundreds and then quickly disappeared.  I snapped as many shots as I could get so that I could ID them at home.  The flocks were full of Yellow Headed Blackbirds and Red Wing Blackbirds.  But there were others mixed in as well:)
And so on this day at the Whitewater Draw, I thought I may not get a new lifebird until a group of birds came at me from out of nowhere!  Finding lifebirds is incredibly exciting and when that moment happens, all I do is snap pictures with an incredible focus.  I don't necessarily know what they are specifically at first but I have my bird guide close by after the shoot to research.
Today it would be birds from the "Grebe" family.  Were they Western or the Eared Grebe?  Great question.
The first thing I do is check the Whitewater Bird List and write down the Grebes reported in the area.  Then I open my bird book and study the pictures both in the bird guide and on my camera.

For these birds, it took the markings on the wings to help me ID.  These were the Eared Grebes.  I observed for about 40 minutes as they dove in and out of the water.  They were quite cute and "playful". 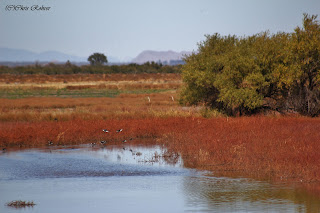 Afterwards, I felt satisfied leaving the area knowing I added a new bird to my list. Several birders from Vermont were looking at a bird up in the rafters.  The woman declared it was a Western Kingbird and argued strongly with her mates.
The men stood their grounds and thought it was a Say's Phoebe. 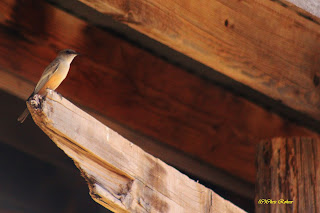 Can you tell which bird this is? 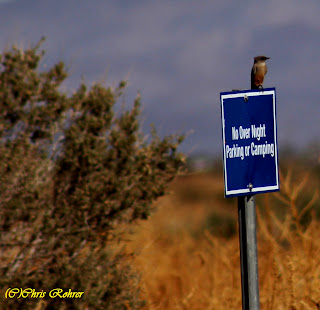