Searching(chasing really) for the Western Grebe, I wasn't into the photography bit.  However, the one picture that I really worked for was this one.  It was an early early morning at around 6 AM before the humans and their dogs would arrive at Sam Lena Park in Tucson.  Using my GPS tracker, I was hot on the trail before it got too hot!
I found my target bird which is only used for ID purposes.  This is not a great shot but evidence that I found the bird.  Along the way, I had nice views of this female Belted Kingfisher.  I am hoping to get better shots but this is my best so far.
However, my series of photos dealing with this Great Egret below would be the artsy shots for the day.  And everything thing else was just icing on the cake.  Here is my take on the work.  Note the clarity of the shadows and the slightly out of focus images of the actual bird and its' reflection.  And my intent here is, "What's real?" 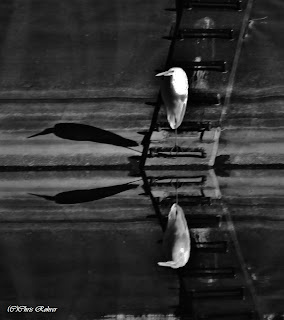 And that was a thrill for me to observe!  But more importantly it creates a deeper shade to the shot than looking at "just another bird".  I think I took about 50 of these!  I never know when an opportunity will present itself, but when it does, I'm ready with the camera.
While focusing on the Great Egret, my eye captured another lifebird scurrying along the shore of the lake.  Grabbing the camera, I snapped an image quickly before the bird disappeared.
Above my head, two Northern Rough Winged Swallows flew.  I questioned if they were real, but I snapped the shots for evidence.  Not all of them have migrated and several reports from that day indicated several were still in the area.
After Sam Lena, I headed to the Amado Recharge ponds to find the Lesser Scaup reported.  I would find the find the bird but not on this day.  But I did see another two Northern Harriers along the pond.  I had to strain my lens to get a poor quality shot.   They are such interesting birds.  I'll have a report on how challenging the birding has become so stay tuned for more:)
Posted by Rohrerbot at 12:00 AM