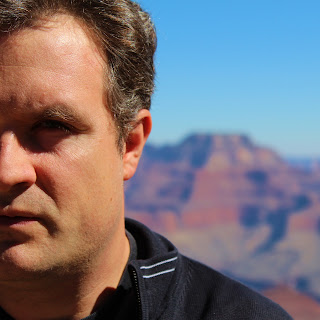 Thirty years ago, I went to visit this natural wonder of the world.  I was a child and the entrance to the park was only 7 dollars.  Today a car entering the park is 25 dollars and worth every cent.  The drive from Tucson was long and interesting.  Eventually we reached our destination of the culturally enlighted sky island of Flagstaff.  I hadn't been to Flagstaff in awhile so it was refreshing to make a return to the much cooler temps of the world.   It was here that we set up camp for an early Saturday morning departure to the Southern Rim of the Grand Canyon.  And when we did, it was like leaving Arizona altogether and entering the international community.  There were all kinds of people from different countries like Japan, Germany, Alabama, Spain, and Portugal.....and that's just the short list!!! 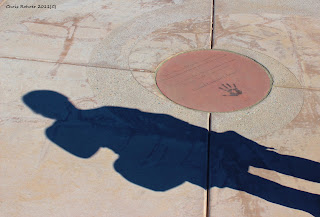 It was stepping back in time.  It was walking the same place that my grandparents walked when they were alive.  It was going back to 1975 when Smoky the Bear and Fred Flintstone ruled the airwaves of our grainy TV sets.  In fact, there were those OLD signs from our past and they made me smile in a nostalgic kind of way:)  That was until we got to the entrance of the ranger station and had to pay 25 dollars.....then the reverie ended:)  Internet and radio waves were taken over by a more international style type radio station.  It was fun to listen to the all the things our state had to offer but after non stop advertising, I eventually put in the classic music. 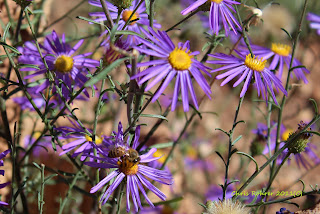 The Grand Canyon is our state's symbol.  It's what identifies us from the rest of the country and what makes Arizonans well.....Arizonans.  I think this place and the Saguaro cactus are two of our geographical and natural landmarks the separate us from the rest of the world.  The rest of the world of course happened to be visiting the park the same day we did and it was interesting to see the mobs of crazy Turks and the quiet  pairs of French people:) Not only was it nature day; it was a day to people watch which happens to be one of my favorite things to do!  By the afternoon it got packed.  Me and the better half, Pat, separated ourselves from the crowd.  Sometimes it was a bit too much and we were there for some fun hiking. 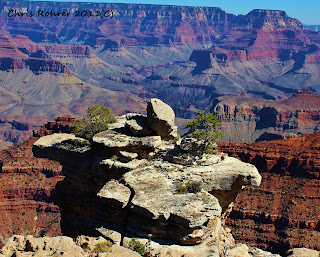 So with our cameras, we took lots of shots around the rim of the Canyon.  Everywhere we turned there was a shot just waiting to be discovered.  This picture was taken while a family of 4 was hiking behind us.  The soccer lady mom was ridiculous and her husband was patient.  We listened because the drama was so ridiculous.  These people brought their dog with them but the lady was freaking out because she wanted to take the dog off the leash(which is a no no), but the dog would jump off the cliff and she couldn't stand the thought of that terrible tragedy.  So she wanted her husband to walk the dog back, but he kept saying, "Let's keep the puppy on the leash."  But the crazy lady would have nothing to do with it.  So she obsessed about it and began yelling at her husband.  She stormed off and her husband called after her asking her to wait and come up with a plan.  But being impulsive, like she was, she grabbed the leash and left her husband and two kids behind without discussing anything.  We were irritated by all of this stupidity and tried to escape on the path from these idiots, but the woman would keep walking past us and bringing her drama with her.  At one point, she was near the cliff......:) 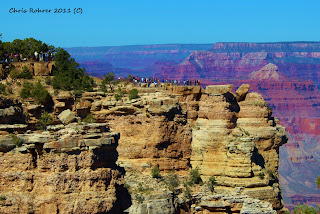 So we continued having fun along the miles of trails and snapped lots and lots of pictures.  The above pic shows an area highly populated by tourists.  The best time for a quiet walk is at night when the magic really happens. Elk come out.  Birds fly around you for berries.  People are tired and exhausted and too lazy to walk.  Photographers are trying to get those sunset shots....and there is this serenity!!  It does get warm and the sun is intense so bring a hat and some sunblock. 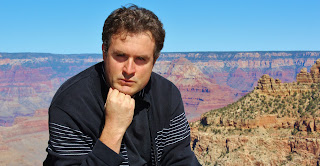 For the real hikers looking for an Inkan trail experience, get your passes early to hike on down into the canyon.  People were coming up that steep trail exhausted after this famous several day hike.  It's something I would love to do in the future. 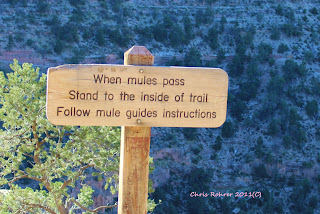 Artsy fartsy.  I was a little leary of the shot below as these were my only means of seeing on this trip.  Yes, these glasses are on the edge and the wind could have easily picked them up and flung them over the side of the cliff.....but I will concede, it is a great shot.  Families looking to unload a spouse or several children off the rim should be warned that it is illegal to do so as it is one of the parks rules. I guess they just don't want you to pollute the natural environment.  I'd personally argue that it would help the Condor population increase....but I'm just a Spanish guy. 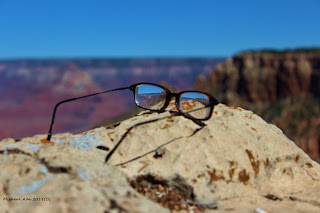 I can't do a post without some background info. If you want to cut costs, bring food in a cooler.  The cafeteria is expensive. Parking is plentiful, but during summer months, get there early as the park will be packed. Make sure you have some good hiking shoes.  There are really 3 parts to the canyon...well 4.  If you were to do the whole thing, it would take you weeks.  Most people visit the South Rim.  The North Rim is far!! and an extra 215 miles away.  If you want to do the North Rim, plan an extra day.  There is, of course, the hike into the canyon.  Make sure you bring plenty of water and have a guide.  Passes are given out by the park system.  No matter where you go, bring water with you because it's only located in a few places here and there along the rim. 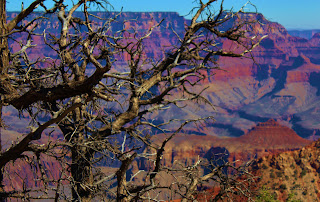 The hike can be rated anywhere from easy, moderate, or to difficult.  It just depends on what you want. You can also do the traditional mule ride down into the canyon.  These are offered daily.  There is a "free" shuttle service that will take you to the various hotspots around the park. 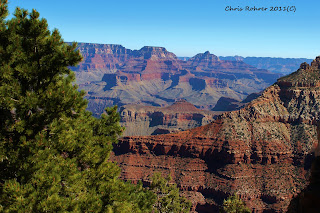 I'd like to recommend practicing using your camera before going to the park.  I almost lost out on several shots because I didn't play with my new camera before we left. However, I brought my old camera and it came in hand when the most amazing Moon Over the Grand Canyon happened.  But the shots could have been better because I had a camera that could take those shots.  Work on the night option and consider bringing your tripod. 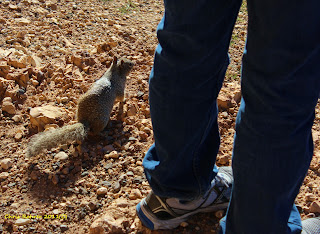 We saw something going on down the trail and we all had a good look at the exhausted hikers limping up the trail from the deep canyon floor. 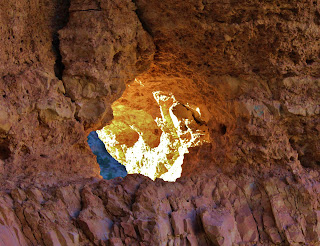 I love how the light played with the shadows of the rock formations.  If you are a Geologic nut, you'll love the Canyon. 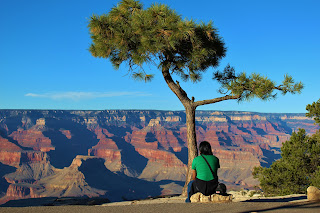 Keep your eyes open for wildlife...my most prized moments.  This is a Western Scrub Jay below at sunset.
Old structures are found around the grounds.  And I'm sorry, but I have to say it......so are the cheesy tourist shops. 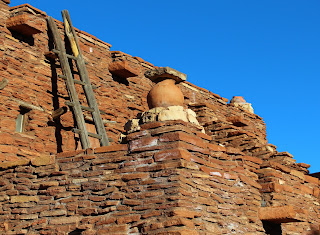 The colors of the canyon at sunset...... 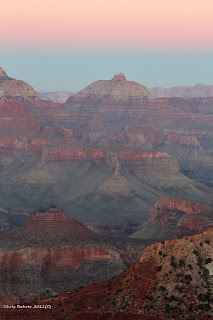 Everywhere you turn, there is something to discover. 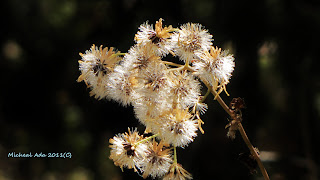 I found the evening to be the best time to capture the wildlife shots.  There were too many people around during the morning.  We saw Elk, birds, mice, rats, and all kinds of fun around sunset.  There are several photo opportunities to consider.  There are the wildlife shots, the moon rising over the canyon shots, the canyon shots, the people shots, and of course the popular sun rising/setting shots.
Tomorrow we'll explore another great area.....but in Colorado Springs! Until then..... 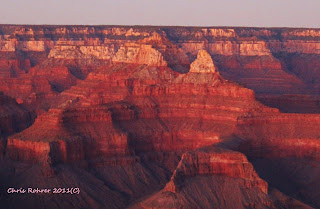