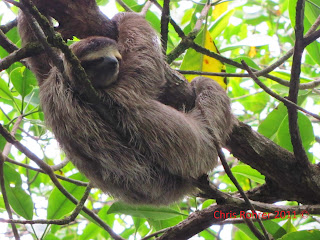 One of the most perfect examples of how interconnected everything is to one another in nature is thru the example of the Cecropia tree. While in Panama this past summer, I furthered my studies on tropical plants and their importance to different species of animals, insects, and birds. Today's post focuses on the importance one species can have on the world.  Remove it and the balance is destroyed.  When a species goes extinct on this planet, something else is affected.  At first, it may not be noticed, but eventually it will catch up with what I'd like to call the "cascade effect".  While the Cecropia is an easy example to use for biodiversity, it's certainly not the only tree or plant that serves multiple purposes in our natural environment.  I could write about the importance of the Saguaro cactus in the Sonoran desert and how it plays an important role for mammals, insects, and birds alike, but I took these pictures and wanted to use them in my write!
This tree is host to the Cecropia moth, sloth, and ants!  These trees are characteristic features of many American tropical rainforest ecosystems and may be among the dominant tree species in some places. Being aggressive, rapid growth trees, whose succulent fruits are readily sought by various animals, they tend to be among the first pioneer species to occupy former forest areas cleared for pasture or altered by human activity.Cecropia hololeuca, known in Brazil as "silver cecropia", has broad, silver-hue leaves that make it to be used as an ornamental plant for landscaping projects, as is the case also with the similar species C. pachystachya.  Source:  Wikipedia 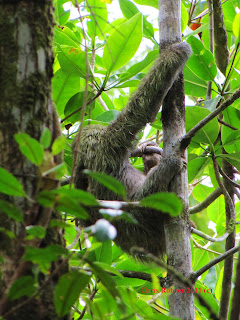 Here's an example on how interconnected everything is.  Inside the Cecropia, a type of ant lives.  If any movement is felt on the bark of the tree, the ants will come out and attack.  In a sense, they become the guardians of the tree in a very healthy symbiotic way. If you tap the tree, the ants will immediately come out from the bark and attack!  So you may ask, "Then how does the sloth live off this tree?"  Well the sloth is so SLOOOOOOOOOW moving that it is unaffected by the ants. While we were in Panama, it appeared that every one of these Cecropia trees had a sloth hanging out in it! 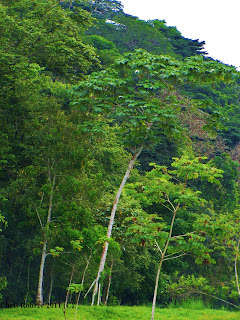 There are a lot of varieties out there. Some have larger leaves while others have smaller forms.Cecropia species are used as food plants by the larvae of some Lepidoptera species, including  the Cecropia Moth (Hyalophora cecropia). The leaves and buds are also eaten by sloths as their main source of food. But many herbivores avoid these plants: most Cecropia are myrmecophytes, housing dolichoderine ants of the genus Azteca, which will vigorously defend their hostplant against getting eaten. 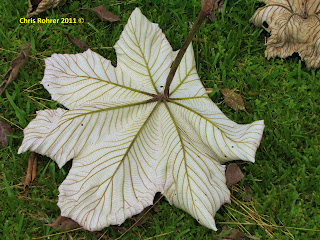 Cecropia fruit, known as snake fingers, are a popular food of diverse animals however, including bats like the Common Fruit Bat (Artibeus jamaicensis) or Carollia species, the Central American Squirrel Monkey (Saimiri oerstedii), and birds like the Green Aracari (Pteroglossus viridis), the Keel Bill Toucan (Ramphastos sulfuratus)pic below, and many other birds.The seeds are not normally digested and thus these animals are important in distributing the trees. Some birds – e.g. the Lesser Potoo (Nyctibius griseus) – nest in Cecropia trees. The Elfin Woods Warbler (Dendroica angelae) is notable for using Cecropia leaves as nesting material, which no other New World Warbler (family Parulidae) seems to do.

Posted by Rohrerbot at 1:33 AM