The Antelope Near Colorado Springs 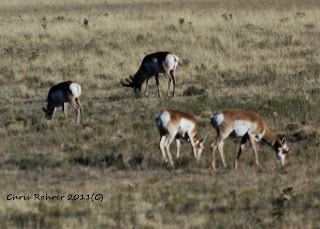 We're getting closer to our Colorado Springs journey as well as our Grand Canyon trip.  Today's post is an interesting one for me.  I've lived in different parts of the world, but nothing quite prepared me for what I would see in northern New Mexico and Colorado.  I have a good eye for spotting things that don't quite blend in with the landscape or something that sticks out on the landscape....like these Antelope.  For one instant moment, I thought I was back in Africa again.  Our trip would reveal lots of antelope.....all over!!!  We have established Pronghorn back in Southern Arizona again and through excellent conservation work between the US and Mexico, they are slowly growing back in numbers near the Buenos Aires bird refuge. 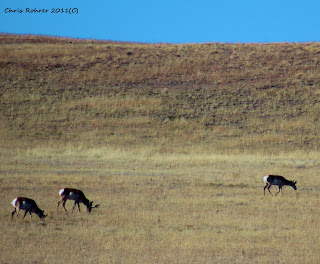 But this was a shock!!  I had been looking for elk or deer...something....just not this.  The previous weekend, there had been elk walking along the rim of the Grand Canyon, but this was unexpected.  Some random thoughts that went through my head were......."Wow!"  "How many are there out there?", "What do they eat?", "How do they survive out here?", "Do ranchers/farmers get irritated that they share the land with horses, buffalo, and cattle?" "Did they escape from a refuge?"

Here is what I know.  Most antelope are NOT native to the US.  Many ranches have these animals around for hunting purposes.  However, because of their amazing jumping skills, some escaped and began to create wild colonies around the states of Texas, Utah, Colorado, New Mexico, etc.  The antelope hang out in the grassland areas and follow the rain as they similiarly do on the African savanna.  So they are pretty resilient creatures.... 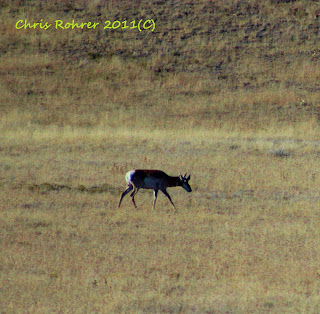 I then imagined these exotic critters and their influence on our American soils.  Has the mountain lion population benefited from this additional food source on the plains of New Mexico?  A parting thought for today as I have been just disgusted by our human race as of late.  Two more rhino species are now listed as extinct...the white rhino and the black rhino although some remain in zoos.  Conservation efforts are hopeful, but the white rhino doesn't breed often due to some behavioral elements.  Several of the antelope species face extinction in Asia and Africa due to hunting and poaching practices.  Hope is not lost, but it does dim every time we lose a species on this planet.  It will ultimately be the end of our own species if we do not take care of this planet.  At a population of 7 billion, our planet cannot sustain much more.  At first, it will start with squabbles and mini wars.  The greedy richer countries will claim it's to protect national interests, but it will really be about controlling limited resources.  Eventually it will lead to a total collapse of our global resources....and an end to the human race.  One last thought.  How can the world maintain a capitalistic attitude? If we keep taking more and more and more....there won't be anything left.  I know....this is a rant, but it's frustrating.  Sometimes, like when I glimpsed these antelope in New Mexico and Colorado, I feel like perhaps nature will try and work itself out.  Humans are the shepherds of this planet and if we don't protect this treasure, we face our own extinction.

However, I'd like to end this post on a more positive note.  Conservation efforts are happening around the world and some truly wonderful things are happening out there.  Recently we went to a presentation on the California Condor along the rim at the Grand Canyon.  I'll be presenting that information with you tomorrow.  Nature is an amazing thing to behold and anytime I can be a part of it, I'm one happy camper. More tomorrow!!!
Posted by Rohrerbot at 2:00 AM

Email ThisBlogThis!Share to TwitterShare to FacebookShare to Pinterest
Labels: antelope, are there antelope in the US?, endangered, New Mexico, pronghorn, what do antelope eat?, where do antelope live?