Settling on the Moon

With the GRAIL mission set to launch soon, the moon is going to be examined yet again for lots of different reasons.  During the NASA lecture back in May, Dr. Williams mentioned that if people were to settle on the moon, the best bet would be to land around the southern pole region where a large deposit of water has been found.  Scientists are also beginning to think that there may be more water than previously thought.  GRAIL will certainly shed some light on this matter and a whole lot more including the formations of rocky planets. A study was done about the water on the moon and they discovered that just beneath the surface, they found frozen deposits.  When those deposits were exposed, they "evaporated" into space.
"NASA said Friday(6/3) it had discovered water on the moon, opening "a new chapter" that could allow for the development of a lunar space station. The discovery was announced by project scientist Anthony Colaprete at a midday news conference. "I'm here today to tell you that indeed, yes, we found water. And we didn't find just a little bit; we found a significant amount" -- about a dozen, two-gallon bucketfuls, he said, holding up several white plastic containers. The find is based on preliminary data collected when the Lunar Crater Observation and Sensing Satellite, or LCROSS, intentionally crashed October 9 into the permanently shadowed region of Cabeus crater near the moon's south pole. 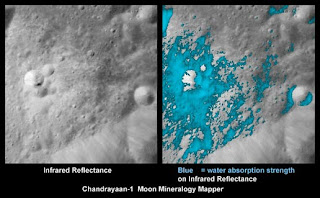 Until recently the moon was regarded as bone dry – more desiccated than the most arid desert on Earth. That perception has changed recently with the discovery of significant amounts of ice near the lunar poles, first from satellite observations and then from the 2009 US mission to smash a probe into a shady crater. A new study, published last week in the journal Science, shows that there is also far more water inside the moon than lunar geologists had realised. And it raises questions about the favoured theory for the origin of the moon: that it formed from material ejected by a huge impact in Earth’s early history. The NASA-funded researchers re-examined lunar material brought back to Earth by Apollo 17, the last manned expedition to the moon, using new microprobe technology that can detect the presence of chemicals on a microscopic scale. They focused on volcanic glass beads, coloured orange by their high titanium content, which formed about 3.7bn years ago when volcanic eruptions were still taking place on the moon. The beads contain “melt inclusions” – tiny samples of the moon’s molten magma that were trapped inside crystals before the eruption.  “In contrast to most volcanic deposits, the melt inclusions are encased in crystals that prevent the escape of water and other volatiles during eruption. These samples provide the best window we have on the amount of water in the interior of the moon,” says James Van Orman, a geologist at Case Western Reserve University. The results show levels of water around 0.1 per cent. That is 100 times more than scientists had found earlier with simpler technology, and similar to the levels in solidified magma collected from mid-ocean ridges on Earth. Amounts of other volatile elements such as fluorine, chlorine and sulphur were also much higher than measured previously and close to those found in corresponding terrestrial material.Although the study points to the Earth and moon having a common origin, it is not consistent with the giant impact theory, because the water would have been driven off into space as vapour by such a cataclysmic high-temperature event. So the authors say that ideas about the early solar system may need revising. The study also gives a new twist to the origin of ice detected in craters at the lunar poles. The usual explanation is that the ice was brought to the moon by bombardment over billions of years from water-rich comets and meteoroids. But it now seems possible that some of the lunar ice came from within the moon – released by past volcanic eruptions." End of article.  Source:  http://www.ft.com/cms/s/2/493de45a-8bef-11e0-854c-00144feab49a.html#axzz1ONCM7xhR
So while constructing a space station may be some time away, it appears there is a better chance of it with the presence of ice.  There are a million things to consider when it comes to colonizing the moon....How would one process the water?  Also let's not forget the space debris that likes to hit the moon....on Earth it gets eaten up in our atmosphere. There are many other things to consider, but imagine the scientific opportunities that await us in the stars.  Unfortuneatly, I've come to an end on the science part of this series.  I hope you've enjoyed the NASA presentations as much as I have. Comicons or conventions are more than just comic books and geeks coming together. Fiction helped us imagine the possibilities and many scientists are doing what they are doing today because as kids, they were inspired by the infinite possibilities of our universe. As Mr. Spock would say, "Fascinating." One last look at the Phoenix Comicon tomorrow.  Until then.....
Posted by Rohrerbot at 2:00 AM