As a kid, I remember staying home on Friday nights while my parents went out for a "date".  I'd have to babysit my younger siblings.  After they went to bed, I'd turn channels on the newly purchased "cable box" for our home.  I'd switch between MTV, Nickelodeon, and the local TV channels.  Click, click, click went the white dial on the 80's brown colored box.  We didn't have the thick and large remotes to turn channels so everything was done by hand back then.  Channel surfing was a bit more difficult because of this little minor inconvenience.  Sometimes I'd become too tired to get off the couch and just let the channel stay on one spot.  Two people quickly became my childhood favorites.....the astrology guy Jack Horkheimer who allowed us to Star gaze and Elvira....Mistress of the Dark! 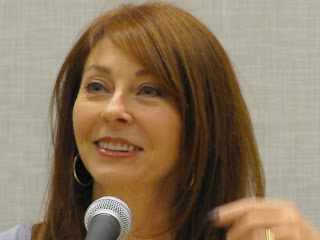 Today's post focuses on Cassandra Peterson...the person who plays Elvira.  I was originally planning on visiting Billy Dee Williams, but discovered, by accident, that Cassandra Peterson was presenting during the same time!  Elvira trumps Lando Calrissian anyday!  I don't know why I am fascinated by this actress, but I think she touched upon a favorite childhood memory of bad(and when I say bad....I mean TERRIBLE) horror flicks with funny narrations by Elvira.  Was it because she looked like a drag queen?  I'll never understand my fascination by her.....but she was and is still cool. 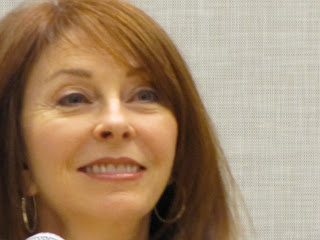 I went to hear her presentation and found her quite genuine and funny.  There were some very strange people in the room which is to be expected.  They should have had their own film!!  Yet she answered the crowd with smiles and fun stories. 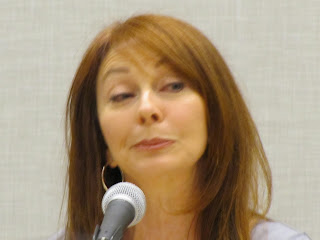 Okay, here's what I thought was amazing.  I was a kid when she was on TV.  Today, she looks exactly the same as she did 20 years ago!  Ms. Peterson I hope you go another 20 years! It was a really fun hour learning about the beginnings and history of Elvira.  She owns her character 100 percent and mentioned that it is difficult at times because she has to find the funding for all the various projects herself......to me, that states that she's smart and a hardworking person. 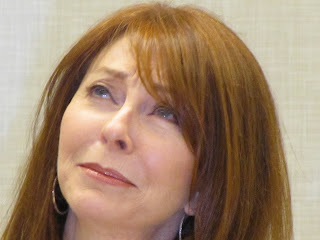 PS.  I caught the last bit of Billy Dee William's presentation and am glad I skipped it!  That's all I'm going to say on that topic.  I hope you've enjoyed the Phoenix Comicon series.  We'll go back to plants and the garden again for a bit with some information I've collected from various lectures and presentations that happened over this past summer.  It's good to mix things up every now and again:)
Posted by Rohrerbot at 2:00 AM