Continuing on with our scifi and space theme this week, we'll explore interesting neighbors next door to our own solar system....over 1200 to be exact within a region of space known as Kepler.  But before I begin with my notes on this blog, I discovered, by accident, that a childhood icon of mine passed away last year!!!  I don't know if any of you remember the midnight program Star Gazer(previously known as Star Hustler) on PBS that lasted for about 5 minutes with Jack Horkheimer, but it was my favorite thing to watch before PBS signed off for the night.  Plus I love the theme song, Arabesque #1 by Claude Debussy.  When I hear that tune, my mind wanders a million miles away from Earth. Anyhow, he has passed away and I was sad to have read that on the internet.  Jack inspired kids like me to look up into the night sky and try and find Mars......and even if we couldn't, he made it sound fun and exciting.  Today, men and women continue working with the stars.  I'm not jealous, but I wish I could do what they do. Lots of math is involved and that subject has always been a certain fail with me:)  If I were thrown into the future of Star Trek, I would be the communications officer because my skill is in language. So I'm okay with not understanding math:)  Anyhow RIP Mr. Horkheimer, I'll miss you.
Back to the Kepler Mission!  Exciting stuff folks. Again this information is from a presentation back in May by Dr. Williams of ASU.  Basically, there's a solar system next to our own beyond Pluto that has A LOT of planets orbiting another sun.  It's promising because there are several planets within the habitable zone of that solar system. All this means is that any planet from around the same distance as Earth from our sun is potentially capable of life.  Now this is just the start of defining where life exists in our galaxy.....but it's a start and there's a spacecraft on the way to explore this possibility! 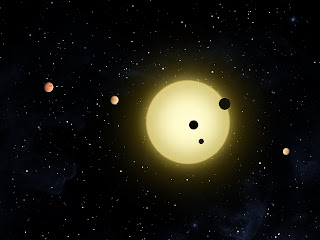 Here's the official write from NASA on the Kepler Mission.  "Kepler will be the first space mission to search for Earth-size and smaller planets in the habitable zone of other stars in our neighborhood of the galaxy. Kepler is a special-purpose spacecraft that precisely measures the light variations from thousands of distant stars, looking for planetary transits. When a planet passes in front of its parent star, as seen from our solar system, it blocks a small fraction of the light from that star—this is known as a transit. Searching for transits of distant “Earths” is like looking for the drop in brightness when a moth flies across a searchlight. Measuring repeated transits, all with a regular period, duration and change in brightness, provides a method for discovering and confirming planets and their orbits—planets the size of Earth and smaller in the habitable zone around other stars similar to our Sun. The centuries-old quest for other worlds like our Earth has been rejuvenated by the intense excitement and popular interest surrounding the discovery in the past decade of more than 250 giant planets orbiting stars beyond our solar system. With the exception of the pulsar planets, most of the extrasolar planets detected to date are gas giants. The challenge is to find terrestrial planets, which are 30-600 times less massive than Jupiter. Kepler is specifically designed to search for Earth-size and smaller planets in the habitable zone of solar-like stars out to distances of about three thousand light years. 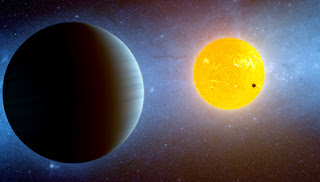 Kepler will continuously monitor over 100,000 stars similar to our Sun for brightness changes produced by planetary transits. At the beginning of the mission, planets of all sizes orbiting very close to their stars will be found. After three years, we will be able to discover planets with orbits of one year, that is those in the habitable zone of stars like the Sun. If Earth-size planets in the habitable zone are common, then life may be ubiquitous in our galaxy. On the other hand, if no terrestrial planets are found, then “Earths” may be rare."  End of article. Source:http://www.nasa.gov/mission_pages/kepler/main/index.html  Well in my humble opinion, you can't base an entire Universe on one mission.  Life may or may not be unique, but I'm pretty sure it's out there.  Whether this system has them or not shouldn't determine whether "Earths" are rare.  The galaxy is a big place....even more, there are galaxies galore beyond our own with billions of solar systems!  Why do we have to put our energy into killing people when we could be working together for a better tomorrow? Imagine if Pandora really existed...... 54 planets have been discovered within the habitable zone where liquid water can exist.  5 of those planets are Earth size.  Imagine what scientists will discover!  NASA vid below. As my friend Jack Horkheimer said every night before signing off......"Keep looking up!"

Video and pics courtesy of NASA.  This video found with the NASA link above.
Posted by Rohrerbot at 2:00 AM