Remembering.  Connecting.  Feeling.  These are all things that come together when I watched these two great men present.  Leonard Nimoy spoke of his life while George Takei spoke about the many political things going on in our country.....and focused on diversity and defending those in the LGBT community.  While both these men were presenting, I remembered my own childhood.  Here is my connection with these two wonderful actors.  As a child, I was forced to watch Star Trek reruns with my mother while folding laundry on a cold winter's day. I had two options....shovel snow with my dad or stay inside the warm house and fold laundry with my mom(and do dishes).  Laundry was a major project in our household of 8 people. TV was not negotiable and it was what mom wanted to watch. So it was Star Trek or Somewhere in Time(with the late great Christopher Reeves).  I hated this show so much.  It was boring to me and my siblings, but it was on ALL the time in the 70's.  Even worse, if I went over to my grandparent's house, I'd have to watch it with my grandpa!! At the time, Star Wars was way cooler! Lightsabers, aliens of all shapes and sizes, awesome music.......well Star Wars was my world as I collected all the toys.  Today I still have all of them in boxes in my closet. What I wouldn't do to go back in time to relive those innocent days! My grandfather and mom used to take me to all the Star Wars and Star Trek movies as a kid. It would just be the 3 of us unknown geeks sitting down and watching these movies together..... and sometimes we would go back twice!

Again, these characters were like family to me because they were embraced by some important people in my own life.  My grandfather and I would do a lot together....shop for the perfect shortcakes to make the perfect desert for my grandma, go on drives around town, go fishing on the lake.....and so many other things.  But the Star Trek movies were something the three of us did together ALWAYS.  We take so many things for granted in life......especially with the people we love the most.  Little did I know that Star Trek 4: The Voyage Home(the whale one:) would be the last time I ever saw a Star Trek movie with my grandpa again. Today it's still one of the big losses of my life....even though it has been 24 years since he has passed away, I miss him as if it were yesterday.  He was my best friend as a kid growing up.  Today I carry his torch by carrying on with his jokes and watching Star Trek. 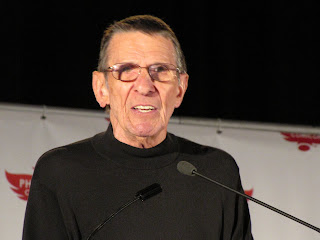 Standing next to these men was like standing next to adopted grandparents.  I imagined my grandpa with me as I had my picture taken with these gentlemen. Eventually I began to appreciate Star Trek more than Star Wars because it spoke about diversity and embracing new ideas and cultures. My first book that I ever read was Watership Down.  My second book was a Star Trek book that I had to read for my Freshman year of high school.....and I haven't stopped reading since!  Some of my favorites are Life of Pi, Water for Elephants, Lord of the Rings, and many many more! 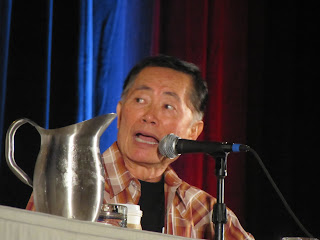 Hearing Nimoy talk about his life really connected me with those childhood years growing up with him.....in programs like Search for Tomorrow, Transformers(the animated series), etc. because they were all memories with my family. You may say that I think of Nimoy as a "god" and you'd be right.  He was genuine and witty with a strong life message.....live with honor.  Make decisions that honor who you are as a person and those that surround you.  It was quite beautiful.  The hour flew by and before I knew it....Nimoy was gone. 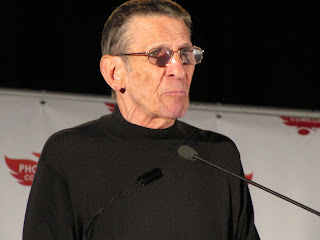 While I didn't care for the character of Sulu much as a kid, I have grown to really respect this actor today.  What I like best about Takei is that he is making a difference now in his stand against discrimination and hate crimes in the world.  He spoke of his days trapped in the Japanese confinement camps within the US and how that affected him as a kid growing up. Takei has recently come out of the closet and has been vocal since for the rights of the LGBT community.  He also shared a story about how Tennessee is trying to pass a bill to prevent teachers from using the word "gay" in the classroom.  In a strong statement, he said that our citizens have  the "Right to Free Speech" and preventing people from using any word was against the rights of the American people. I agree.  If this bill passes, it will be one of the most stupid things that ignorant and hateful people do to others.  George told the audience that if teachers needed to use the word "gay", they could replace it with "Takei" instead.  Everyone clapped and cheered at the suggestion.  I should also mention that this bill is directed at Elementary and Jr. High School teachers and that Takei said that all words must be used responsibly but also that they shouldn't be denied as it goes against our rights.  Some of you may be thinking, "Well you shouldn't be teaching that in the classroom anyway!"  I agree and so did Takei, but as a teacher with my own class, I thought of why this bill is ridiculous.  We teach kids to accept all walks of life especially me with my background on Spanish culture!  A lot of students like to use words like "gay" or "retarded" with one another and to me that is not acceptable in my own classroom and this is exactly the moment when a teacher needs to step in and correct this inappropriate behavior. For this reason, my respect for Mr. Takei has shot up tenfold!
It was a day come true meeting some of my heroes growing up.  I went with the spirit of my grandfather next to me and snapped a shot for my mother.....and for one moment, we all stood together remembering the past.  I forgot about my mortgage, watering the plants, and the various mundane routines of life.....and felt happy and connected to my inner core.  The afterglow lasted several days afterwards......and I'll never forget this weekend of legends and science.