In life, we sometimes make imaginary bonds with people that are on screen or from a book. My youth was no different.  Even today during life's little trials as an adult, I still have those attachments which act like a security blanket that comforts me when I need escape.  I grew up watching Wil Wheaton on TV always wondering what it would be like to be a child actor.  During my awkward high school years, I struggled with my identity, like most teenagers, and escaped into the world of science fiction.   In my imaginary world, I have always dreamed of leaving the planet Earth for the stars and Star Trek allowed me the chance to escape my reality.  Like my Grandpa and Mother, I joined the realm of the exciting and unknown.  Each week I followed the voyages of the starship Enterprise as it explored new planets and met strange aliens. I was a freshman in high school when Star Trek: The Next Generation began and Wil Wheaton was part of the cast.
Both of us were the same age and both in our teenage years. Everyone made fun of Star Trek(sometimes they still do...but I don't care anymore:), but having someone from the same age group seemed to make it okay to watch TNG.  Eventually, we grew both grew up to be 39 years old.  He is turning 39 this month and I'll be celebrating my birthday in October. Seeing him in person and hearing his voice made me smile and think about how much time has passed in my own life. During his presentation, he shared with the audience that he really enjoyed writing.....something I also enjoy doing now. Beyond having the "writing bug", I discovered that we had a lot more in common.....a relationship, travel, and a similiar snarky sense of humor.  It was great to see someone having fun in their 30's.  Sometimes I see a lot of my peers and siblings irritated that they can't always do the things they want to do because of kids, their work, or marriage. Life is, of course, what you make of it.  Both of us have blogs and both of us have found writing to be quite exciting.  Even better, I think we're both more comfortable in our own skins as adults and people.  So while my imaginary friend and I have taken different paths in our lives, we still have taken on similiar interests.......and it brought me a strange comfort.  Why should it matter?  I think many people sensationalize an actor's life thinking it's awesome.  Some parts of it seem cool, but I don't think I'd want that life. But it's comforting to know that the people we enjoy watching on TV have somewhat normal lives just like everybody else. Now if he reads this blog, his response would be, "That sounds &*%^$ %$^!" And I'd laugh because I would probably say the same thing.  However, I have students who like to pop in every now and again and read my work so I have to keep it clean:) Anyhow, if you read this Wil, I get it, but I just wanted to thank you for the fun time we had up at the Phoenix Comicon.  It was a good escape after the school year ended. 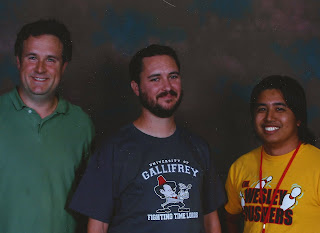 Bazinga!
So this blog sounds as if I am a stalker and that isn't the case at all.....just a huge fan and geek at heart. It's about the respect I felt for this actor as a kid as well as the appreciation for the work he's done and continues to do.  Conventions allow us to meet these imaginary and timeless friends in person and connect with them via stories from their real lives, etc. In many ways, it's like visiting an old friend who you haven't seen in awhile.  It was great to finally meet this funny and witty blogger. Stay tuned for more personal stories and science info from the Phoenix Comicon.  I have a lot of reporting to do....I'm working on my Panama posts right now from our work with the turtle program in Bocas Del Toro as well as our adventure from Coiba Island.....plus some features on the local flora and fauna.  So much to write on plus several updates on the garden.....Until tomorrow!
Posted by Rohrerbot at 2:00 AM