Recently I found two pictures of my first attempts at sprucing up the Fern Garden of El Presidio.  My wonderful neighbor snapped a couple shots and told me that I should keep a visual record of the garden to show people where I started and where I will go with my project.  I thanked her and took the pics putting them away and thought of kicking myself for not keeping a visual of the space before I touched it so you'll have to imagine that there was a dead Euc in the middle of the space leaning against the building and nothing else except for the beautiful San Pedro Cactus on the side:) 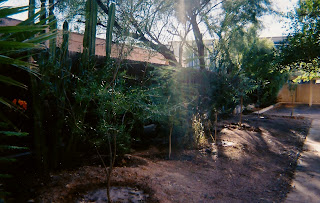 Today I have a better camera and better shots are taken of the overall property.  What has changed since this photo was taken in 2007? Let me give you one more angle..... 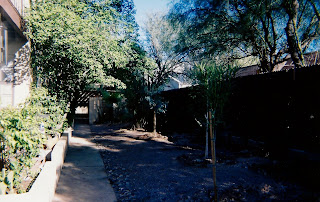 Being too critical of my work, I still see the imperfections in front of me. A lot has changed within a matter of 3 years and a lot of money and time has gone into making things worse before making them better. I loved the side planters but had to remove them because the rain would enter the inside of our building through the walls.   The other planters seem to be fine around the place but the grade was angeled poorly on this side allowing for water to enter into the home causing structural damage.  New trees were added to the sides.  Among some of the trees added were the Arizona Ash, Chinese Elm, and Desert Willow. The Chinese Elm, in the middle, would eventually die from Texas Root Rot. The palm would later be removed as would the large Ficus tree leaning from the planter on the side of the building. Of course, more work is still needed today as is digging.  I'm hoping that within the next year and half to have this side completely redone. Today it is not the sun searing southern side it used to be like when we first moved in, but instead a breezy and shady corridor.

Email ThisBlogThis!Share to TwitterShare to FacebookShare to Pinterest
Labels: a look back on El Presidio Gardens, El Presidio 2007