Here's an interesting report on another reserve being put aside for this amazing and elusive animal in the Vietnam-Laos area. This is a break from the garden on our interesting and fascinating world by Andrea Mustain. Pictures from David Hulse.  This is the story today reporting out of MSN..... 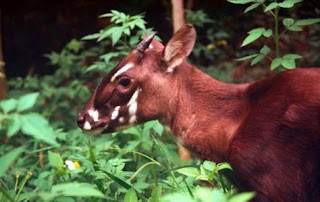 "A new protected area designed to save one of Earth's most mysterious and elusive creatures has been established in a lush, mountainous region of Vietnam, officials announced Wednesday. The creature, the saola (known colloquially as the "Asian unicorn") is a small, horned animal that resembles a strange goat-antelope hybrid, but is more closely related to a kind of wild cow.  "It's a very beautiful forest ungulate, and really looks like nothing else in Asia," said Barney Long, manager of the Asian species conservation program at the conservation group WWF and a key figure behind the creation of the newly established Saola Natural Reserve, which covers an area about three times the size of Manhattan along the Vietnam-Laos border. 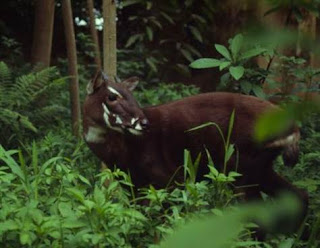 Long said saola first got their mythical nickname a year or so ago — in spite of the fact that the animals have more than one horn.  "They obviously have two horns," Long said, laughing, "but it is a cylindrical horn and pretty straight, so if you look at it from the side, it looks a bit like it has one horn."  However, it was chiefly the animal's elusive nature that earned it the fairytale name, Long told Our AmazingPlanet.  "It's so rare to see that it would almost be like seeing a unicorn," he said.
Indeed, scientists only discovered the critically endangered species in 1992, making the saola one of the last large mammals discovered on the planet, and one whose population may number in the few hundreds. Even when Vietnamese scientists first identified the new species, it was only through skulls that villagers showed them in the isolated region of the Annamite Mountains where saola live, an area fit for fairytale creatures. Waterfalls festooned with vines and orchids tumble down steep slopes covered with evergreen rainforests, countless streams clatter over rocky beds, and palms as tall as a man crowd the steamy forest floor. Adding to the allure and mystery of saola, any creatures taken alive die after just a few weeks in captivity.

Just last year, villagers in Laos captured a male saola. It was the first confirmed sighting of the species in a decade. But the creature died a few days later. Long said scientists think there are three reasons behind the saola's bizarre and fatal reaction to captivity. "When they're in captivity they seem to act extremely tame, and they're very open to having people come up to them and touch them," Long said, but explained that the docile behavior is actually a sign of extreme stress. "The animal is freaking out," he said.  In addition, the animals may be injured when captured and are likely fed things — rice, bananas, grass — that aren't part of their natural diet.

Although saola don't appear to be targeted directly for hunting, they are inadvertent victims in snares set for other wild animals — the wild meat trade, including tiger meat, is big business in Vietnam's restaurants.
Conservation organizations and scientists from around the planet are working to design a method to better study and understand the rare creatures, Long said, and are urging authorities in the region to crack down on poaching. Today's announcement establishes the fourth protected area in suspected saola range, and Vietnamese officials said the new park is intended to protect not only the Asian unicorn, but to save the other unique species that dwell there. Long, who spent many years trudging through the Annamite Mountains' wet, tropical forests, said despite the discomfort, heat and dampness, the region is unrivaled in its biodiversity. "It really is an amazing place," he said. "  End of article.  Source: http://www.msnbc.msn.com/id/42596870/ns/technology_and_science-science?gt1=43001

There you have it.....another great mystery into our very large and beautiful world.

Posted by Rohrerbot at 9:57 AM