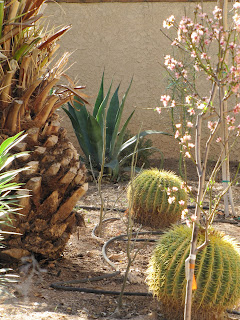 After our severe and devastating frost of 2011, many plants both native and non-native took a turn for the worse in the city of Tucson.  Spring has arrived and has brought a sense of hope for many people.  This frost event was the hardest on palms, cacti(especially the prickly pear), and tropicals.  I began my garden journal series because of this historical frost. The last major frost like this was recorded almost 40 years ago.  This two part series will talk about what survived and what has died at El Presidio Gardens.  Today's focus is on hope and survival. While several plants took a turn for the worse, many came out on top. 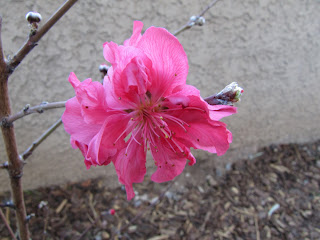 The fruit trees.  Many people worry about their fruit trees and cold nights.  The simple fact is that Tucson doesn't get cold enough to kill a peach or apricot tree.  Most fruit trees grow in harsher climates and therefore seem to do well here in Tucson.  Take for example the apple tree from Western Asia.  It grows in a colder climate but also endures hot sun. China is the number one producer of apples, followed by the United States, then Iran, Turkey, Russia, Italy, and finally India. In fact, the more chill hours you get(anything below 45 degrees), the better chances of fruit you'll have on your tree. With the extreme cold weather, all fruit trees, exluding the citrus, did extremely well.  We are looking forward to some wonderful crops this year at El Presidio.  Of the fruit trees, all which have leafed out, the apricot, peach, persimmons, apple, mulberry, loquat, guava, fig, nectarine, plum, and pomegranate trees are healthy and performing well. 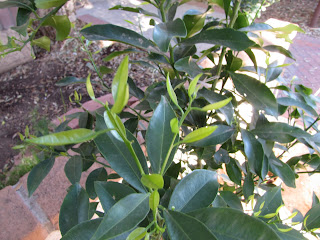 The citrus trees. This is the most interesting report of the Spring.  Moro oranges and Valencia oranges have new leaves and are recovering well.  The same goes for the grapefruit and kumquat trees.  The Dancy Tangerine is fine as is the Tangelo.  All reporting new growth.  The lemon and lime will be on tomorrow's post. 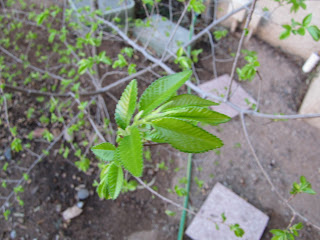 Cacti and Euphorbias.  Sadly, and I do mean this, our native desert cacti took a hard hit.  I didn't realize how much I loved cacti until they were frozen completely back to the ground.  Most will not be coming back. However, the purple Prickly Pear (Opuntia) survived and the Nopal colonies, while they took the biggest hit, still have some pads that will eventually begin new growth as it gets hotter. The surviving cacti were much older and any of the younger cacti were completely killed.  Our San Pedro which headlines this blog, took a huge hit.  I cut it back to nubs where it will hopefully grow new limbs again.  The bottom limbs are a healthy green and indicate new life.  All other San Pedro Cactus were killed.....except one mysterious little offshoot. 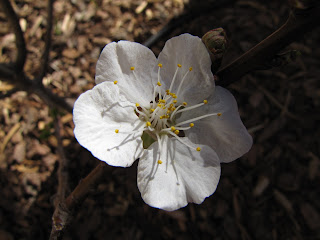 Bamboo was unaffected and has new green shoots coming from it.  The Mountain Laurel is a tough plant which never showed any signs of frost burn at all.  Oleander are recovering as are the bougainvillea.  Desert trees, like the Chitalpa, Desert Willow, AZ Ash tree, Eucs, Chinese Elm did well.  Live Oaks were unaffected as were Xylosma.  Nandina turned purple.  Crepe Mytle came back fine. Cape Plumago died back to the ground, but shows new signs of life at the base of the plant. The Mesquite trees all lost their leaves but are currently both showing new signs of growth.  Lantana is also growing back sporadically.  Some plants completely died. 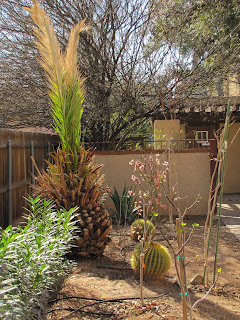 Palms.  Canary Palm took a big hit but it is recovering as is the California Palm. 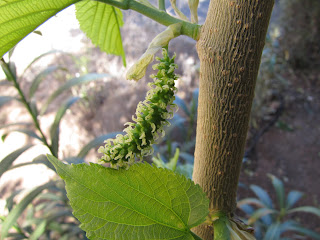 Vines all report healthy and show new signs of growth. 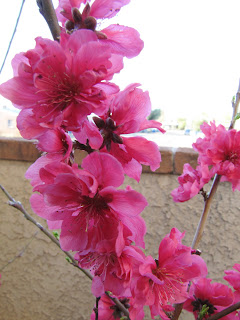 Agaves took a huge hit....especially the Aloe Vera. Very few Agaves remain on the property as most were completely killed.  The only surviving Agaves were those protected by the top Agaves in their colonies. 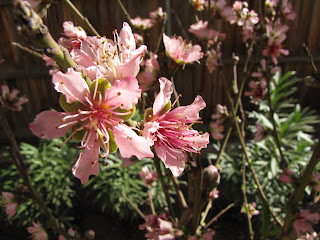 Jacaranda, my most sacred tree, shows signs of life.  New growth is forming on the lower limbs of the tree and will hopefully work its way up. 2 of the younger Jacs are completely dead. 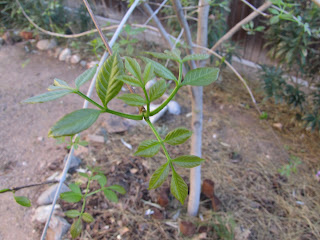 There you have it.  A list of things that survived and are coming back.  It was an extreme winter that made many gardeners cry, stress out, or get discouraged by the massive damage.  I was able to save MOST of our landscape by having a Plan B and covering the frost sensitive plants. Tomorrow, we'll take a look into the plants that I will have to replace.  Until next time......
Posted by Rohrerbot at 3:00 AM