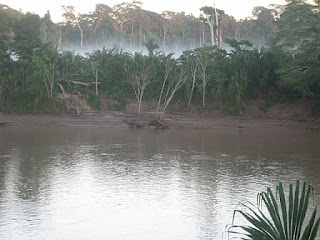 The city of Puerto Maldonado used the Tambopata river for the deforestation efforts going on in the Amazon.  How?  Simple.  They cut trees down and let them float on the river towards the wood mills awaiting their arrival for processing and shipment.  The majestic and beautiful mahogany was their precious export.  I remember having some anger.   It was directed not only at Peru for the tree slaughter but at other countries such as my own, the US, for purchasing the wood from this town.  Do people even know they are supporting this?  I don't think many people realize what's going on out there just as long as their lives are uninterrupted to text and eat fried food.  Anyhow, I soaked in this "human progress" thinking, "It will get better. " Well it got worse before it got better.  We headed down the river leaving this ugly human stain behind and entered the first zone of the Amazon.  Here, we witnessed a poacher slaughtering a group of peccaries crossing the river in broad daylight. The "good news" is that the guide wrote down this incident and reported it back to the park officials.  I don't know what the outcome was, but I did overhear the Spanish conversations to know that the incident was taken seriously.  Once we left "sin city", we entered the protected zonal reserves of the Amazon region.  This trip on the river took about 5 hours. We saw monkeys, parrots, caiman, and a jaguar on this incredibly stunning waterway!!! 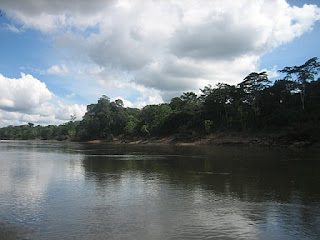 To get anywhere in the Amazon or Manu reserve, you have to take a boat.  From what I understood, there were 3 zones.  In the first zone, native people could farm small tracts of land.  The second zone was where we stayed at the eco-lodges while in the 3rd zone, no human people were allowed at all without a permit.  AND some of it was for scientific study ONLY beyond a certain area!  Before we took this trip, I thought that I was going to be disappointed that I didn't get to see the virgen Manu Reserve, but later it proved to be an unfounded fear. The Manu Reserve is VERY expensive to visit while the ecolodges outside that zone are much more affordable.  So what's the difference between the two zones?  If you are wanting to see Blue and Gold macaws or the Giant Otters, your best chances are in the actual reserve, but they can be spotted outside the zones. 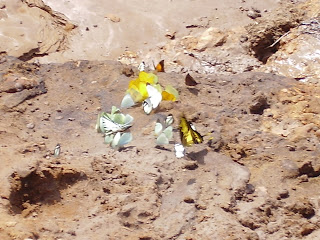 Along the way, we saw incredible colors flashing about on the shores of the river.  I took my terrible camera out and snapped these okay shots.  I can only describe to you some of the magic that we experienced on the Tambopata.  My camera would have never captured the night sky as it appeared the evening we searched for caiman in the river.  We turned off ALL lights and sat in our boat for several silent moments.  I had experienced quiet moments like this before, but this particular experience was different.  Water. River. Sounds from the midnight jungle.  And the brilliant lights from the galaxy above us. No people. No city lights.  Just us, safe within our boat in the middle of nature. 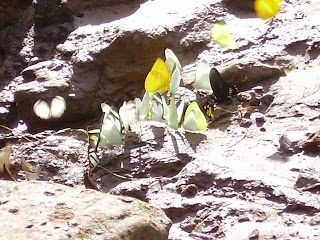 At early dawn, we got up to head over to the clay licks where parrots and other birds go to do their morning ritual.  We docked our canoe on shore and headed up the muddy hill towards the lookout and waited.....and waited.  While we sat there patiently, I got some great shots of the Amazon dawn. 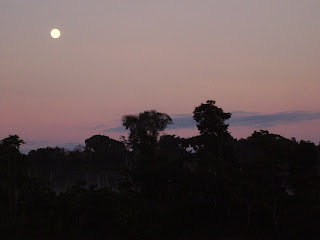 We had a canopy over our head while we were on this boat, but it's still best to wear a cap and protect your scalp from the instense sunlight.  It's strong.  Like all rivers, there are places that are treacherous and places are safe to pass.  Our guide knew the passages well. 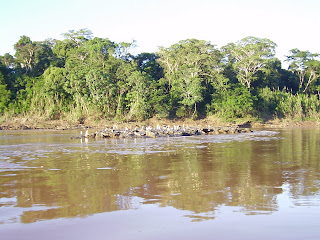 My best recommendation is to remain quiet once you enter the zones for optimal wildlife viewing.  We spent a portion of our time on this river and took advantage of the amazing flora and fauna opportunities it provided.  I also want to mention that for the first time in rain forest history, I was not uncomfortable at all.  The humidty was so low that I was able to relax and absorb the experience better.  We had gone during the "winter" months in June which had cooler breezes coming off the Andes mountains. 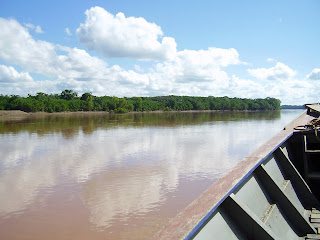 My friend Jen captured me here chewing my nails like I will do occassionally when I am nervous.  It's such a bad habit and I don't know where I picked it up.  At least I don't chew the hair off my arms like my Dad does!!!  Bizarre stuff.  What do you do when you get anxious? I think we were heading into some muddy areas from the shoes I'm wearing and didn't want to sink in the mud as I had done when we first arrived.  I had brought my water shoes but since we were hiking, I left them behind.  There is nothing worse than mud all over your clothes because it's so hard to get out....especially when you're on a trip with a limited supply of outfits!!! 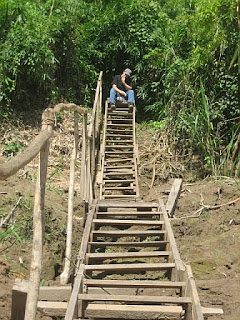 This was one of my favorite parts of our journey to Peru.  Although to be honest, I had a lot of favorite moments in this country.  What I loved best about this part of our trek was that we had great weather and were able to relax a bit before some major hiking.  Monkeys got into everything which included my backpack!!  But that is another story.  Once we left the rain forest and flew back up into the high altitudes of Cuzco, my headache returned for the remainder of our trip. 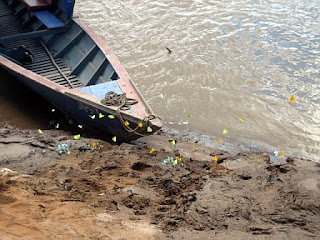 The Tambopata river flows through the Tambopata Natural Reserve. If you know you'll be in Peru for some time, take a flight out of Cuzco or Lima for Puerto Maldonado.  Most of the ecolodges will be awaiting your arrival at the airport.  Once that happens, you'll be bussed to the river from Puerto Maldonado.  Our flight from Cuzco to the Amazon was really cool.  We went from icy mountaintops to green green green rainforest as far as the eye could see.  When we landed, I remember the warm and breezy air.  It was like paradise.  Cuzco gets cold, but in the Amazon, it was perfection.  Until tomorrow....
Posted by Rohrerbot at 2:00 AM