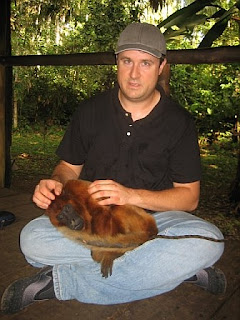 Talk about lucking out!!!  We were the only 2 people staying at this lodge for about a week!  It was quiet and relaxing the entire time. Today, we are going to look into this incredible place that is located off the Tambopata river near the Manu Reserve! A lot of people think that these ecolodges are just places to sleep, but they offer much more than a bed.   We had a guide by the name of Robin who was a local from the area.  Our experience was enhanced by his knowledge of the forest. The lodge is situated on a patch of forested land off the river.  We docked our boat and climbed up some wooden stairs.  A hike on a shaded path would eventually lead us to the beautiful and open Inotawa lodge where we would spend our nights under a mosquito net. 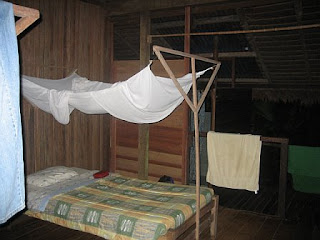 I smile to myself as I remember how traumatized I was by the influx of monkeys around us.  Our room was open to the wild so at night I would turn on my light everytime I heard something.  One night it was our resident howler monkey, Pepe, digging in my backpack.  He took off with my underwear and socks.  The next night I heard some fluttering next to my net....again I turned the light on.  A HUGE bat was floating next to my head! I quickly shut the light off.  Yet another night, there were strange noises walking around in our room, but it wasn't the monkey......it was something else.  I learned to keep the lights off for a good nights sleep:) Strange critters walked around the forest while we hung out in our hammocks.  I'd be chilling and looking out into the woods between our excursions and see a weird animal come out from hiding.  There were several critters that looked like crosses between rabbits, pigs, rats, cats, and racoons.  Today I think I could identify them better, but because it was my first time into the Amazon, I hadn't expected seeing these bizarre animals. 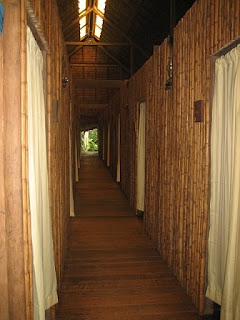 It was really a wonderful experience.  Inotawa makes some great meals.  Plus our guide ate with us and spoke about anything and everything.  Robby,or pronounced "Row-be", spoke only Spanish (which was a requirement for us on this trip) told us of his days as a poacher until the old man(a ghost) of the forest attacked him and threw him to the ground.  He was given one chance to correct his mistakes and so he chose to educate people about nature.  Normally, I wouldn't believe this stuff, but while he told his story, his hands shook and he became nervous.  He made me believe that there was a "Pacha Tata"(Old Man of the Forest/protector of all living things) and a "Pacha Mama"(Mother Nature or Lady of the Lake).  He believes that if the Amazon and other similiar places are wiped away from this Earth, we will have destroyed ourselves and the magic that lies within our world. Scary stuff. 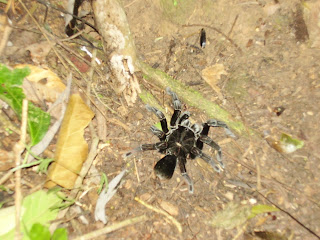 The lodge is fun because there are trails all around it.  Just be careful where you step as we were attacked by ants in the darkness while searching for bugs.  I heard my friend yell out, "ouch! ouch!" and then I found myself burning up around the leg area.  We turned our headlamps on and discovered big ants on our legs and the bites hurt for days afterwards.  I still have a "souvenir" scar from that trip.  We also discovered where the Harry Potter tarantulas lived while not on set for the movies.  They lived here in the forest.  Now let me explain.  We have tarantulas in Tucson, but these hairy Peruvian monsters could do some damage.  There was a nest in the ground and Robin poked it gently with a stick.  8 spiders came out! And they were HUGE. I'd like to state on the record that I am not so much a bug person. One time a coworker of mine found a dead tarantula in her garden and put it in my microwave.  Yeah....not cool. Scorpions or spiders give me the heebie jeebies. 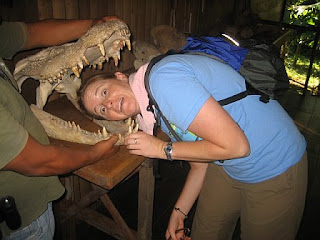 We saw plenty of caiman around the area.  This is a skull of the endangered black caiman.  There is an area on the front patio area(seen below) with a display of fossils and other interesting items to look at while waiting for your next excursion. 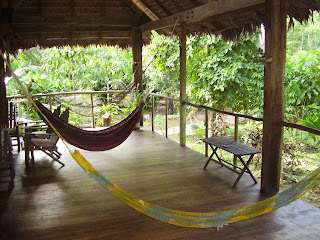 If there ever was a mascot or creature that owned the lodge, it would be Pepe.  Sometimes he was on a leash while other times he broke free and protected the property from other animals.  I think I learned to respect the power of a monkey on this trip.  He'd want me to pet him and when I stopped, Pepe would grab my hand and force me to continue.  Well, if I didn't want to pet him, he would get angry and try to kill me.  Not really:)  But he would get angry when you didn't focus all your energy on his stinky orange self:)  We really liked him a lot.  But my friend Jen really went ape over him and they hung out a lot taking siestas on the hammocks. I'll be honest, Pepe needed a shower.  On our last day, we caught him raiding the fruit bowl as seen below.  If you keep your eyes open, you'll see lots of monkeys all over the place.  During our breakfast sessions, these catlike Tamarin monkeys would try and get the bananas in the cabinet next to the table.  They threw the fruit out to them when the bananas started to get a little ripe.  Our fruit bowl consisted of some amazing selections. There weren't just bananas, apples, or oranges.  I don't remember what all the strange fruits were called, but there was a fruit from the tomato family that quickly became my favorite! 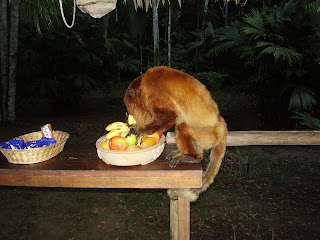 This is a terrible pic of me below, but it's the only one we have of the crew.  Robin was an amazing person who would turn out to be our favorite guide from this trip.  There were 3...Robin of the Amazon, Weynon of the Inka Trail, and Zhe(a throwback from the 70's TV show Chips with a little bulging eye syndrome going on and Farrah Faucett sunglasses).  All of our guides were great, but Robin was a genuine individual who after all these years is still fondly remembered from our Peru adventures. 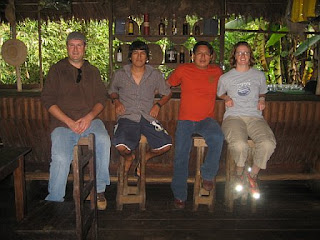 Finally, I'd like to say that I suffer the "Oprah" syndrome.  There were times when I was skinny and times, like now, were I could stand to lose some weight....like in these pictures. These were taken back in 2008.  Today I'm working on getting myself back into better shape.  It's difficult.  I love all food and my genes, which stem from the Shire(aka Wisconsin) make me who I am.  Slowly I accept these things about myself, but it is a constant battle to keep myself healthy.  My people are hobbits and I'm Bilbo Baggins....I left the Shire for adventure.  The rest of my family, all 12! AND their many little Shirelings, have remained in Two Rivers and Manitowoc. Some call me the Black Sheep, but that has a negative tone to it. My entire family and I have a great relationship.  I'm just a guy who wanted heat, sun, and the ability to garden all year round. How does that make me a black sheep? Maybe it's because I like my Mexican food WITHOUT sour cream.  I'll never know:) But my point?  Peruvian food is divine and I ate a lot of it!  I'll be getting into some of the unique dishes in several days. 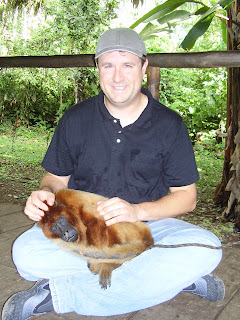 Here is some useful info on this wonderful lodge.  I highly recommend staying here if you are looking for a positive experience outside of the Manu Reserve.  Bring your camera because you'll need it!!!  There were several Scarlet Macaws that hung out in several of the trees near the lodge.  Wildlife is all around you.
http://www.inotawaexpeditions.com/
Posted by Rohrerbot at 2:00 AM