The Fairy at Montosa Canyon 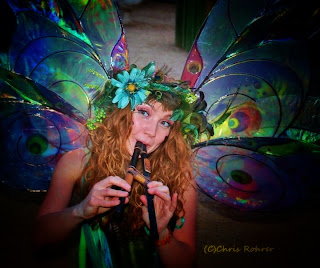 I find that the best things in life are most definitely free.  When it comes to this blog, experience has suggested that what works for Las Aventuras is the wildnerness walk.  It's one that isn't a preserve or rehabilitation center.  It's land that is untouched or maintained as a State or National Park.  I am NEVER let down by what I find on these photo shoots.  But this blog is one of a balancing act.  I dislike festivals or organized zoo events because of the limitation involved.  For example, Kartchner Caverns doesn't allow for photography or you to really touch or feel things properly.  Everything is spot cleaned perfect taking the dirty word "risk" from the other word known as "exploration".  And most often that spells "boring".  But many of my friends and family like these kinds of treks and it's a compromise.  And that's okay.   However on today's particular focus, you'll find nothing Las Vegas here.....lots of bug bites involved in our wild canyon areas. This incredibily overlooked canyon, known as Montosa, is really an amazing gem secretly hidden in the Santa Rita mountains.  There is a very healthy ecosystem here.  Untouched and unspoiled(except for an observatory by the Smithsonian), this canyon is a premiere destination(and FREE!!) in the Santa Rita mountains.  It's not difficult to find but it is hidden and overshadowed by the much loved Madera Canyon.  I found some of the most incredible groves of healthy agave and ocotillo populations here.   I have suspected that ocotillo is on the losing side of human vs nature.  But here, I found miles and miles of these beautiful plants.  And it's because of these plants that I went on the hunt for the Plain Capped Starthroat Hummingbird.  It prefers the blooms of an agave over human hummingbird feeders.  Plus the Ocotillo blooms provide plenty for the hummers in this area.  I suffered many insect bites here.  But a healthy insect population is also another indicator of a healthy ecosystem.  And the bugs were just as cool as the birds flying around the area. 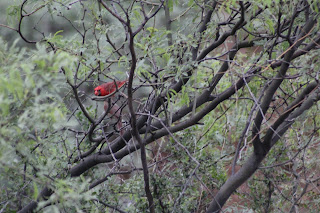 As I walked the rainy and dirt road towards the 1 mile marker and crossed two streams, a pair of cardinals guided me to this mysterious 1 mile marker that supposedly had 2 hummingbird feeders.  It was an early start at around 6:10 AM!  The Chuparosa Challenge is serious business.  However, I didn't expect to run into illegal activity on the trail.  It was probably the scariest thing I've had to deal with in awhile around the trails of Southern AZ.  You hear about it from other people but you don't expect to see it.  And then I did. The men saw me and grabbed their bags and backpacks running down one of the dangerous streams.  I had my camera slung over my shoulder.  But worse?  It wasn't the illegal aliens, it was the "coyote"(drug runner or human trafficker) that scared me.  He shot off in his van.  Me?  I jumped up onto a trail and hid behind bushes waiting for the coyote to turn around and speed down the road.....which he did.  I stayed hidden until I felt it was safe to come out.  I didn't know there were people around as I was by myself.
My heart was beating quickly and yet the nature was pretty amazing.  The cardinals were still there watching over me.  Maybe they were angels protecting me?  Birders everywhere probably groan at this idea:)  But hey, I'm writing the post so I can have fun with the interpretations.   I finally saw a few cars around the spot that I had hoped would exist.  I had gone one other time but didn't find the place.  I crossed two streams.  Shoes wet.  Outlook hopeful. 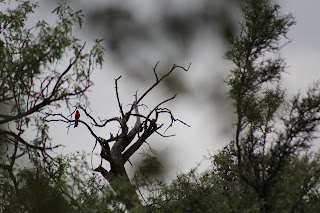 Around 10 birders sat in a nature forming bond on rocks waiting....and waiting.  The cardinals sat watching us from above.  It began to rain and we all huddled under the trees...waiting and waiting..... 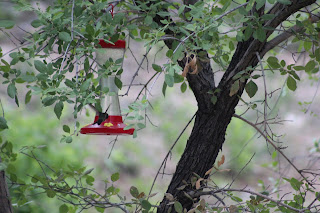 Talk.  Slow and quiet at first began to get louder as the human observers began to get impatient.  One of the questions asked was, "Who fills these feeders everyday?"  They were above a stream and full when we arrived.  My answer here is that the Montosa Fairy comes to hang these two feeders up.  But the birders didn't believe me.  I was a whack job from that liberal Tucson with a camera.   All true:) 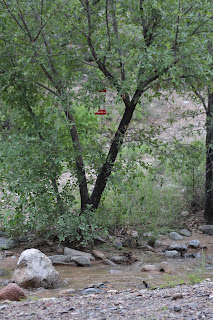 Most of the visitors were from outside of Tucson. Some drove hundreds or thousands of miles  just to have the opportunity to spot the Plain Capped Starthroat.   The experience brought a lot of interesting people together.  There was a couple from LA with a sense of humor.  They had come everyday to spot this hummer, but the wife eventually said,"Enough was enough." and they both called it quits on the search.  Their motivation?  One morning they had left and 5 minutes later, the Starthroat came to the feeders. Knowing this, it drove them mad. Then there was Gary.  An old pro collecting moths and other insects.  He set tents up at night collecting samples for the San Diego Zoo.  He was an amazing guy full of info.   Then there was a young lady from Blythe who was researching the Yellow Bill Cuckoo.  Two birder friends from Tucson came to search for the Starthroat.  And then there was the really cool retired man who has moved from the East coast with his wife to Tubac.  More would pop in and out of the pic.  Yet none would succeed in finding the Starthroat. 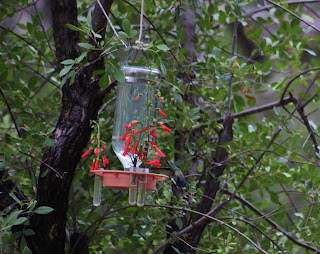 Check out this hummingbird feeder.  Again this is a simple feeder but I love the additional tubes to attract the hummers.  Penstemon and other tubular flowers are added to attract hummers that don't naturally use feeders like the Starthroat or Costa's hummingbird. 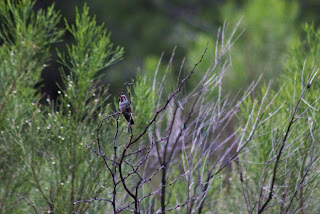 A male Juvenile Broad Billed hummingbird sits and takes a break from the rain showers around us.
And this is the Tiger Moth.  Gorgeous insect! 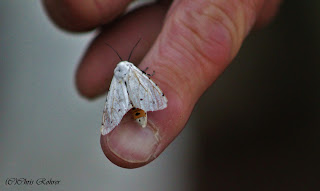 And so while the Plain Capped Starthroat never showed up, I enjoyed the visits with everyone and also the wonderful nature show around us.  It doesn't get much better than sitting under a tree during a rain storm listening to a stream run by us all. 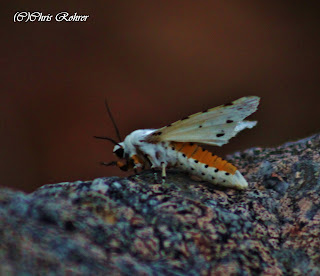 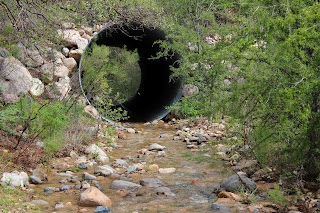 And there were a lot of bugs here.  I can't stress enough, "BRING BUG REPELLENT".  As for this write(a week later), I am still itching all over my body!  I just don't like wearing jeans.

We saw lots of hummers and it was fun.....especially the hike that followed afterwards.  I'll have two really fun photo shoots leaving the canyon for the next two days.  Really cool stuff. 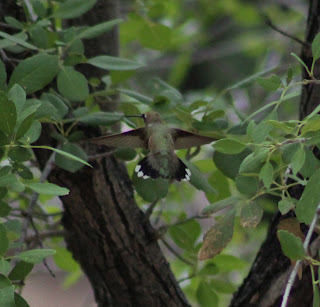 And on my way out, I was rewarded with Two Tail Swallowtails puddling on the road near the creek.  What a treat! 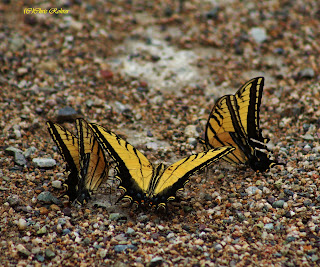 Check out this much overlooked canyon near Madera.  You won't regret the hike:) 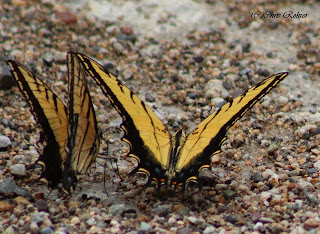 But do be aware of the things I mentioned above.  I wouldn't go at night unless you were with a group of people.  My run in happened early in the morning.  I was one of the first ones there. 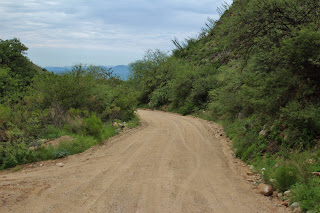 Some parts of the road are paved while others are dirt.  If you are worried about riding on the dirt part, you can park at the observatory below.  There's a parking spot for hikers, runners, etc. in the lot known as Picnic area. From Tucson, head south on 19.  Pass Green Valley and exit on the first exit Canoa Rd.  There is a huge circle spin....spin around it and go underneath the underpass.  Then take a right on the frontage road.  Head 3 miles to Elephant Head road.  Take a left.  Head down this road crossing a wash with American flags.  You'll reach a road for the observatory.  Take a right on Mt. Hopkins road.  It's all paved.  Just keep going the 7 miles until you hit the observatory.  You can park in this area and then hike up the canyon along the road or drive to the 1 km marker on the right side past the cement stream crossing and park along side the road.    Lots to see here and worth your time and effort.

I'm still out on the trek courtesy of blogger scheduling:) More tomorrow.....
Posted by Rohrerbot at 12:00 AM

My Corner of the World