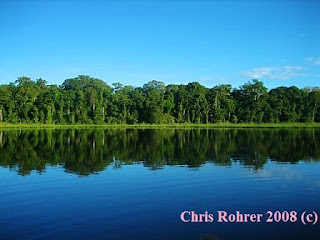 This week we're heading to the Amazon before coming back to Southern Arizona for the "After the Wildfire Series" which are photo shoots that I took in April, May, and July on Mt. Lemmon and at the Chiricahua National Monument.  After that, we'll be visiting the El Presidio Gardens and property.  Along the way, there will be stand alone articles that interested me over this past month.
One of the things I found interesting on our trip to Peru back in 2008 was an area of water in the Amazon rain forest known as an Oxbow Lake.  At first, I thought it was the name of the lake until our guide informed us that it was a type of lake found in different parts of the world. So what is an Oxbow Lake?  Here's the definition with some really cool illustrations by Ponds and Lakes .

An oxbow is a crescent-shaped lake lying alongside a winding river. The oxbow lake is created over time as erosion and deposits of soil change the river's course. You can see how an oxbow lake takes shape below:

On the inside of the loop, the river travels more slowly leading to deposition of silt.

Meanwhile water on the outside edges tends to flow faster, which erodes the banks making the meander even wider. Over time the loop of the meander widens until the neck vanishes altogether.

Then the meander is removed from the river's current and the horseshoe shaped oxbow lake is formed. Without a current to move the water along, sediment builds up along the banks and fills in the lake.