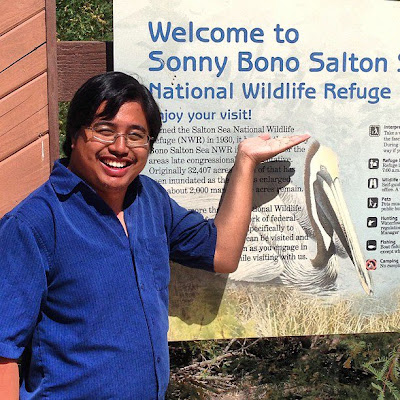 A blogger, whom I respect as a birder and virtual friend, exposed me to the great lands known as the Salton Sea.  He warned me of the shady areas and recommended I take someone with me.  Kathie, blogger friend, birder friend, and friend invited me over for tea. I had coffee instead.  We have not birded together in a long while because life has become super busy for both of us.  So instead of birding (Kathie's knee was still healing from her fall), we met at her place where we hung out and chatted about my upcoming visit to the Salton Sea.  She had gone with her hubby last year.  It's definitely a sketchy place with a whole lot of character and really dusty roads!  After hearing all the stories, it turned out nothing like we expected.  I love everyone's point of views and I especially love how one place can be different for each person.  On that night, I sat with Kathie and plotted our course.  She was excited for our trip and I wish I could have packed her up in my suitcase to come birding with us.  Gus came home and we had pizza.  He shook his head at both of us bird nerds as we mapped our way around the sea. Gus declared that he'll never be going back there again!!  So here's the breakdown from our recent trip.  Forget Unit 1.  It's off limits right now.  Head to Unit 2 of the Sonny Bono Wildlife Refuge.  It was now my turn to experience the fascinating world of the Salton Sea.  The next day we left and headed to our destination. 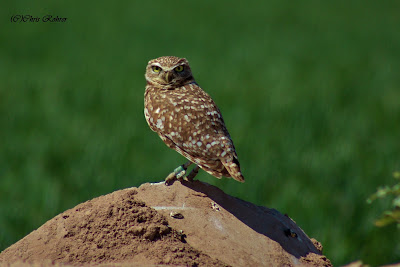 The threatened Burrowing Owls were numerous around the farmer's fields.  It became Pat's spark bird!  Sadly, these owls are losing ground due to habitat loss in Arizona.  BUT on the opposite side of the coin, I viewed them in great numbers around the Salton Sea and the Santa Cruz Flats this year.  So that is good news.  Hopefully we can help these ground birds out a little and preserve some areas to increase their populations once again.   Note the bands on this bird's legs.
People joked about Sonny Bono.  Sonny and Cher.  I loved that TV show growing up.  After their divorce, Sonny disappeared off the map as his ex-wife skyrocketed to the top.  And then after he pulled everything together, he became a respectable politician.  But as he was reaching for the top of that mountain and skiing downhill, Sonny tragically slammed into a tree and died.  For me(and for the nation), it was shocking.  After that, I never thought I'd hear the name Sonny Bono again.  Until I became a birder.
Cher became an instant star.  Loved by the media.  Her music was/is a sensation.  And Sonny Bono?  Perhaps his living legacy, the Salton Sea Wildlife Refuge will become his greatest hit yet.  And his contribution will have made a greater impact on the world we know today....some 15 years after his death. There are still challenges.  The sea continues to shrink but there are people working on the project right now who have created plans to maintain most of the waters down the road. We had a blast as we walked the Rock Hill Trail with lots of other birders and Sonny Bono fans. 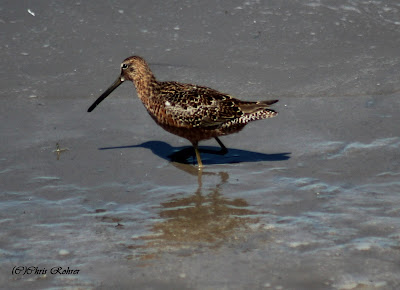 The Salton Sea was to be the great American dream full of golf courses and housing development. But that never happened the way people thought it would.  As a young adult, Sonny fell in love with this area.  As a politician, he helped restore the sea back to historic levels.  Although manmade, this area has become a very important place for birds needing to make stops. It also protects endangered birds like the Yuma Clapper Rail and California Brown Pelican.  It's also home to the large Yellow-footed Gull.  I didn't see any of them, but I did get quite a few lifebirds on this trip.
I met a Swedish couple looking at a Burrowing Owl near the sea. Their scope was fantastic. I asked them, "How did you hear about this place???!" Afterall, I'm an American and I know everything about my country;) Swallows pride.  Of course I write this last line as a joke. But seriously, how do international people know more about these places than I do!?! The Swedish couple responded, "Are you kidding? The Salton Sea is infamous around the world as one of the best places to view great birds." The humble American grumbled to himself. How is it possible that I know NOTHING about my own country!!!??? Or Sweden!!! Well truth be told, I can tell you everything about South America, Central America and Mexico. My Mexican friends also ask me the same questions and I laugh and ask them the same questions back, "How do you NOT know??" It's the best part of birding. Knowing absolutely nothing and discovering it all for the first time like Christopher Columbus did.....except maybe not. He wasn't such a good guy. But you know who was??? 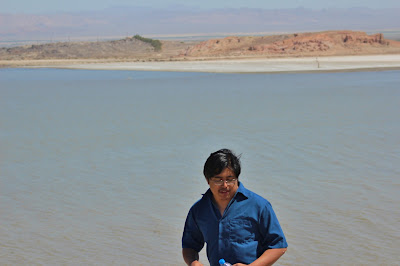 Sonny Bono.  My target bird for this day would be the Marbled Godwits.  Taking a break from the heat, we sat in a shady swinging chair as two perfect Marbled Godwits flew over our heads.  They are extremely cool birds.
As we left the refuge, it really hit me. Sonny Bono's legacy looked us straight in the eyes.....and flew off.  BUT, the magic of  being surrounded by Cattle Egrets, Burrowing Owls, Gulls, Pelicans, Terns, Dowitchers, Dunlins, Avocets, Stilts.......well that is something to be very proud of.  It was an incredible place to explore and I hope we get a chance to go back again in fall. 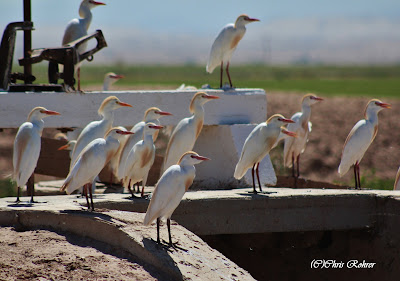 In 1998, the refuge was named after Sonny Bono on his birthday. And although he's been gone for many years, his legacy will hopefully continue to have a positive impact on birds and other wildlife for generations to come.  More from this area soon...... 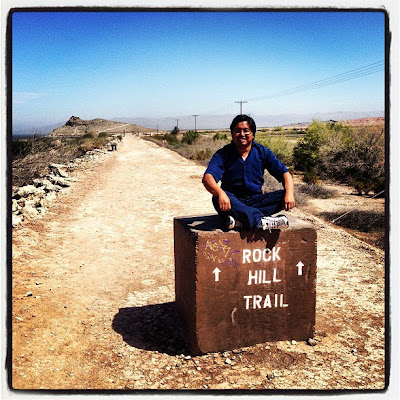 One hit wonder?  Or someone who made a difference?

Posted by Rohrerbot at 1:55 PM