The Cost of a Lifebird

Today's post was inspired from a thought on my way home from a major birding trek.  Just how much money am I shelling out for this birding addiction of mine?  Then I began to think about how much it costs to find a new bird each time I see one.   This post hits me at a time of burn out.  I have so much going on right now that I am fighting the impulse to bird. Really since January, I've been going, going, going.  It's almost like a target practice.  Locate the place and bird until your eyes can't see anything.
And then the worst thing happened.  I was so lost in my ID work on sea birds while I was in California that I forgot about a major get together with a friend who had spent a lot of money on us to attend this wine and cheese social.  But because I was so lost in my work, I only realized what had happened after the event!  A personal cost.  That was terrible.  I never forget anything, but I did apparently suffer some brain loss. So I have to make that up to my dear friend.
The safety factor. While spying on a really cool lifebird, a group of homeless people along the Colorado River were fighting. Luckily I was with another person but it made me angry.  No one messes with the lifebird.  Had they approached me, I would have clocked them a good one.  There is an internal drive that I can't explain.  I want to know more.  I want to see more.  I want to know, film, and experience life through the birds.  We purchased a 35 dollar a night hotel room for two days in Yuma. 70 dollars.  Never in my life would I have thought about staying in this city, but add the Colorado River with birds and we're there in a heart beat. In fact, the birds made Yuma look much better:) And the farmer's fields are HOT right now with migration!  Then food, gas, and DRIVING to the destinations!  One weekend cost 250 dollars.  And that was cheap.  I gained about 10 new lifebirds.  Breakdown.  25 dollars a bird.  Don't forget the park passes! Or the entrance fees into parks that don't acknowledge park passes:)
At first, it seems easy.  Birding is free!!!  You can bird anywhere you want.  But isn't that the trap?  You begin to see one bird and then you want to see another.....and another.....and before you know it, you're as some say, "In deep".  While this may be true for this year, it won't be for next.  My primary goal is centered around lifebirds from around the world.  It just so happens that Arizona has quite a chunk of North American birds here with quite a few exotics from Mexico, Central and South America. As one birder doing a Big Year told me about 2 weeks ago, "You live in a great state.  Lucky you."  Everyone doing a Big Year has to, at some point, come to Arizona.  It has been fun meeting the Big Year people while on my treks.
I reached a point last week during a search for the Lesser Yellowlegs in Tucson. I said to myself, "Enough is enough!"  I stood for an hour staring at the recharge basins in Sweetwater after work. I eventually saw one of the two birds reported there but being the photographer that I am, I was not satisfied with the views.  Did I see the Lesser Yellowlegs?  Yes.  Did I see the Blue-throated Hummingbird the weekend before?  Yes.  But it was quick.  For many of the birders with me, they were satisfied with the observations and checked it off their list. It was only their first time seeing the bird!!!  And it's a glorious bird!  For me, it has to be more than that......to say you saw a bird for 5 seconds isn't really "seeing" a bird.  Luckily I have observed the Blue-throated Hummingbird many times before.  If you're curious, you can check here or here. 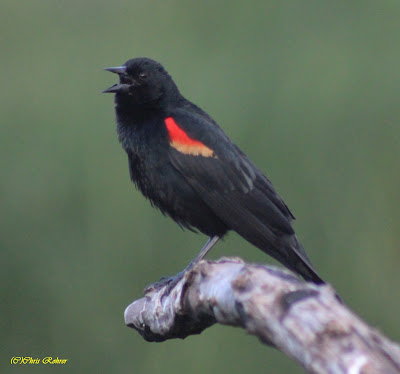 But then some birds brought me back to the basics.  The Red-wing Blackbird and the Common Yellowthroat called out during my search for the Lesser Yellowlegs.  They said, "Here I am!!!  Look at me!"  Well they didn't say that necessarily, but it was a wake up call.  While some say I'm in deep, there are several others in deeper.  There is definitely a chase going on.  I don't know if it was like this last year. But it's certainly hot this year.  On a daily basis, people are adding new birds to their lists.  With my school finals coming up, a trip to Guatemala, a nerd fest at Phoenix Comicon, weddings, etc etc........well my plate is full.  Now I'm still in the race, but toning it down a little.  Afterall, it's about enjoying the birds.  No more forgetting personal obligations! I think the worst part is that I've converted my other half into birding.  Pat purchased a great camera and is liking the competition part.  PLUS, those little birding couple trips we take have been a lot of fun as we throw ourselves into an experience full of people, culture and BIRDS! Pat's spark bird?  The Burrowing Owl.  More on that later.  Birding is serious business.  But so is my sanity and my checkbook.  If I'm not careful, we'll be living out of a tent:)  Now that actually might be fun.......:)

Posted by Rohrerbot at 9:18 AM