Texan Issues in the Garden 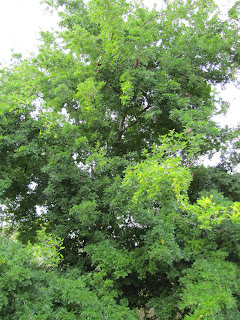 A while back, I posted something on Texas Root Rot killing my beautiful Chinese Elm over a year ago.  During my research, I found several suitable replacement trees for that area that were resistant to root rot. If you have had Texas Root Rot, you know that you cannot plant any trees that are susceptible to this disease again in that area.  It's just a natural fact here in Arizona that the fungus lives.  It's not everywhere, but it exists.  I've met a lot of people that have had this happen.  The tree will be beautiful one moment and in the next, the leaves will be dried and curled....they won't fall....they'll just hang on the tree.  At this point, the tree has suffocated and died.  The good news is that there are plants that will grow in these spots that have Texas Root Rot....and one of them is the Texas Ebony tree.  How appropriate!  Texas Ebony for Texas Root Rot:)  The elm was green and beautiful and it crushed me when she died. But from my research, I found that Texas Ebony, which is underused here in Tucson, was a perfect fit for that very green spot in my garden. Two cons about the plants....it's slow growing and it is thorny.  The pros are that it is so green and xeric that it's just plain ol' surprising that it can grow in the dry hot desert.....but it does.  It's from the legume family which means that it will add nitrogen back into the soil and that is a good thing for your other plants. Two plants I recommend for xeric gardeners, from Texas of course:), are the mountain laurel and texan ebony. 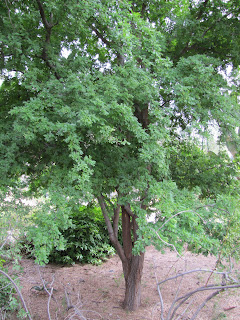 For more information on Texas Root Rot and suggested plants for these infected areas click on the link below for more information....
http://aggie-horticulture.tamu.edu/archives/parsons/publications/cottonrootrot/cotton.html
Cotton root rot, caused by the fungus Phymatotrichum omnivorum, also is known by several other names such as Phymatotrichum root rot, Texas root rot and Ozonium root rot. It is one of the most destructive plant diseases and attacks more than 2,000 species. However, either the fungus infects but does not kill monocotyledonous plants (grasses, etc.), or these plants are all highly resistant. In Texas (and Arizona), the disease is economically important in cotton, alfalfa, ornamental plants, and fruit, nut and shade trees. The fungus is prevalent in calcareous clay loam soils with a pH range of 7.0 to 8.5 and in areas with high summer temperatures. Therefore, the disease is limited to the southwestern United States.
Phymatotrichum root rot has been reported in Texas counties from the Red River to the Rio Grande and from Tom Green County to the Neches River.
Disease Symptoms
Disease symptoms are most likely to occur from June through September when soil temperatures reach 28oC (82oF). The first symptoms are slight yellowing or bronzing of leaves followed by wilting. Plants die suddenly after the first symptoms of wilting. Leaves remain firmly attached to the plant. Affected plants die suddenly, often after excellent growth. Large trees and shrubs may die more slowly.

Usually roots are invaded extensively by the fungus by the time plants have wilted. When roots are pulled from the soil, root bark is decayed and brownish, and wooly strands of the fungus frequently are apparent on the root surface. Affected plants pull from the soil with little effort.
Under moist conditions, sporemats sometimes appear on the soil surface. These mats, 2 to 16 inches in diameter, are first snow-white and cottony and later tan and powdery. On large roots and tubers, there are numerous small, cushion-like sclerotia or resting bodies about the size of a pinhead. At first they are light tan but later appear dark and warty.
The fungus generally invades new areas by continually slow growth through the soil from plant to plant. Occasionally, it spreads more rapidly on the roots of infected transplanted plants. The fungus can survive in the soil for many years, and often it is found as deep in the soil as roots penetrate. Affected areas often appear as circular areas of dead plants in fields of infected crops. These areas gradually enlarge in subsequent years as the fungus grows through the soil from plant to plant. Infested areas as may increase 5 to 30 feet per year.
Hyphae and strands. The fungus produces root-like strands (rhizomorphs) that grow through the soil until they contact the descending plant roots. Strands surround a root and grow toward the soil surface. Immediately below the surface, the fungus proliferates around the hypocotyl, producing a cottony, mycelial growth. Below this mycelium, the bark is destroyed, and the fungus fills the vascular tissue of the plant. Following death of the plant, sclerotia form in the strands
Plant barriers. This technique consists of planting resistant species around an infected area. These barriers either exclude or limit the spread of the pathogen. This technique assumes that the barrier plant does not harbor the pathogen in its root system. Make ornamental plantings of cotton root rot-susceptible species with isolated plants or groups of plants rather than in continuous rows as hedges. When the disease occurs in an ornamental planting, replace diseased plants with resistant species.
Fertilizer applications. To reduce root rot, apply fertilizers high in certain nitrogen forms. When nitrogen is applied as ammonia in a manner to fumigate as much soil as possible, research shows a reduced incidence of root rot.
In some cases, valuable ornamental plants and orchard trees have been treated successfully even after root rot infection has taken place. First prune the tree (or shrub) back and build a circular ridge (equal in diameter to the top of the plant) of soil some distance from the trunk. Work 1 pound of ammonium sulfate into the soil for each 100 square feet of surface within this ridge. Fill the area within the ridge with water to a depth of about 4 inches. Repeat the treatment and watering after 5 to 10 days. Do not apply more than two treatments in the same season. Following this treatment, water frequently to prevent drought injury. Acidifying the soil with sulfur around susceptible trees or shrubs may help delay or prevent root rot infection in areas where the disease is prevalent.
Resistant varieties. Development of resistant plants using conventional breeding concepts, has been difficult due to the pathogen's wide host range. However, the following list of woody and herbaceous plants has shown resistance or tolerance to cotton root rot and should be considered by the homeowner where the disease is prevalent. The hardiness zone is given for each woody plant listed. Check the map to determine the zone in which you wish to use the plant. Use any plant with that zone number or a lower number. Plants with a higher zone number usually will not be hardy in that area. Check the list for size and foliage type to aid you in selecting the plants best suited for your particular purpose.
Posted by Rohrerbot at 6:13 PM