A Date to Remember

Tucson is great for palms....not all palms...just some.  Here is some info regarding a palm that does well here.

The date palm must have full sun. It cannot live in the shade. It will grow in all warm climates where the temperature rarely falls to 20°F (-6.67°C). When the palm is dormant, it can stand temperatures that low, but when in flower or fruit the mean temperature must be above 64°F (17.78°C). Commercial fruit production is possible only where there is a long, hot growing season with daily maximum temperatures of 90°F (32.22°C) and virtually no rain—less than 1/2 in (1.25 cm) in the ripening season. The date can tolerate long periods of drought though, for heavy bearing, it has a high water requirement. This is best supplied by periodic flooding from the rivers in North Africa and by subsurface water rather than by rain. 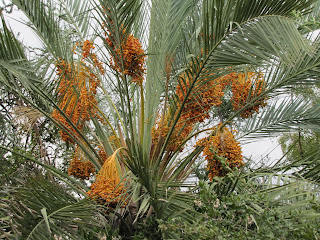 The date palm. Hanging from the tree are the infamous dates.

The date thrives in sand, sandy loam, clay and other heavy soils. It needs good drainage and aeration. It is remarkably tolerant of alkali. A moderate degree of salinity is not harmful but excessive salt will stunt growth and lower the quality of the fruit.

Date palms grow readily from seeds if the seeds and seedlings are kept constantly wet. But seedlings are variable and take 6 to 10 years to fruit. Furthermore, 50% of the seedlings may turn out to be males. The best and common means of propagation is by transplanting the suckers, or offshoots when they are 3 to 5 years old and weigh 40 to 75 lbs (18-34 kg). They are usually separated from the parent palm as needed, but in southern Algeria suckers are often put on sale standing in tubs of water. Some offshoots are maintained in nurseries until roots are formed, though most are set directly in the field after a seasoning period of 10 to 15 days just lying on the ground, in order to lose 12 to 15% of their moisture. In parts of Egypt subject to annual flooding, very large offshoots—up to 500lbs (226 kg) are planted to avoid water damage. In general, it is said that at least 2 offshoots can be taken from each palm annually for a period of 10 to 15 years. The potential of tissue culture for multiplication of date palms is being explored in Iraq, Saudi Arabia and in California. 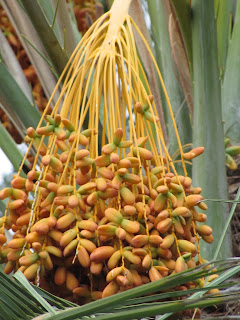 The date palm is believed to have originated in the lands around the Persian Gulf and in ancient times was especially abundant between the Nile and Euphrates rivers. Alphonse de Candolle claimed that it ranged in prehistoric times from Senegal to the basin of the Indus River in northern India, especially between latitudes 15 and 30. There is archeological evidence of cultivation in eastern Arabia in 4,000 B.C. It was much revered and regarded as a symbol of fertility, and depicted in bas relief and on coins. Literature devoted to its history and romance is voluminous. Nomads planted the date at oases in the deserts and Arabs introduced it into Spain. It has long been grown on the French Riviera, in southern Italy, Sicily and Greece, though the fruit does not reach perfection in these areas. Possibly it fares better in the Cape Verde Islands, for a program of date improvement was launched there in the late 1950's. Iraq has always led the world in date production. Presently, there are 22 million date palms in that country producing nearly 600,000 tons of dates annually. The Basra area is renowned for its cultivars of outstanding quality. The date has been traditionally a staple food in Algeria, Morocco, Tunisia, Egypt, the Sudan, Arabia and Iran. Blatter quotes the writer, Vogel, as stating: "When Abdel-Gelil besieged Suckna in 1824, he cut down no fewer than 43,000 trees, to compel the town to surrender; nevertheless, there are still at least 70,000 left." 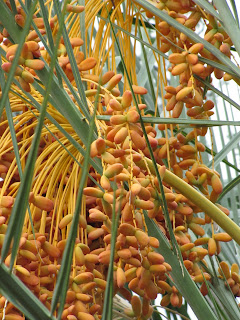 Grown here in Tucson at the Botanical Gardens

Spanish explorers introduced the date into Mexico, around Sonora and Sinaloa, and Baja California. The palms were only seedlings. Still, the fruits had great appeal and were being exported from Baja California in 1837. The first date palms in California were seedlings planted by Franciscan and Jesuit missionaries in 1769. Potted offshoots from Egypt reached California in 1890 and numerous other introductions have been made into that state and into the drier parts of southern Arizona around Tempe and Phoenix. In 1912, Paul and Wilson Popenoe purchased a total of 16,000 offshoots of selected cultivars in Algeria, eastern Arabia and Iraq and transported them to California for distribution by their father, F.O. Popenoe who was a leader in encouraging date culture in California. It became a profitable crop, especially in the Coachella Valley. There are now about a quarter of a million bearing trees in California and Arizona.

Posted by Rohrerbot at 6:31 PM

Email ThisBlogThis!Share to TwitterShare to FacebookShare to Pinterest
Labels: date palm, date palm Tucson, growing a date palm in Tucson, how to make dates, the history of the date palm