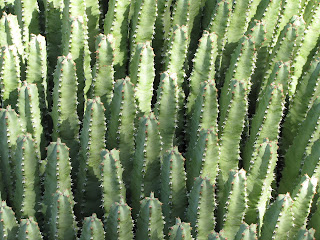 One of the things that I have been learning a lot about lately are the differences between Euphorbias and the Cacti Family.  I have been calling a lot of the Euphorbs "cacti" over the years and I am putting a stop to it this year.:)  So your question is....what's the difference?  Here's a response I found that clarifies.... 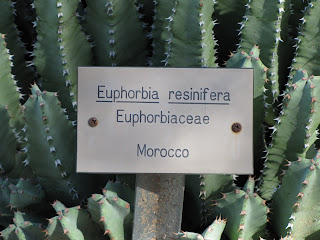 Area of science: Botany "Both the cactus family and euphorbia or spurge family are large diverse
families. Some main differences are that cacti usually have clear, watery sap
and many euphorbs have milky, sticky sap that is often toxic. Cactus spines
occur in clusters of more than two on an aerole, an extremely short shoot.
Euphorb spines are modified stipules and occur in pairs, and have no aeroles.
Flower structure also varies between the two families. The characteristic
euphorb inflorescence is termed a cyathium, which appears as one flower but is
several. Flowers lack petals. The female flower is elevated on a stalk and
surrounded by tiny male flowers each consisting of just an anther. The flowers
are then surrounded by cup-like leaves. In contrast to small flowers and
inflorescence of euphorbs, cactus flowers are usually large single flowers with
petals and many stamens. 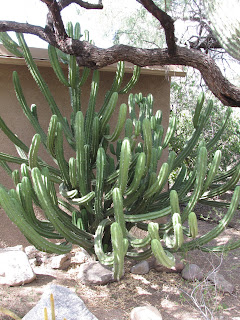 Cacti are native almost exlusively to dry areas of America while Euphorbia are
native throughout the world in both wet and dry areas. Cactus-like euphorbs are
found in Africa. The majority of cacti are succulents with fleshy stems adapted
for water storage and photosynthesis and leaves reduced to spines or needles.
Some euphorbs are succulents but many have broad leaves and are not succulent,
such as poinsettia (Euphorbia pulcherrima), castor bean (Ricinis communis), snow-on-the-mountain (Euphorbia marginata), rubber tree (Hevea brasiliensis)
and the houseplants croton (Codiaeum variegatum) and chenille plant (Acalypha
hispida). " 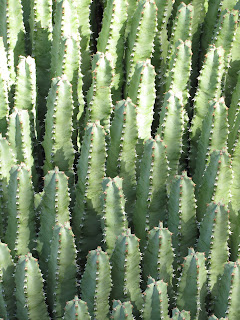 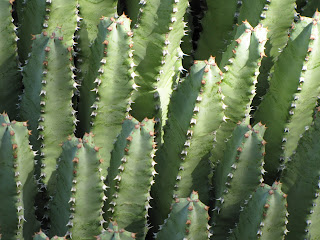 From my personal experience, I have also found that these guys like a little more water than their cacti siblings. Generally speaking, the Euphorbs a bit less spiky and have ridges with needles compared to the very spiny cactus.....look at our native Teddy Bear Cactus to compare....... 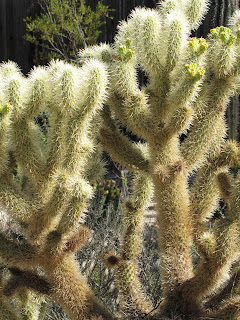 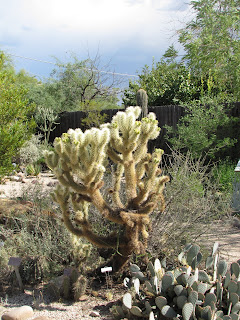 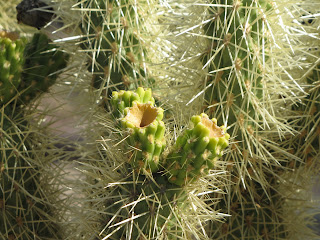 Do you see the differences?  Happy Gardening!!!!
Posted by Rohrerbot at 5:22 PM