A quick post today before school starts this week and then I won't have time to write.  I need to log a picture and info on the Bears Breeches for later comparison.

﻿ ﻿ The Pakistan Mulberry is the biggest surprise this year as it has doubled in size since I put it in the ground in June.  It is legal here because it produces fruit otherwise the city of Tucson has banned non fruiting mulberries due to their heavy pollination and high allergy rate in spring. 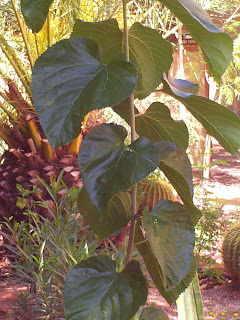 Finally a follow up on the Bears Breeches or Acanthus Mollis.  My first blog was about an attempt to grow Gunnera....and that was a laughable attempt.  "Some would say I'm a dreamer....." It didn't grow AT ALL from seed and I watered and did everything I was told....but the simple fact is that I live in Tucson.  So I found Bears Breeches because I like the leaf structure and it has that rubarb feel like gunnera did.  I put it in too much shade and almost killed it....so I pulled it from the planter and the leaves all died, but I was told the root system is vigourous so I left it in the pot and voila!!!, if a leaf hasn't shot up from the ground....so I am happy about that as I don't want to spend money on something again if it can be saved. I have a special spot for recovery plants behind the shed...no one can see them and it gives them a second chance in my make shift plant "hospital":)  I also went to Mesquite Valley Growers today after our awesome rain event last night and was overwhelmed with so many choices...so I left and will come back when I have money:) Happy Gardening!
Posted by Rohrerbot at 11:33 AM