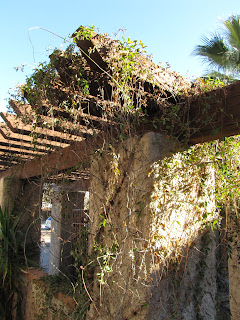 I understand it happens, but I don't like it.  This weather pattern hasn't happened for awhile and I suppose we were spoiled with warmer winters over these past several years.  Plants did very well.  While midtown Tucson has higher temps than other parts of the city, it still suffered a nasty freeze last night that got into the teens.  The cacti damage is phenomenal.  Colonies of nopal (or a variety of prickly pear) just collapsed onto the sidewalk.  A neighbor walked over to my door last night and asked, "Did you see the cactus all over the sidewalk?"  I sure did.  In addition to that situation, the tropicals in two large pots died.  Several birds of paradise bit the dust.  While I have covered all the citrus, I haven't lifted the sheets to see the extent of the damage....and I'm sure there's some there. The scariest part of the freeze for me is my love affair with the mighty Jacaranda. It is the one thing that I hope springs back to life in March. It's normal for the ferns to dry up and fall off this time of year, but this 3 year old beauty has never seen a freeze like this.  Of all things, I cross my fingers for this tree.  It is a similiar reaction I had with a Chinese Elm a couple years back that collapsed due to Texas Cotton Rot. 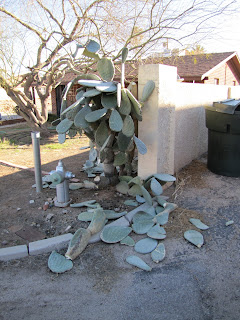 I suppose in a way, this freeze teaches us as gardeners to plant native species in our yards.  But even the native species had a hard time keeping up in the landscape.  Is this about failure? No.  It's about the constant redefinition of our garden spaces.  As people, we like to form routines and get into those routines.  I planned to work on Spring Projects.....not fear for already established plants that cost money and redo an area!  If it's one thing I try to remember, it's this.  While the top of the plant is fried, it doesn't mean the root system was.  When March comes....March 15th to be exact, it will be the start of Spring and most things can be trimmed at that time.  Trim trim trim and watch how everything grows grows grows.  So hope is not lost......it's just our guts reacting to this terrible winter event in the US.  And you people who love it.....enjoy it while it lasts:) 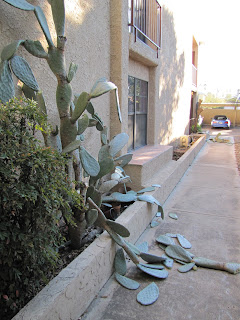 Except those who've had pipe damage in Tucson.  This freeze event has shut down schools today because plumbing is all jammed up with ice. In fact, a lot of places are closed down today.  It's weird because in Wisconsin, this freeze wouldn't even be an issue.....partly because my hobbit friends and family are built from a sturdier build.  Living in the desert after awhile makes you develop a "thinner skin":)  Going back home in winter can be a cultural shock at times:)  Anyhow, last night we opened all the pipe valves for water to leave.  However, a resident must have seen the water and shut one of them off!!!  So it is frozen solid.    All other pipes were in good shape this morning when I went outside to look them over. 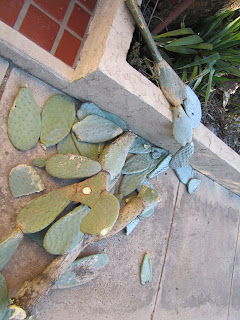 As for failures.  A bunch of bloggers have been talking about keeping a journal of what desert and non native desert plants collapse at certain temperatures. With the temperature sustained at 18 degrees last night for several hours, it is surprising to see that the oleanders have held up.  The live oaks seem unaffected.  The palm tree looks fine.  The Heavenly Bamboo(Nandina) is holding up.  A Cereus and Silver Hair Cactus survived.  Roses....what?  There was a freeze?:)  Texas Ebony looks wonderful.  One colony of bamboo collapsed; the rest look healthy. 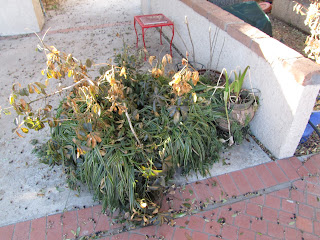 That which suffers.  The prickly pear.  Bouganvillea.  Birds of Paradise.  Any tropical such as the Scheflerra or Spider Plant.....all collapsed. Castor plant gone.  But the seeds....collected:) 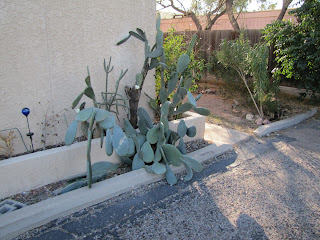 That which is unknown.  Citrus. Loquat. Guava. Ficus. Jacaranda. These are the "line plants" that can grow here because Tucson is listed as subtropical.  But the "line plants" can die from the frost.  I'm not sure what the official word is for this because my brain is frozen.....but there is a word. Citrus is hardier than the rest of these trees listed. Again it's about placement. 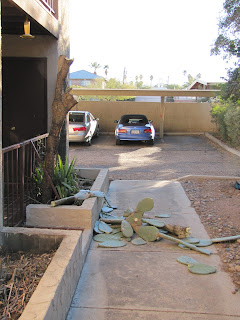 That which benefits.  All fruit trees....they certainly have gotten their chill hours this winter:) And.....you. A freeze allows us to re-examine a garden space and put something different in its' spot.  It also allows us to clean up the plants in Spring where before the plant looked super healthy and you didn't want to touch it.  Bushes need pruning.  While the bouganvillea, looks atrocious; don't touch it.  Wait until March 15th or until freeze warnings have been lifted before trimming your plants.  The "dead" branches and leaves protect the core part of the plant from total collapse. 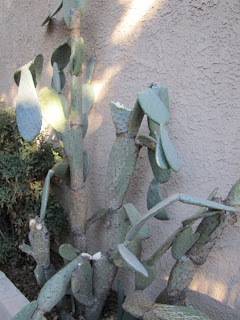 Finally, failure doesn't define the end but rather an opportunity to explore other venues. While it's heart breaking, it's also a learning opportunity for gardeners to reconstruct their gardens in Spring.  The reason why we hurt when this happens is because we've personally nurtured and worked with these plants...in some cases for years! And all it took was 1 night or several nights to undo all the love and devotion you gave your babies. (This last line sounds like a bad love affair.:)  I know that this sounds strange, but everyone feels this.  There is an attachment or bond that we form with not only our plants, but our children, pets, etc.     Well, if you are a Vulcan type person reading this blog that doesn't have emotions, it's then about the investment of time lost. But because you're logical, you'll be able to move on faster after a devastating event like this:) Your scientific knowledge will allow you to explore more logical native species in your landscape.  Until next time, live long and prosper.....in the garden:)
PS.  The word, thanks to Antigonum Cajan, was endemic.:)
Posted by Rohrerbot at 10:34 AM