Just how many black birds are out there??!!!!  Well on this day with Kathie, we'd discover every type of black bird and then some at Lakeside Park!!!!  There were some incredible surprises in the mix as well....rarities.  I love my birding buddy.  She's not only a cool person, but I now miss her when I'm birding alone.  Birding anytime is great but it's better when we work together as today would prove.
And of course there were those that stood out from the "black feathers" only club.  But Kathie's careful eye discovered Cowbirds!!!  She was in awe and when it's something big, she says things like, "Oh my gosh Chris.  Oh my gosh! That's a...."  And we both get excited over the discovery.
First, she documents and by the time she gets that camera ready, they've taken off on her. Birds are fast so I usually snap the shot and ID later.
Now to be honest, blackbirds or sparrows scare me and can be difficult to ID. Or maybe it's just in my mind.  But they are birds and they are cool.  I just don't know why I feel that way because the blackbirds are incredibly interesting behavior wise.
But inevitably, my eye is attracted to the raptor sitting in the tree.  I'm fascinated by them. Or how the above Coots gathered in a big group to have breakfast.
But something captured both Kathie and my eyes.  Yellow.  WTH?!  There were two yellow headed blackbirds on the grass!  If you've ever tried taking shots of these birds, you know how difficult it is to get them on camera as they like to hang out in the reeds around water areas.  But here out in the open, there were TWO Yellow Headed Blackbirds.  And these birds do grab my attention and it was one of the many personal thrills for this day. The Vermilion Flycatchers and Herons being the other exciting finds... 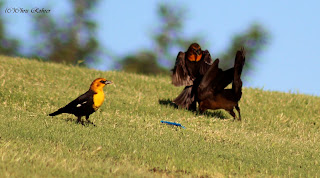 But this sequence here of shennagins really got me excited and was thrilling to get on the camera. 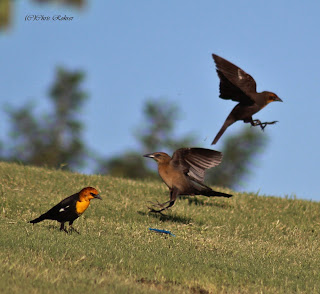 Like hummingbirds, there was a pecking order and someone crossed the line......it was the female Grackle. 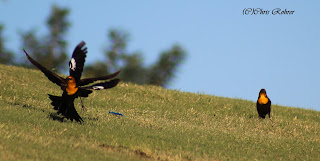 What a ^%&#!  She had to get her bill into the fold but thankfully the two young ones stood their ground......until 2 Kestrels presented themselves up in the airwaves and then all hell broke loose.  Everyone and their mother goose got up and flew the coup! 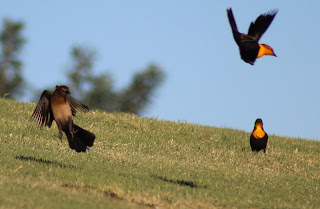 Well except for this cute adorable little White Crowned Sparrow.  They're back!
The shot below of the Cowbirds REALLY got Kathie jumping up and down.  Luckily I was able to capture the two together.  It's important to note that they are two completely different Cowbirds hanging out on the same branch.   The trees were full of Brewer's, Grackles, etc etc.  And these two were cleverly disguised in the mix. And while the Bronzed Cowbird wasn't a lifer for me, the Brown Headed Cowbird was.  It was an unusual find in Tucson.  I saw my first Cowbird in Madera Canyon.
Kathie told me that this would happen.  She said that many times there are different birds hiding in the mix.  But my eyes were pulled to the Vermilion Flycatchers, Egrets, Herons, Raptors, Hummingbirds, etc etc. 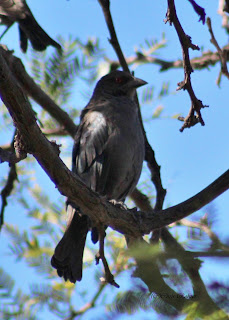 And lately the Warblers have grabbed my full attention.  Coming up, I'll present several from my Portal visit. It was a fun day, as always, with Kathie.  But most importantly, I learned the very important lesson of looking closer.  Not everything is as it appears.  And then I joined the Dark Side of the force:) And it's appropriate.  Kathie would be the Emperor and I would play her henchman Darth Vader.  That Yellow Rumped Warbler never had a chance:)  More tomorrow.....