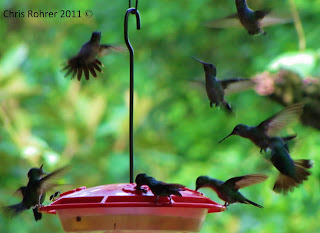 Off the infamous Pipeline Road in Gamboa, Panama, we went to the Panama Rainforest Discovery Center.  It was a hike into some of the most beautiful rain forest of Panama.  It was also last year that I would be converted into a birder.  The nice thing about a blog is that you can review your notes and journals from the past.  And I have to admit that since our trip there, a lot has changed for me.  I feel smarter about wildlife and especially about birds.  As I was working on the Chuparosa challenge, I came upon a website that reminded me about another aspect of hummingbirds.  We have 17 species in North America.  But did you know that we really have over 356 species in the Americas!!!?? 51 of which are endangered.  And most of them are found in Central and South America.
Then I remembered that I had all of these photos from Panama.  I didn't know much about hummingbirds at the time.  And my older camera was difficult to use.  I started discovering limitations on photography.  A couple months later, I'd have a professional camera to capture my shots.  But looking back at these pictures, I'd had to say that they aren't bad at all.  However, I took more shots with that older camera than I would have with my current one just to get that "one shot". 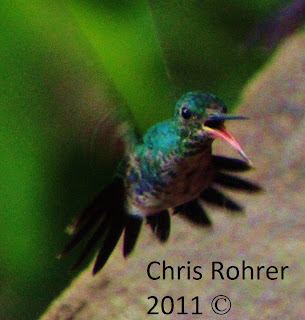 There are some amazing hummingbirds that truly stand out from the rest in this incredibly beautiful bird family.  So I thought I'd challenge myself and identify the ones I caught on camera.
Some hummingbirds have massive bills like the Sword Billed Hummingbird.  I am not joking when I say their bills are almost longer than the length of their body.  And some have tails that are very elegant and loooong.  I've seen this particular one flying around....it looked like something out of a disney movie. It's called the Booted Racket Tail.  Most of these exotic species are found in Ecuador.  I have yet to go there so when I do, you all know what I'll be doing:)  We were in the Amazon of Peru where I had the chance to observe lots of monkeys and birds....and my infamous Jaguar sighting:) 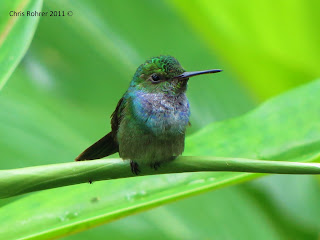 Some hummingbirds have a mohawk like the Frilled Coquette. About 10 seconds into the video, you'll have a better look.
The fact is that there are so many kinds of hummingbirds that it is probably one of the most challenging jobs out there for a person to have.  I've spoken about the id'ing of females in this group as well as distinguishing the minor differences between species......like the Ruby Throated and Broad Billed Hummingbirds.  It can all be very tricky. And I'm sure there are still species out there that haven't been identified yet in the last remaining untouched areas of the Amazona.