And then there were cranes.  To be honest, I didn't know much about them except for the Sandhill Cranes which number in the thousands or millions.  Then a sobering reality check.  Most cranes are endangered or nearly extinct because of hunting, habitat loss in wetland areas, or poaching.  This then changed the nature of the visit from "Look at those pretty cranes" to "Listen up!"  But before I begin, I have to tell you, I love these shots today.  In fact, I'm excited to share them with you all.  The photography shoot made me smile.....maybe because the subjects and theme were so fascinating:)   Okay so let's begin with this enlightening tour led by our guide..... the beautiful Bridget.  Although you'll have to imagine her as I didn't take a pic:)  Let's get started with the following crane below.....the Whooping Crane of Wisconsin and North America.
This bird was nearly hunted to extinction back in 1941.  It is only two cranes found in North America besides the Sandhill Crane.  The Sandhill populations are growing in size as they are adapting to different environments.  Now this Whooping crane story nearly had a tragic ending with only 22 birds left in 1941!   I was shocked and saddened by all of this.  It parallels many stories like that of the California Condor in the Grand Canyon. 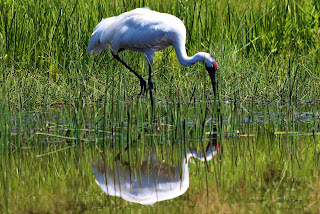 I don't know how they did it, but this species of crane today exists because of some very dedicated people who believed that they could be saved.   And it hasn't been an easy road for this crane but it is a success story we don't often hear about on the news.  The Whooping Crane is still very much endangered but the population is on the rise again.  As of 2011, there are an estimated 437 birds in the wild and more than 165 in captivity.
The above pic is not my own but I had to show you the effort and time it has taken to train these birds how to migrate back and forth since they didn't have parents to imprint.  Look closely at this pic and you'll notice the pilot is in white.  Humans MUST dress up in a Whooping Crane outfit and feed the chicks this way or they won't be able to survive out in the wild.  And last year it was a rough one.  Each crane chick costs around 100,000 dollars to help put back into the wild.  So when hurricanes and tornadoes hit the Florida coast, where a group of these birds migrate, it hit the researchers hard.  18 cranes were released into the wild.  The storms killed 17.  One survived briefly and then soon after died.
And then there is the poaching.  5 Whooping Cranes were killed because people think it's fun to kill animals. Check this case out. Wade Bennett, 18, of Cayuga, Indiana and an unnamed juvenile pled guilty to killing First Mom(first captured crane to have successfully bred in the wild). After killing the crane, the juvenile had posed holding up its body. Bennett and the juvenile were sentenced to a $1 fine, probation, and court fees of about $500, a penalty which was denounced by various conservation organizations as being too light. The prosecuting attorney has estimated that the cost of raising and introducing to the wild one Whooping Crane could be as much as $100,000. Source  Unbelievable. 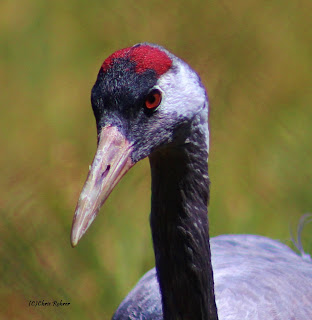 In Wisconsin, Necedah National Wildlife Refuge has done a great job in helping out with this crane.  They are beginning to nest and migrate again and this is good news for this crane species.  The Asian and African continents have their own issues.  Farming is obviously important to all of us and the cranes love to eat seed.  Farmers don't like this and shoot the cranes.  Cranes have been on the losing side of this battle for years now, but again there is a solution and.....it's working!  But it takes time and education.  A natural occurring substance known as Anthraquinone is put over the seed which the cranes do not like.  Cranes detect AQ at very low levels and avoid it. So farmers around the US and the world are using this coating liquid/powder with success. 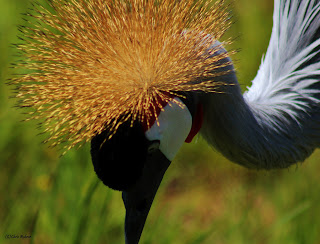 But the bigger topic was Wetland loss.  Wetlands are the key to the success of many cranes.  Dam construction/water use has affected many of the cranes habitat.  The solution here is to preserve the habitat, but in many countries this is not regulated resulting in the continual decline of the crane.   I'll show you several areas around my hometown that have successfully preserved the wetland areas around our rivers and Lake Michigan. 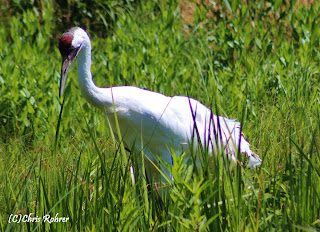 And then there is poaching.  As you can see, several of these cranes are desired for their feathers.  Several have cultural taboos that protect them.  In one country, eating a crane is bad luck. Or killing a crane will result in bad karma.  And in some Asian countries, cranes are considered good luck. 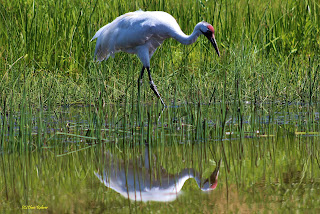 In Japan, for example, the Red-crowned crane is revered as a sign for monogamy in marriages.  Why?  Because this crane partners with only one other in its lifetime. In some parts of its range, it is known as a symbol of luck, longevity and fidelity. Now the story behind this particular crane is interesting. The Red-crowned crane is also very much endangered.  It migrates between China, Korea and Japan.  Japan is okay as they are revered.  And in Korea, this bird is surprisingly safe.  Why?  Because they migrate between the borders of South and North Korea.  It is said that this bird could be the symbol someday that unites the countries again.  In China, the bird is also revered but there is habitat loss with China's expanding economy and population.
I'm really glad we ran into the International Crane Foundation in Baraboo.  Of course, they are located in different areas.....maybe one is in your area.  Here's the website that will lead you to lots more info.  For me, it was extremely educational and makes me appreciate the Sandhill cranes even more.  I wish I could share with you the sight of 40000 cranes descending all at once.  Perhaps one day the Whooping crane will number in the thousands again.
If I haven't responded to your blogs, it's because I randomly escaped to Mt. Lemmon for the weekend.  With the onslaught of summer school and a bad case of being locked up inside from the heat, I needed to just up and leave. I need my hikes and photography....and it really hasn't happened since this Wisconsin trip:( More tomorrow..... 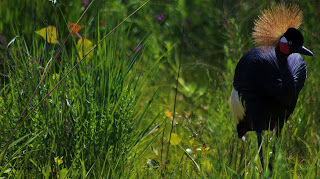