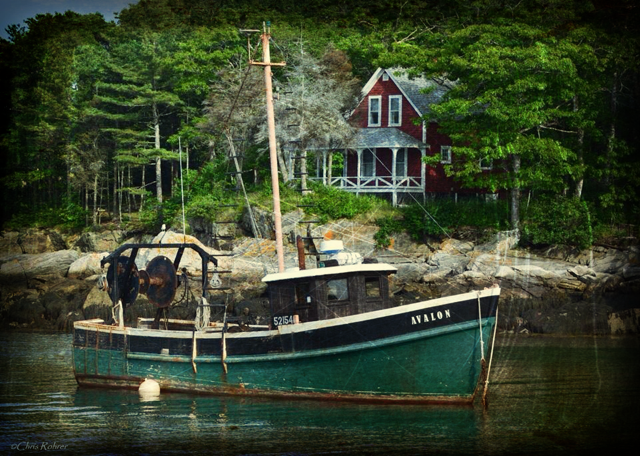 The scenic view from the harbor and the allure of seafood captured our attention. 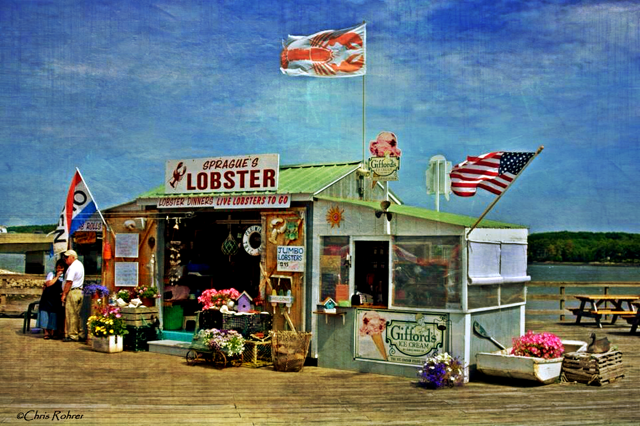 It was a special day. We were going to find the Atlantic Puffin and visit one of their nesting grounds on Eastern Egg Island! 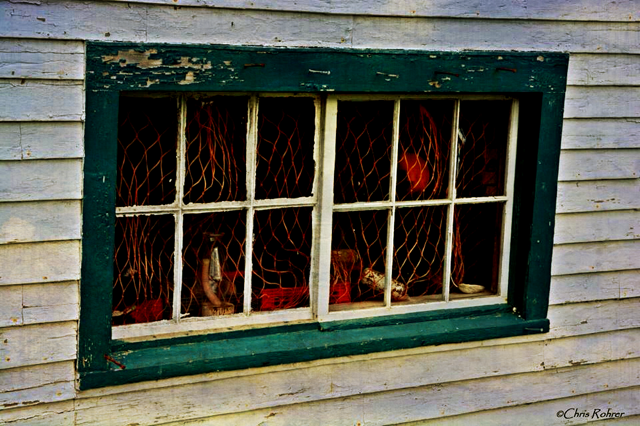 The morning began with a bit of a breeze.  As the day went on, the breeze became something stronger. 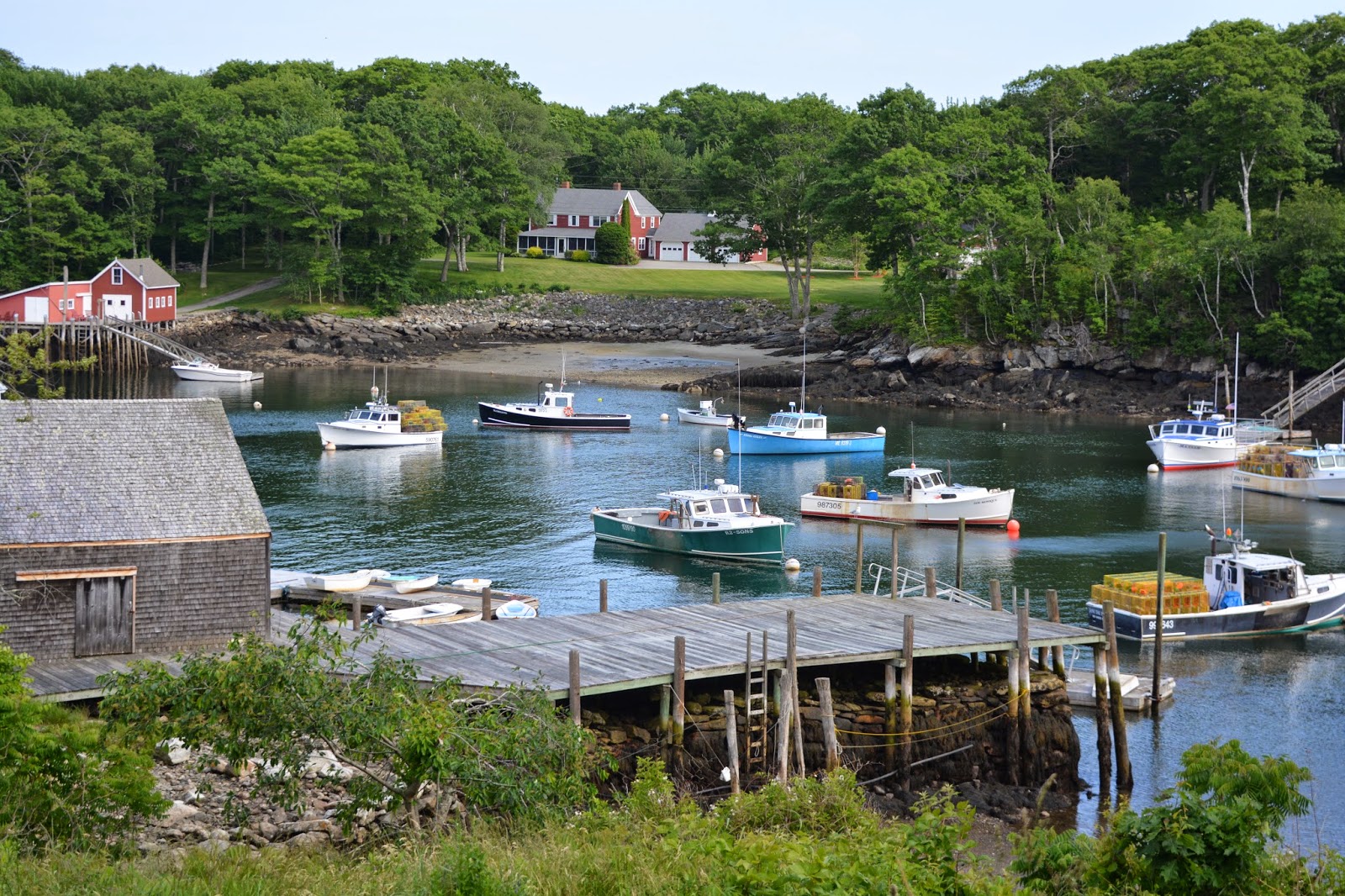 Gulls, like the Great black-backed gull, soared and swirled above our heads. 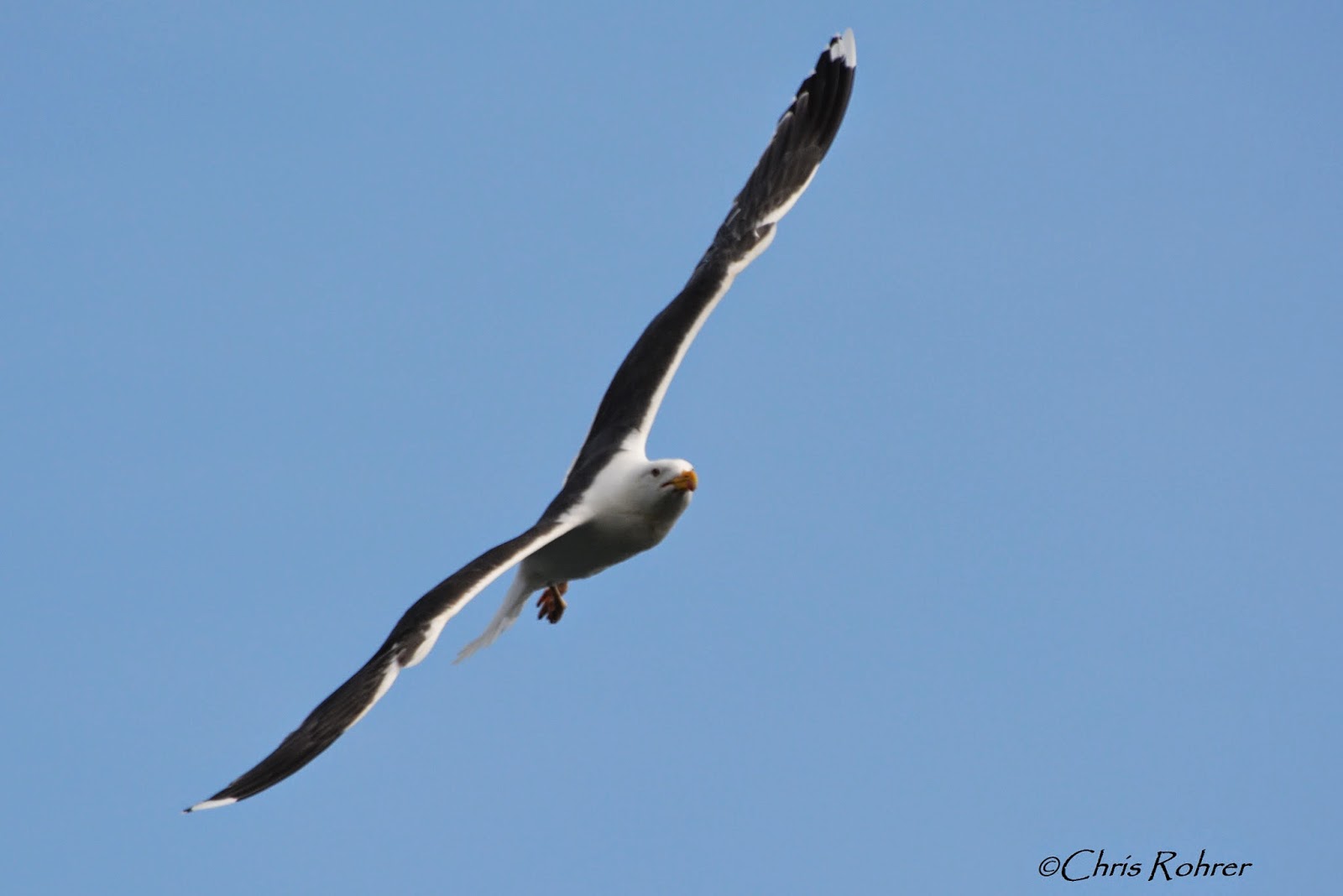 We boarded our vessel and began to leave dock.  By now the wind had become rather gusty.  The waves grew large as we left the harbor.


As we passed Common Eiders, passengers were warned of the rough conditions.  But we had come for the Atlantic Puffin.  It was a life bird for all of us.  There was no turning back.

The boat began to rock.  Waves began to splash the passengers.  Three boys on the bottom deck screamed with delight as each cold spray hit their faces.  The Audubon guide bravely stood his ground as the ship pitched and turned. Yet even after being pelted by shards of ice water, he kept going. The ship seesawed even more.  As we crept closer to the island, I began to see little white darts in the sky.  Terns!  And rare ones!  Several passengers became sick.  Others attempted to lock their bodies around rails.  This was going to be a challenge. 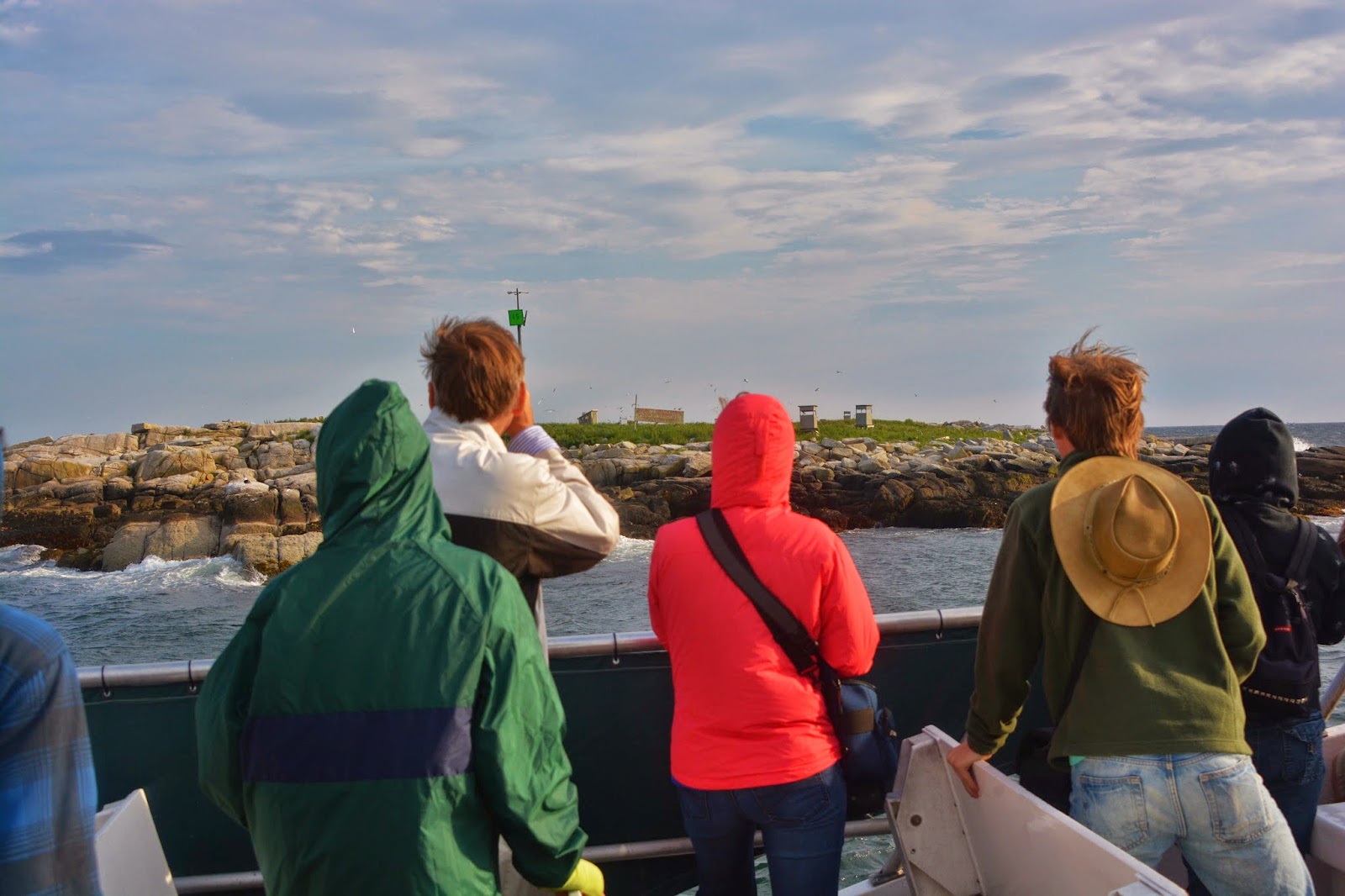 The vessel lurched forward throwing some passengers to the side rails. Someone screamed, "LOOK!  A PUFFIN!"  For a brief moment, the ship stopped moving long enough for everyone to observe the amazing Atlantic Puffin!

The Atlantic Puffin disappeared from the coast of Maine during the early part of the last century.  They were hunted for their eggs, meat and feathers. After years of work by Audubon, these birds have made a comeback to the coast of Maine where they now breed once again. 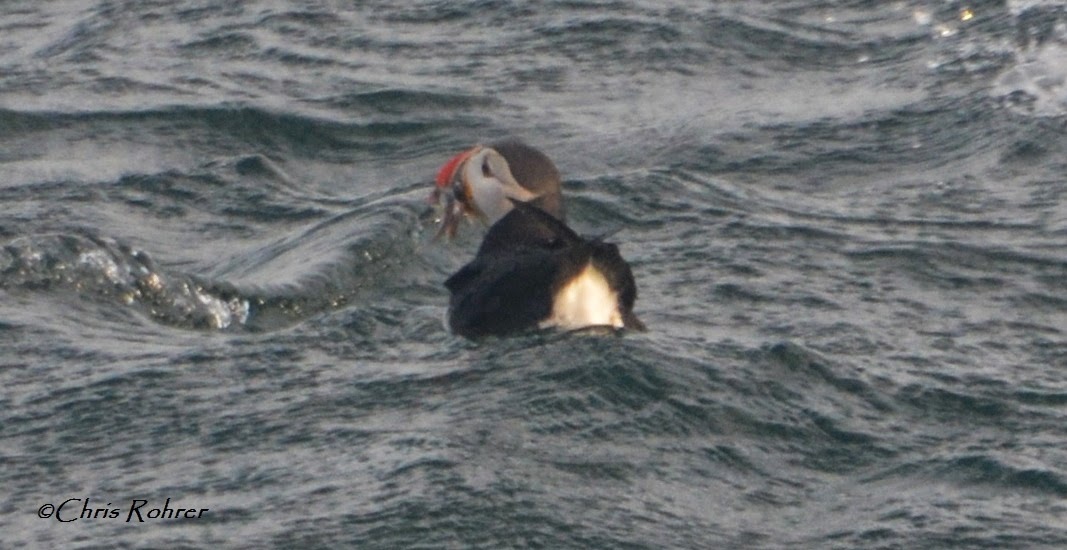 Everyone locked their binos and cameras on the birds.  Or at least tried.  Some had their heads in a bag.  Others clung to their loved ones.  Was it worth it? As we approached the island, I noticed my second target bird!  The Black Guillemot!!!  It was a thrill to see so many around the rocks! The vessel rolled and I was knocked over a bench. Ouch!  I CAN DO THIS!  CONCENTRATE!  FIND THEM!  OBSERVE THEM AS MUCH AS YOU CAN!  YOU'LL HAVE TIME TO COMPLAIN LATER ON! 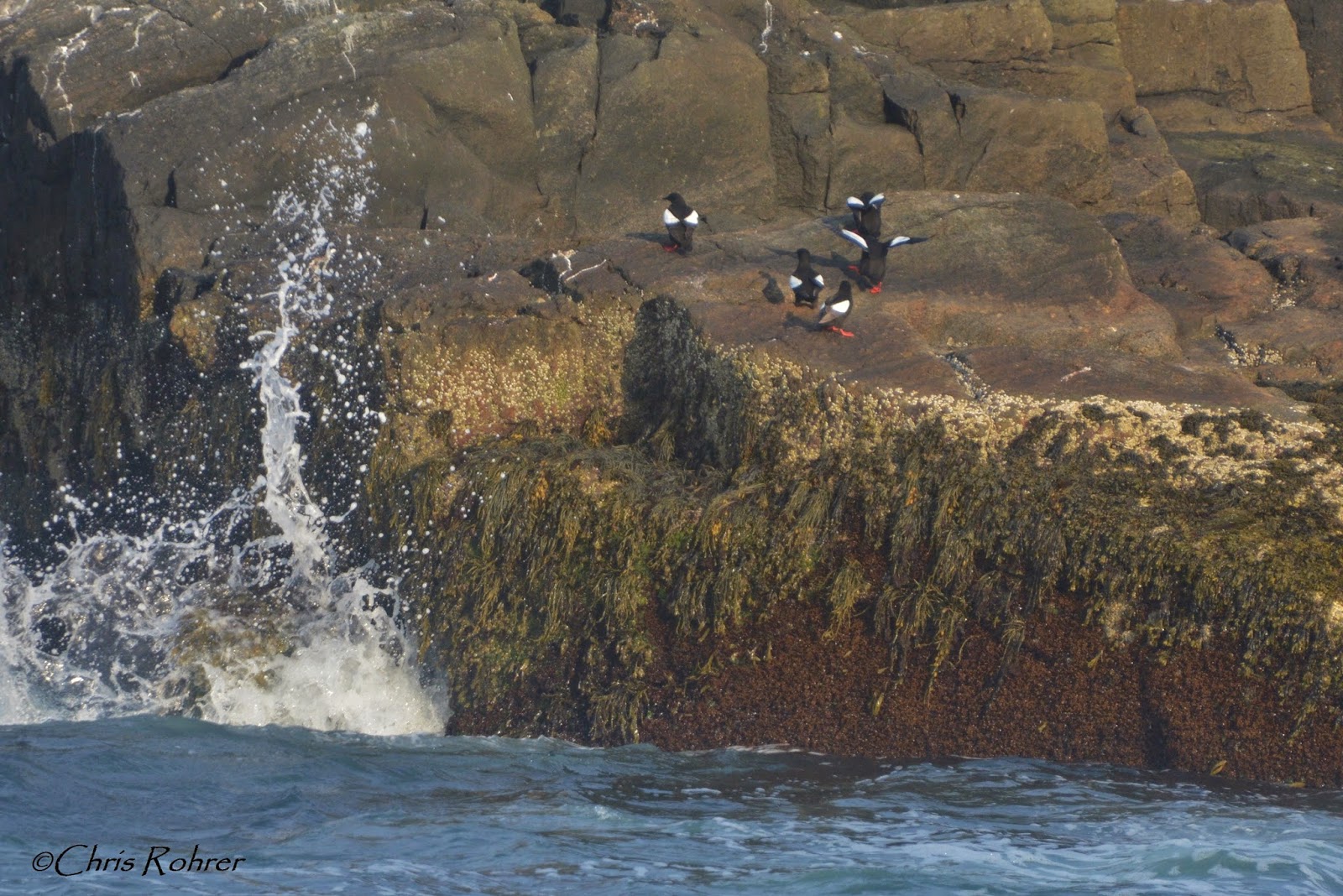 I tried to keep my shaking hands steady.  Focus you desert rat!  There will not be another opportunity to do this again!

And the Guillemot flew with what looked like a twizzler in its' beak!  Puffins were gathering small fish and eels as well.  I would stare, amazed, at the crazy things they were pulling out of the water. 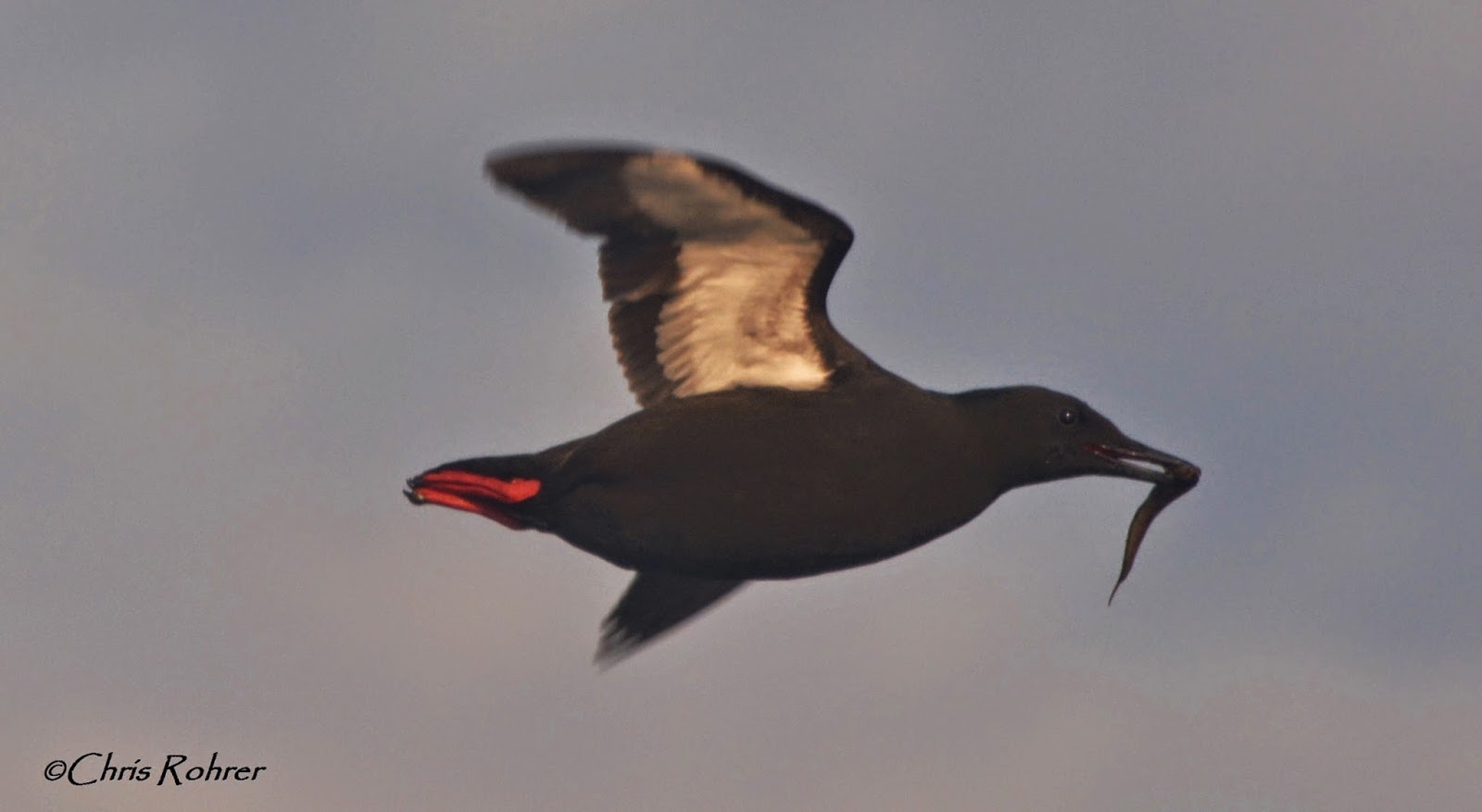 On shore, the "Hilton" was home to several human guardians.  They observed the nesting birds, collected data and protected the Puffin's breeding grounds. 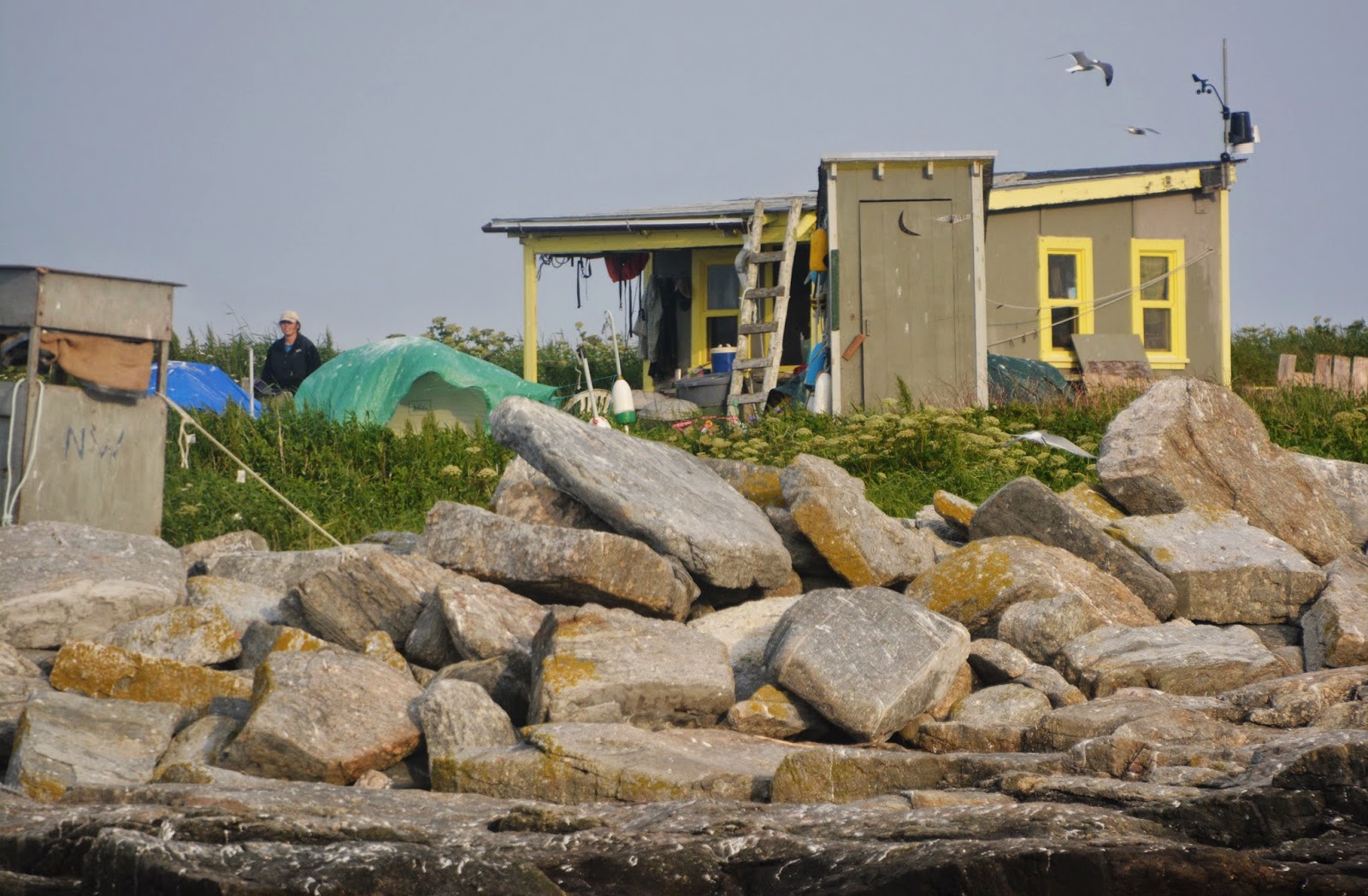 TERNS!  The true test for me began.  Not many people were interested in the terns twisting and gliding around our vessel at light speed.  I was.

Another sway and rooooooollllll!!!
Two terns would be life birds for me......IF I could ID them.  A lot of my energy went into finding the endangered Roseate Tern and Arctic Tern. There were a few scattered in between many Common Terns.  With the boat constantly pitching back and forth and the terns banking sharply around us, it was hard to focus visually.  As Obi-Wan told Luke in the first Star Wars movie....."Luke, let go.  Use the force."  I switched off my eyes and listened for the calls to hone in on their location.


And just like that, it was over.  It was one of the most satisfying experiences in my life.  I did it!  All target birds achieved with great observations.  However the aftermath wasn't pretty.  I'll let Kathie tell her story:) Both of my comrades fell ill during the voyage.  However, they survived the experience and won't forget their encounter with the Atlantic Puffin anytime soon. Some life birds can be painful. 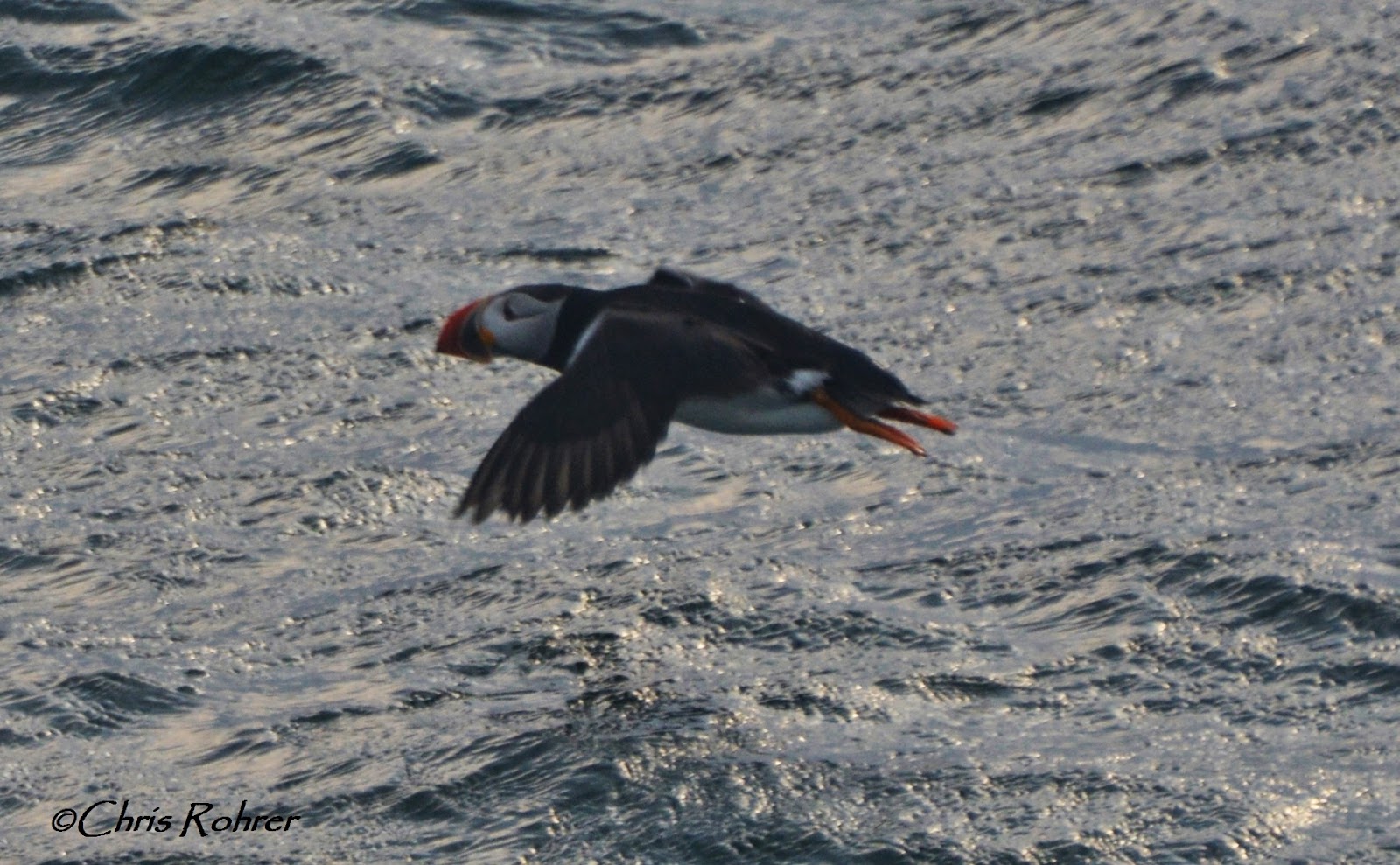 As the last Atlantic Puffin flew from my sight, I looked over the rough ocean waters and thought about how exciting this life of discovery is. 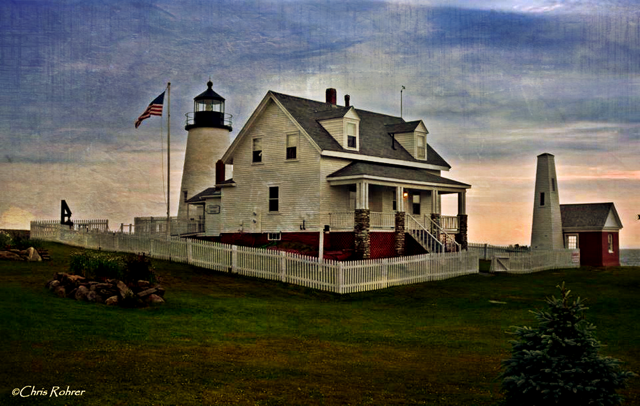 This is just the beginning of our Maine story.  There is still so much more to come.  As of this write, I have observed and discovered 432 birds this year in North America.  We began in California, scoured Arizona, got a taste of New Mexico, walked the beaches of Northern Mexico and explored Florida.  Life is truly a dream. For more about the Puffin tour, check out the Hardy Boat Cruises. And for more birds from around the world, check out Wild Bird Wednesday!
Posted by Rohrerbot at 9:17 AM