I've been trying to keep up with my birding, but it has been difficult.  Simply put, I can't.  Birds have been coming in left and right while I'm in the middle of a teaching lesson:) There are so many birds that I have to focus myself at times because it's overwhelming. What do I want?  Flycatchers? Warblers? Where should I go? Too many decisions!!! On a wonderful outing with Gordon Karre, Mark Ochs and Kathie Brown, we fled into the beautiful countryside of the Tonto National Forest. It was the perfect place to not have to make those decisions:)
It started off as a cold morning and then worked itself up into a hot afternoon.  We went from desert landscape into pine forest mountain tops.  It was a fantastic day full of cool finds and observations.
It was my first time meeting Gordon and Mark.  I love meeting birders.  I especially love watching the way they bird.  Gordon is very much like I am in that we search for target birds and try to get better shots and observations of birds we have already seen.  Kathie birds with a gentle heart and takes her time counting them all.  And Mark!  Why his style was the most interesting of us all!
He spoke in a dialect I recognized....Wisconsin!!!  Even though I lived in the Great Lakes region all of my childhood, I never learned to bird there. Something I hope to remedy in the future.  But I was constantly surrounded by people who loved the Green Bay Packers. Now I was never into football, but I was fascinated by Mark's strength and vigor towards birding.  He birded like he might play football. All I needed was some guacamole and chips to watch him bird. That sounds weird so forget that last sentence. Not once did he stop and not once did he miss out on a bird song.  A bird would sing and he would ID!  Incredible!  And all the while, he spoke in a loudish voice telling midwestern jokes using slang which can many times be lost on the rest of the world. I tried to spend time with all three while still snapping shots of elusive warblers and other small birds.
And there were so many great birds.  But the heat!!!  Ugh!  We are reaching that time of year when I bird early morning until about 11 AM.  Then I go home and take a nap and if I get all my chores done, make for an evening birding somewhere close to home.  It would get hot.  I had my water pack on because I sweat way too much.  It's in my DNA. But even with all the water in the world, the body can only take so much heat.  I could see that Kathie was getting tired.  The protector in me watched over her.  I could see Mark far ahead.  The chaser in me kept tabs on Kathie and moved quickly to snap a shot of a Virginia's warbler.
There were truly so many incredible birds in this location, but I began to feel a bit...um....bloated.  It was not a good feeling.  We went up in elevation, walked in the heat, and had some food.  Not a good combo and for awhile, I kept my distance as air bubbles exploded inside my stomach.  It felt terrible.  Little did I know that Kathie was having the same issues:) Altitude sickness. We laughed about it on the way home.  And it's not like we haven't done these major hikes before but for some reason on this day, we didn't feel so good.  Gordon also reminded us that we did  get up at 3 in the morning.  And was it worth it?  Oh my gods, you bet!!! I wouldn't trade that experience for anything else in the world.  It was invaluable!
It was great to get into a new area and count birds.  It was also interesting to note various bird species mixed in together that normally wouldn't intermingle together around Tucson.   It was a little jarring to find normally difficult birds in Pima county all around Maricopa county.   Very strange indeed.
Gordon called our day a "3 Tanager Day".  For here, we spotted the Summer, Western and Hepatic tanagers in great numbers.
Also in great numbers were the Scott's Orioles and Black-chinned Sparrows.
The road up Mt. Ord is a very rocky one so be warned:)  This day was super dusty and the photos were some of the most difficult to snap.  By the end of the day, I had over 1000 pictures and about 20 of them were worthy of posting.
A special thank you to Gordon for a lovely day.  It was a blast and hopefully I can return the favor and get you some lifebirds in the near future.  I am linking up with Stewart M's Wild Bird Wednesday. Stay tuned for more.... 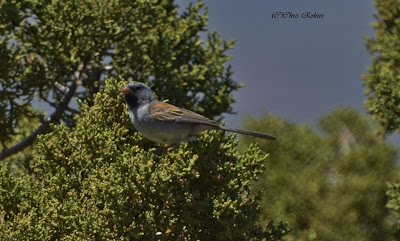 Posted by Rohrerbot at 8:12 PM