Who knew a gull could inspire so much happiness?  Growing up with gulls, I found them to be full of aggressive mischief and poop.  But on a recent outing with Kathie, this gull changed the way I felt about our day.  It was a difficult morning for me.  I had a hard time focusing.  I was tired.  And frustrated.  Essentially, I was not on top of my game.  What's worse was that I didn't get great shots of my lifebirds or any bird in general.  This was the only bird shot I was pleased with(above).  Kathie saw that I was not my usual self and was very kind and patient.  I've been pushing myself to do better, but as we all know and experience, we don't always have it our way.
In times like these, I have to remember to breathe and just take it all in.  I used to do this but my brain is wrapped around birds birds birds birds.  Plotting.  Planning.  Scheming.  Ultimately, it has changed me.  Not all for the good.  I understand why many birders get irritated on the trails now.  Too many people will spoil a day quickly.  Such was the case when Kathie and I went to Boyce Thompson Arboretum.  Now Las Aventuras took you there about 2 years ago.  It was an amazing place.  And it was actually my first time taking pics of hummingbirds (which aren't really so good looking back on them:)  That's the fun part about having a blog. We watch ourselves grow as writers and photographers. I can only answer for the photography:) We have to start somewhere.  There were birds and oh so many of them.  But do you think any of them would work with the photographer???  Not on this day.  Terrible shots would be taken of the Williamson's Sapsucker, the Warbling Vireo, and Verdin nest!  The lighting was all wrong.  And hawks were hungry making everyone hide really well.
So the biggest thing we looked forward to(the Boyce Thompson Arboretum) turned out to be the worst idea.  Sure I got lifebirds, but they came without awesome photos.  There were too many tourists screaming and shouting along the trails and THAT was frustrating.  I am a lister, chaser, photographer, and do enjoy the counts(as long as they aren't Northern Shovelers!:)  But I am chaser and photographer first.  We didn't dip on any of our birds this day, but I did dip on the photos and that made me frustrated.
So it made me rebel several days afterwards.  In fact, Kathie and I both had it up to our necks with people spoiling the birding mood and we went off and did our own thing.  When we arrived at Roosevelt Lake, it was like the dawning of a new day!!!  Except that the sun was setting.....as was the realization that we had a long drive back home! But what a truly magical and a great way to end our day.  Yet we both were sad that we chose to bird at Roosevelt at the end of the day instead of the beginning.  Live and learn I guess.  The days that followed made us focus more on the road less taken(by tourists) and our trips were unforgettable....and people-less.  And the glorious birds!!!
But meanwhile, back in my garden at El Presidio.  Spring has arrived.  My peaches and apricots are blooming.  The winds have changed.  No longer are the cold breezes present.  And with this change marks the beginning of spring here in the Old Pueblo.
Kathie and I would both continue to bird together and alone.  But we grew wiser about our planning and we birded before the great masses of people came full force.  In Tucson, it's high season for tourists.
Migration has really been an exciting time for us.  Sometimes it came from watching the Turkey Vultures blast off in the morning at Ft. Lowell park.  Or listening to the new chorus of bird songs around the city.
This Lark Sparrow below tweeted and fanned his voice like a bug to catch that lucky lady to begin their new lark sparrow family. Good luck buddy!
Families begin.  Rookeries form.  And all around us is this wonderful harmonious song that is carried forth on the warm winds.
The Sandhill Cranes of winter have mostly gone and left these fields empty once again.
During one afternoon after work, I stood in the middle of Sweetwater as thousands of Yellow-headed blackbirds flew around me. The wind from their wings brushed against my face and made me smile.  Again no people were present.

And the gull over the water reminded me why I bird.  It's not always about finding the lifebird or getting the shot.  Sometimes it's about taking it all in.  Kathie has that part down.  I still work on it. When I saw the gull, I felt energized again and excited.  This bird is the symbol of my hometown from Wisconsin and it reminds me why I moved to Arizona many years ago. In my own way, I'm that hometown gull who found his way into the deserts and canyons. On this night, I saw something incredible.....a majestic gull flying over a desert lake. 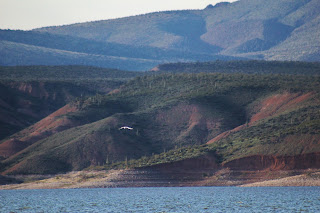 I must remember to pay attention to the direction of the wind.  Going against it is most unpleasant and creates more work. Yet when I move with the momentum, I float effortlessly like the gull over water. In other words, sometimes it's just best to stay home and not bird:)
Posted by Rohrerbot at 8:14 PM