Almost 2 years ago, I walked around an island with 2 friends.  I was not a birder at this point but enjoyed taking pictures.  We, including 7 other people, were all who lived on this island for several days.  I had a sub-par camera and liked snapping shots of monkeys, crocodiles and birds.  I didn't know what all the names of the birds were but I liked looking at them. 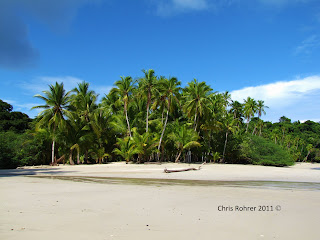 Now flash ahead to present day. I began looking back on old photos for the above image.  Whispers of a Black Hawk Migration began to surface and I wondered, "Had I seen this bird before? And if so, do they really come up through Arizona??!!" I do not celebrate Christmas, Easter or much of any other holiday.  But I do celebrate something else.....Migration! And apparently so do hundreds of other people!
During this time of year, birders from all over the world migrate to Arizona as they search for something rare and beautiful like the Common Black and Zone-tailed Hawks.  Today Kathie and I would search for the Common Black Hawk....which isn't so common in these parts! They prefer to fly over riparian areas as they head north.  If you head south to Mexico or Central America, you'll find them everywhere!  But there are several different subspecies.  In my first pic, you see a Common Black Hawk from the Mangrove subspecies which cannot be told apart from the normal Black Hawk.  I found this one near the mangroves on Coiba Island while almost stepping on a croc.
That was not so cool.  The shots were cool however:) Do you see him? How about now?  Yeah, Tanagers, Vultures, Kingfishers and Black Hawks would have to wait as I moved out of harms way.  Crocs are pretty fast.  I'm not sure he'd find a lot of meat on me but there certainly is quite a bit of fat to chew:) 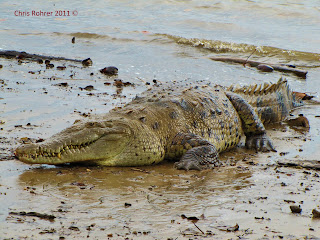 But back to Arizona.  On this day, both Kathie and I would witness, along with 60 other birders, the great Common Black Hawk migration!  I suppose it's a lot like Christmas for those who like presents with nice surprises.  For me, the best gift of the year came from the shot below.  12 Common Black Hawks took off around 9 AM to the delight of the crowds.  Birders started shouting, "Oh my god, it's a Ferruginous!!!"  "A Cooper's is displaying!"  "Look at all the Vultures!!!" "Did you hear that Larry had to go to the hospital?"  "Theres a Red-tail!!" And drum roll!!!!......"The Black Hawks!!!! The Black Hawks!!!!"  It was like being on Fantasy Island.  Only instead of Tattoo yelling; it was a smaller older lady.  And as quick as the hawks came into view; they quickly disappeared into the big blue Arizona sky.  The crowds began to dissipate.  Only the diehards stayed and got themselves a Zone-tail Hawk!  A good day indeed! But for that one moment, it was exciting to be around all those birders as they waited for the real movie stars to arrive. Those are the rare moments to celebrate!  What a show!

Migration isn't just for the birds.  The butterflies are also showing up again!  The first sign that spring has arrived comes from the Pipevine and Mourning Cloaks!  Here's a Mourning Cloak lazily hanging on a branch like a fairy would in a good fantasy novel.
If you are coming to Arizona, this is definitely the time to visit.  Crazy things are happening everyday and honestly, it's a bit overwhelming. 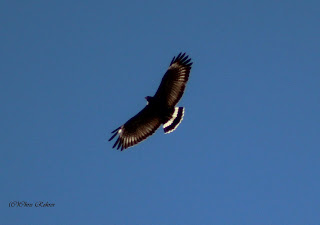 The Common Black Hawk migration will be around for another week or so.  The best viewing happened for us at the Ron Morris Park in historic Tubac.
This post comes from 3 different bird observations.  I went to find the Common Black Hawks at Ft. Lowell Park this past weekend in Tucson.  Around 9 AM, lift off happens for many of these birds. So we waited for the show to begin. And while on this day I didn't see any Common Black Hawks, I did find another friendly birder by the name of Molly.  Together we watched 86 Turkey Vultures rise above our heads.  A Kettle indeed.  All I can say is, "Migration. Is. Awesome!"
More to come....
Posted by Rohrerbot at 6:19 PM