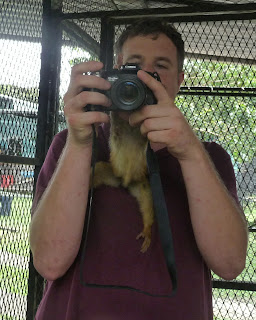 Today concludes this series on "Looking Back-Panama".  Our final leg of the journey was in the cool cool town of Boquete.  We had 3 weeks of extreme heat and humidity along with our hikes.  My body had bug bites all over it.  But here, we found solitude and daily rain with cool to cold temps everyday.  While my travel buddies hiked and did more; I did less.  I pulled out my kindle.  Stayed in my pj's and sat in a rocking chair on a veranda and watched it rain.....and rain.  I think this is where vacation began for me.  But I still had fun.  I love all animals and above this little guy is trying to help me use my camera.  The pic below was from my room.  Window open.  Fresh air coming in......I was happy. 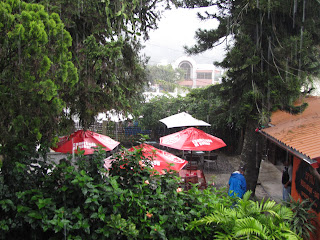 There were plenty of gardens to keep me busy during my mornings but I didn't do much more than that.  In fact the only big committment I made with my friends was the rafting trip on the Changuinola River.  There was a supermarket nearby.  I had a kitchen to use. And I just enjoyed making soup and salads....my favorites:)  But the best part?  Using new veggies that we didn't have back in the states. 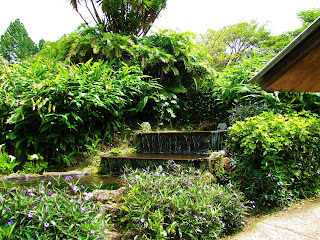 The gardens, of course, are in my mind the highlights of Boquete.  Some are free while others charge 2 or 3 bucks. 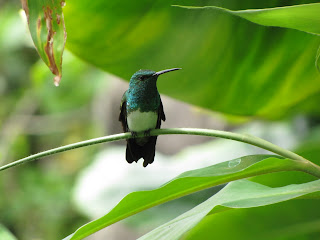 This garden below was free and had some interesting combinations of flowers, art, and fountains.  It's called Mi Jardin Es Su Jardin(My Garden Is Your Garden). 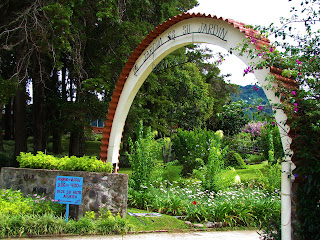 Most of our journeys were with cloudy and gray skies.  But don't be fooled.  Use sunscreen:) or you'll get sunburn. 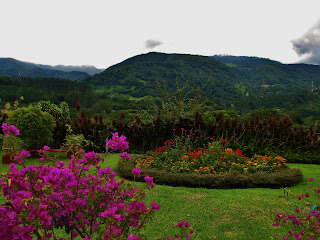 The monkeys in the shots were saved from deforestation going on around the country.  Panama, unlike Costa Rica, hasn't done such a great job conserving their last vestiges of pristine rain forest.  The US is, in part, to blame but so are the Panamanian people.  Areas like Coiba Island, The Darien Gap(one of the last unexplored areas of the world), Gamboa, and few parts of Bocas Del Toro are preserved.  But the drug war in the Darien Gap continues and makes this national park a dangerous place to visit.  Columbians are slowly cutting their way into the park for the resources.  Rare species are threatened.  Poaching is involved.  Sometimes a job is botched.  The parent(monkey) is captured but the offspring are left to die.  That's where refuge centers come into play.  These monkeys were friendly but if you've never had monkey friends, be careful.  They smell, they will steal your clothes, they can bite, and they can do some serious damage:)  So know your monkey before you access that inner monkey in you:) 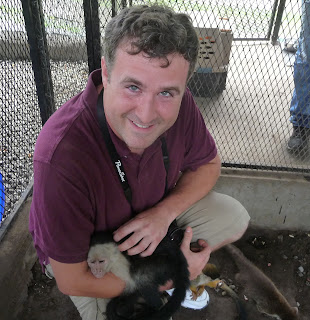 Birds birds birds.  I grew up with them and respect the bird.  Many of the animals and birds trust me and somehow know that I've had some bird training:)  I walked into the cage and this big bird flew on my shoulder and sat there the entire time.  I had rotten banana smeared all over my collar, bird poo, monkey poo, bug bites, and of course major sweat going on during this visit. 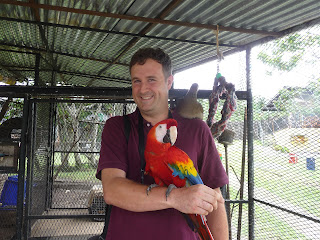 I do love critters. My heart breaks everytime I hear, see, or observe this violence by humans towards other living things on TV or around me. Some programs I won't even watch because there is an anger that surges. Why are humans so careless?  Money, selfish needs, and the lack of respect for their environment.  I still can't believe they allow for safari hunts in parts of Africa!  And I'm not going to lie, it is a heavy burden to live with.  Some people call that being sensitive.  I call it a heavy feeling in my heart that I can't erase.  It's been there ever since I've been a child sitting in class learning that things can and do go extinct.  It began with the lecture on the California Condors.  The teacher spoke about dinosaurs and how they went extinct. And then she asked that question.....the one that would rock my world.  "Does extinction still happen?"  Innocence gone. And that would open up more doors and more questions..... 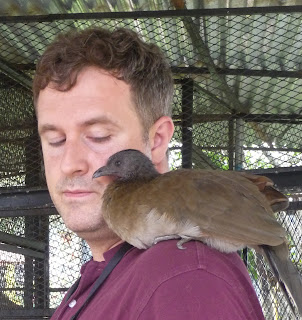 .....but for now, I'm a "have to see it" guy.  It makes me feel more aware and more connected to the greater world.  And as I learn more, the stronger my knowledge about wildlife becomes. 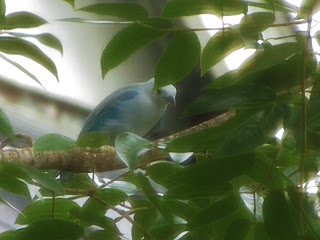 So while I won't find Blue Tanagers or Agouti in Tucson, I am greeted by all kinds of my critters that live here in our Sonoran Desert.  The Central American corridor leads up to our Arizona desert in so many ways as can be seen from the birds that make it up to our mountains and canyons. 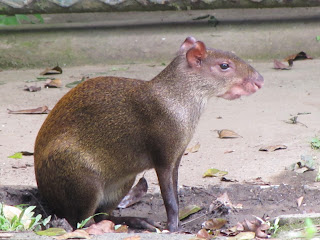 Like the Caracara.  This bird has been seen here in the most southern regions of Arizona.  Who knew? 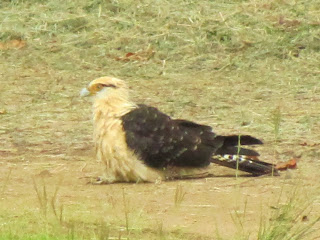 I love this crazy shot of the Capybyra, Caracara and Black Vultures. 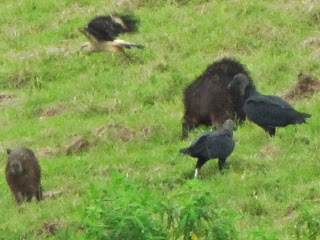 Panama, like most places I have visited, was an eye opener.  Here are some highlights from that trip last year.  And that ends the Looking Back series for Panama. More tomorrow....
Posted by Rohrerbot at 12:00 AM