I don't usually write about a fruit unless it's "new" to me and it's noteworthy like the persimmons.  This year a student gave me the gift of the "apple pear".  I don't like pears because I did one of those things that we all do when we are younger.....eat too much of something that makes us never want to eat them again.  Before I begin this blog, I should note that these pics were taken from the internet and are not my own.  They come from fruit companies and I chose pics as they appear in the grocery store including one with a cute little skirt:) 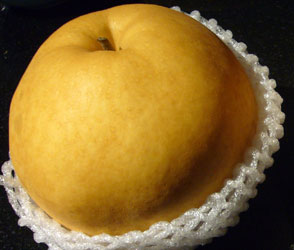 Story time.  My grandparents, on my father's side, were avid gardeners in Wisconsin.  They had two very large healthy pear and apple trees growing behind their vegetable garden hidden amongst a secret grove of pine trees.  We would climb the pine trees as kids and hide in our forts. When it was time for a snack break, we'd head over to the fruit trees where we'd grab an apple or pear.  Apparently, even though I don't remember too much of why I did this, I ate A LOT of pears one day.  In my head, it was like a million.  I don't think it was a dare....I just think the pear flavor took over me and I couldn't stop eating them.  Afterwards, I remember turning green and getting "sick" by my Grandma's kitchen sink with Grandma yelling at me for eating too many pears.  My sister was with me and she kept saying, "I'm not throwing up Grandma. I didn't eat all those pears like he did." (There was always this sibling rivalry between us as kids...now we're super close)  At that time, I wanted to smack her, but I was too sick. Once my poor stomache calmed down...and poor Grandma!, she told me to be careful the next time I started eating fruit. Unfortuneatly, there would never be a next time because when I had tried to eat a pear, I started feeling sick....that's how traumatic the experience was. Fast forward to present day.... 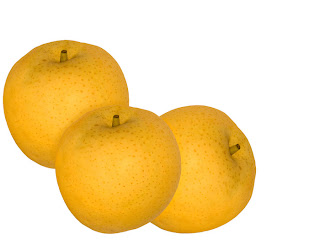 My student, who brought me these "apple pears" said that I'd love them.  Secretly, I kept my personal story from her.  They were beautifully wrapped in a fruit crate.  I thought, "Oh it's one of those hybrids." Why do they do this?  (i.e. the Grapple) And what an unoriginal name?  The fruit itself was yellow like a pear, and to me, it was unattractive but it had the name apple in it so I said to myself, "Keep an open mind."  I took my first bite.  Holy %$^$!  I couldn't believe the flavor!  The fruit burst with dripping juice all over my hands and mouth.  I couldn't stop eating it because IT WAS THAT GOOD!  So like a geek, I kept the seeds to plant later on because I didn't know if they were just a seasonal thing or if they were just a random one time only thing.  Turns out that you can buy them all over the place and they've been around for years.  I purchased another crate of them from Sam's Club.  They were pricey, but the flavor is out of this world!  The fruit is also known as the Asian Pear. http://en.wikipedia.org/wiki/Pyrus_pyrifolia
They also appear to grow as trees here in Arizona with fruit bearing in mid-summer. This is NOT a hybrid but an actual real fruit! It looks like another fruit tree is going into the ground in spring:)  I just need to remember not to over do it because Grandma is not around anymore to help me out:) Try it out! 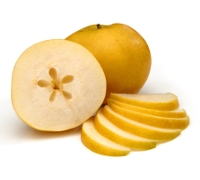 On a side note, thinking of that horrible pear experience, makes me smile.  It's sad today because both of my grandparents have passed away and their large forested backyard is now an empty lot of grass.  The house was sold and the lot that used to produce amazing things is now empty.  The fruit trees were cut down to keep the riffraff from entering their property. The wooden gate covered in grape vines with the very cool totem pole in front....gone.  The dying pine trees are shabby and not taken care of......and I'm one of the few people to remember this place in its' full glory. The only thing that remains is a patch of rhubarb that comes back every year as a reminder that something used to grow there.  Here's a parting thought. Our role, as gardeners, is an important one....educating others is our legacy for future generations.  My grandparents passed their knowledge onto me and now, I share my love with others. Today, with our busy schedules, we are losing the art of gardening amongst other things.  My grandparent's empty gardening lot is a reminder of why I do what I do.
Posted by Rohrerbot at 10:47 AM

Email ThisBlogThis!Share to TwitterShare to FacebookShare to Pinterest
Labels: Apple Pears, asian pears Tucson, the Asian Pear, what does an asian pear taste like?, what's a asian pear?, what's an Apple Pear?