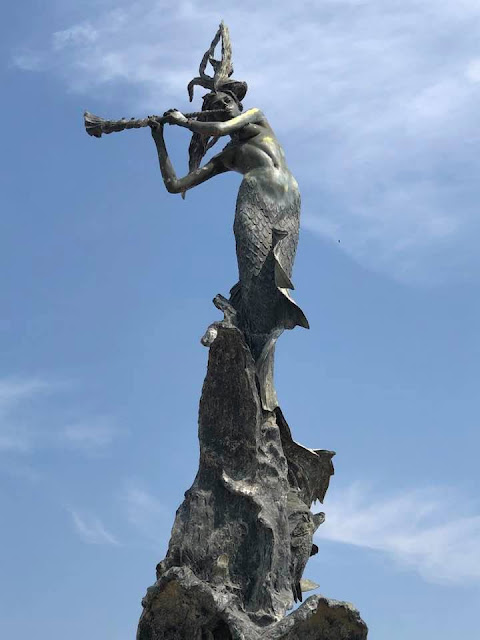 I sat thinking for a month what I wanted to do for my fall break.  Originally, I had wanted to do a spiritual retreat at a monk sanctuary in Guatemala, but that will have to wait.  October is a very special month for me.  It's the month of beginnings and reflective work.  If I couldn't lose myself to chants and birds in Antigua; I would have to think about the next spiritual place that makes me feel whole as a person.....and in the US.  Oregon and Washington were too far to drive.  But the coast of Southern California was close enough to spend some quality time with birds that I don't often get to see. 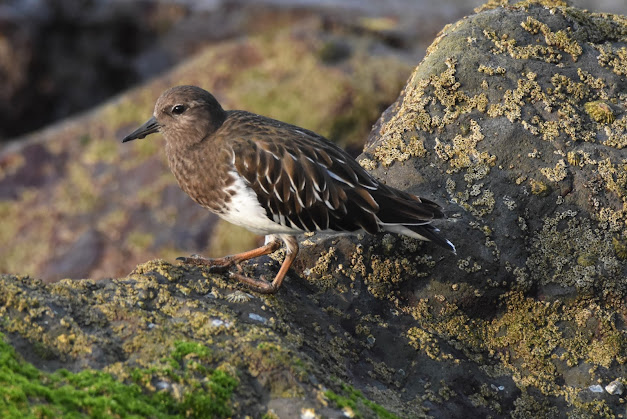 Celeste and Cheroot joined me for the second time this year to do some very special birding in another part of Southern California.  And it wasn't just birding.  My only expectations were to find the endemic Yellow-billed Magpies and get photos of them.  Each day was meticulously crafted for maximum ocean use. We stayed in Ventura near the beach in a very questionable hotel. However, everything was within a mostly 10 minute driving distance. 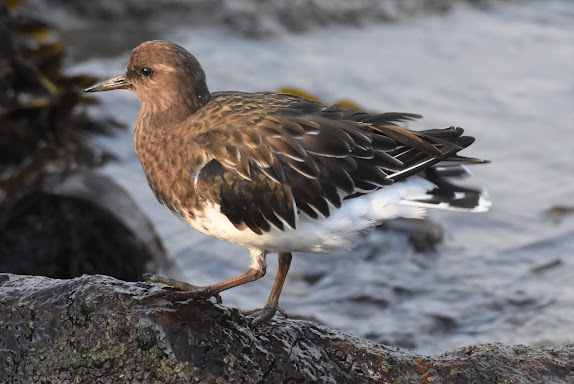 We arrived on Sunday in the early afternoon. Our Sunday and Monday rules were to have fun on the beach.  Tuesday was a trek out to the beautiful Santa Cruz Island.  Wednesday was a short drive to wine country and magpie land.  And then Thursday, we needed to get home.  It was so fast! 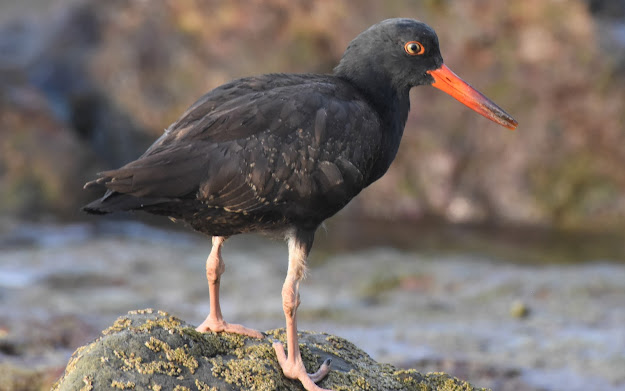 Perfection?  Coffee and fresh clam chowder on the beach. Or how about a misty coastal fog that blankets the beaches?  We walked the beach for miles.  Sometimes we sat and observed people.  Other times I got up close and personal with some shorebird favorites. There were so many birds along the Venturan coast. 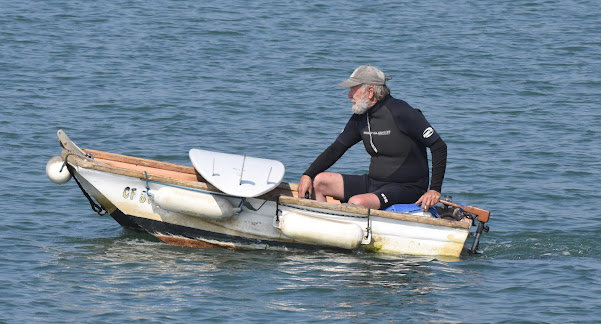 During our stay, we met birders who also had similar ideas about escaping the Arizona heat and it really was refreshing to bird all day long. But unlike the other birders, we weren't really chasing any new birds.  If fact, there weren't any lifers on the list.  I just needed the ocean and a magpie shot which really makes the birding stress free. 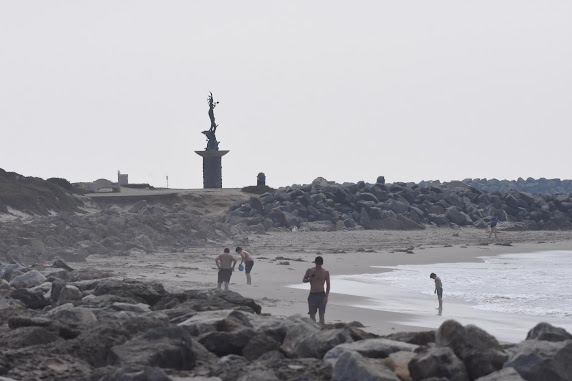 Birds are incredible.  While we have Long-billed Curlews in Arizona, this species makes for a better observation here along the coast. 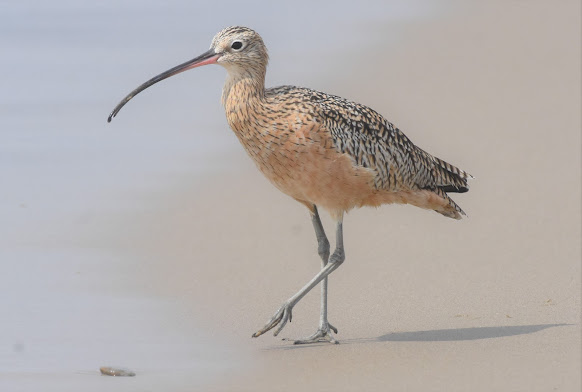 People walked the beaches, but the birds didn't seem too concerned.  Sometimes they would just come within a foot of us if we stood or sat still.  It was here that we were able to witness a little courtship display between the curlews below.  It was very beautiful.  Their wings half raised and flutter beat at the same time in a tight formation. 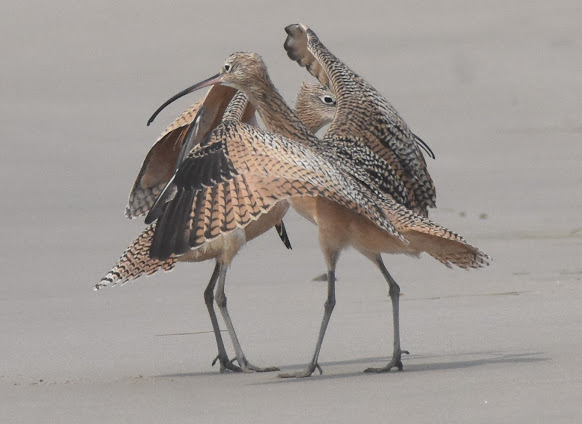 We watched these birds forage around the beach for sand crabs and fleas. There were plenty of insects as well zipping around the seaweed. 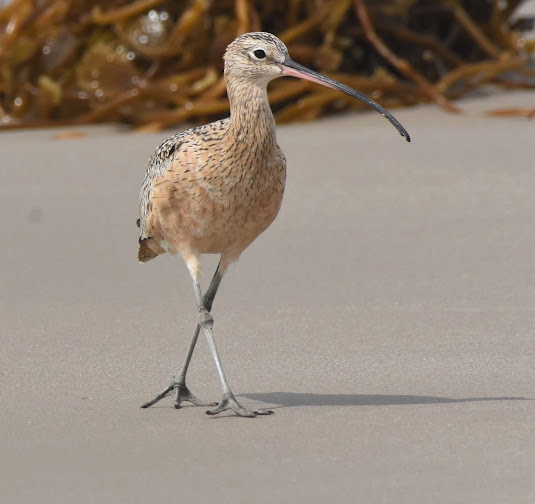 Meanwhile Cheroot was discovering sea weed on the beach.  There were piles of them. Sometimes he'd pick a kelp branch up and run with it.  Never have I seen him so happy running along the waves.  Being that he's also blind, he was shocked when a wave went a little too far and wet his paws. I don't think he minded too much. 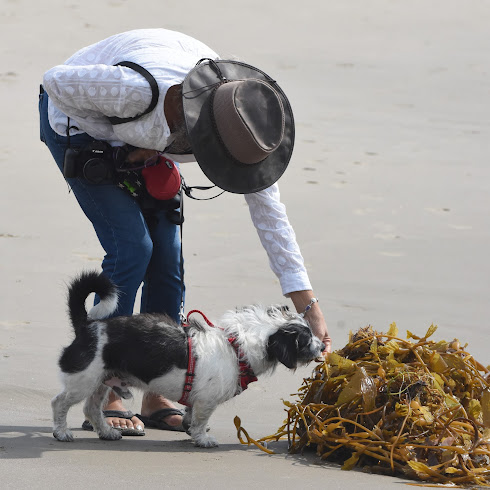 In fact, much of our sightings were quality bird observations.  Often, we'd just sit and watch the birds up close. Our rare bird sighting happened in the gardens of the Channel Islands Tourist center on the beach.  There we spied a Black-and-White Warbler.  I can NEVER find them here in AZ but if I go to Ventura, I magically will find one.  This was my second rare Black-and-White Warbler in Ventura.  And I've only been to Ventura twice.  So I'm a magnet for that warbler there.  Anywhere else?  Forget about it. 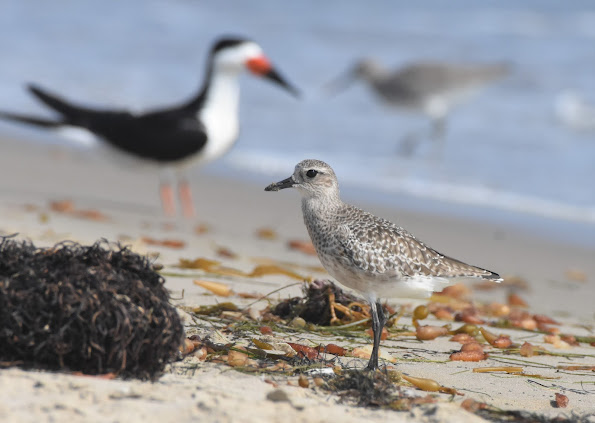 The ocean called us.  And we listened carefully. There were seals.  There were whales and foxes and deer.  And at times, we stopped at places like a fresh produce stand where we bought a huge bag of sweet oranges for 5 dollars.  I also purchased 3 punnets of strawberries.  I also learned some new English from Celeste.  She is of course from the first age of proper English speakers.  Americans are savages in every way possible and I clearly have a limited vocabulary set. A PUNNET is the little green basket that holds strawberries and other goodies. OH! And I bought a huge bag of avocados for 5 bucks!  Anyhow, I brought my magic cooler that keeps everything nice and cold and was able to get them back home in pristine condition. I wish we had produce stands like this in Tucson! 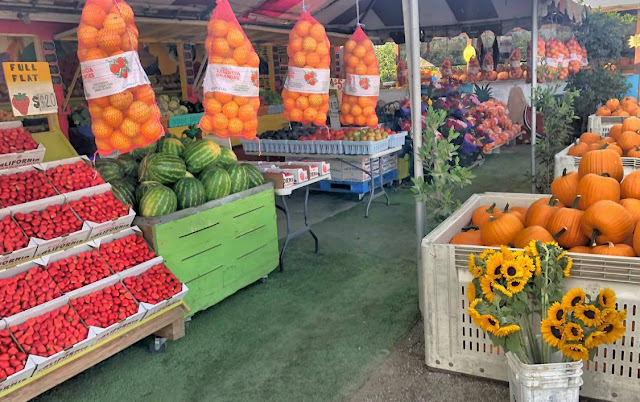 These kinds of stands are possible thanks in part to the hard working hispanic population in and around Ventura.  It reminded me of the markets in Mexico and it was wonderful. 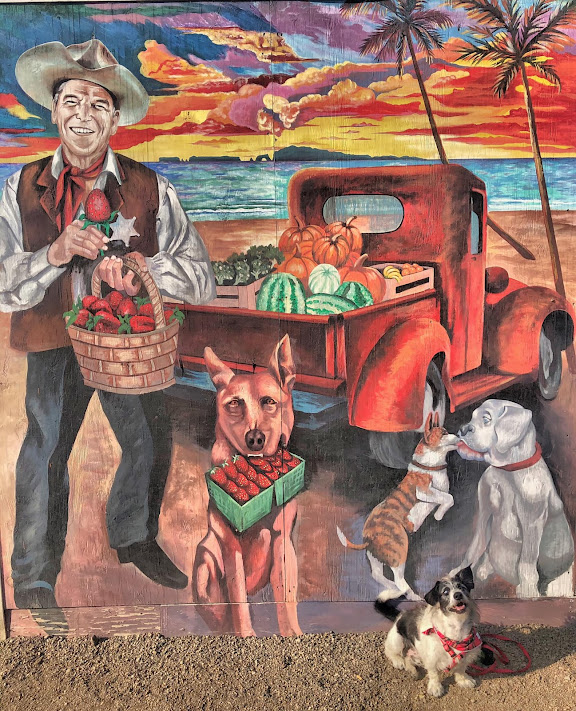 Everything was dog friendly for the most part. Sometimes, you have to return to a place to absorb the things you missed the first time. Over the next couple blogs, we'll rediscover why I love birding Ventura so much.  But we'll be visiting new locations that I had never visited before.  We'll stop at Prisoner's Harbor on Santa Cruz Island.  Several years ago we camped at Scorpion Campground.  Then we'll have some wine with a magpie outside of Ventura.  Until then, stay safe. 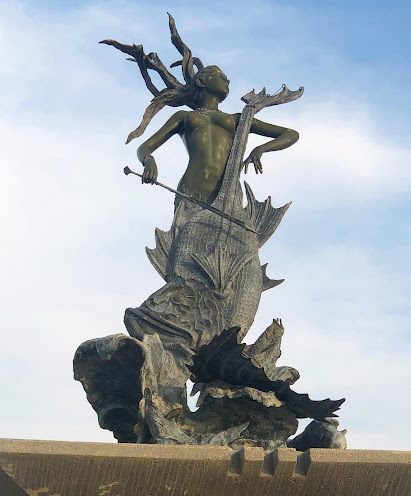 Posted by Rohrerbot at 7:50 PM

My Corner of the World