A Season of Studies


This new year has taken a strange yet welcome turn of events here in Tucson.  Things I had thought about separately are now merging into one big blur.

First, I need to write about the projects. I have been serious for years about the Monk Parakeets of Arizona.  There was once a feral population back in 2004.  While most people blew the bird off(it's an exotic non-countable bird for listers), I was actually interested in finding out what had happened to them. And like a good detective, I interviewed neighbors over the years who had told me that they had hired someone to "take them out".  I didn't want to get into specifics, but I understood that they were removed from the area.

On January 1st, I did a study with Magill Weber on the exotics that have established themselves in the state.  I have been ebirding my data on the Monk Parakeets for several years with detailed data. Gordon Karre has also followed up on reports around the Phoenix area. A couple weeks ago, an AZFO(Arizona Field Ornithology) member by the name of Kurt Rademaker found an old report of mine and asked if I would be interested in writing up a paper and organizing a census.  He is also the same person who is responsible for getting the Rosy-faced Lovebirds on the state list.

I know Monk Parakeets well. I grew up with them and I raised them with my Mom from egg. But to do a paper on 4 or 6 random parakeets found around the Phoenix area?  No.  So Magill and I both decided to visit several of the historical areas where Monks had been seen in smaller numbers. For years, I have been searching for this colony.  Every year, a Monk or 2 would show up in random spots like a hotel or person's backyard. I knew that they weren't escapees and that they were coming from a large colony somewhere in the Phoenix area. So we followed the electronic trail. We needed answers. 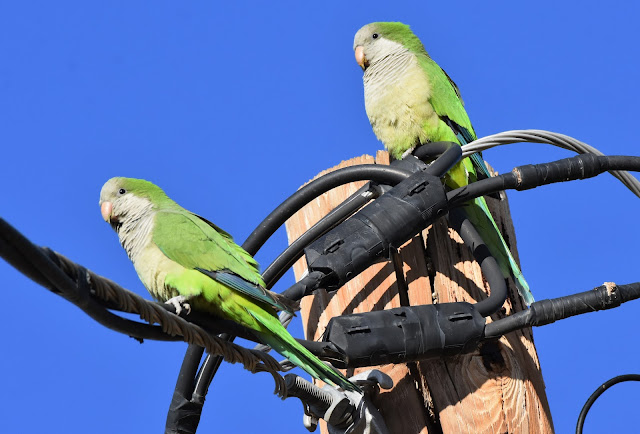 I needed breeding evidence to seriously consider this request.  And by pure accident, we found TWO colonies of Monk Parakeets in an area south of Phoenix.  It was like the Holy Grail for me and finally answered the 8 year question that had bothered me for so long.  Where did the Arizona Monk Parakeets go? 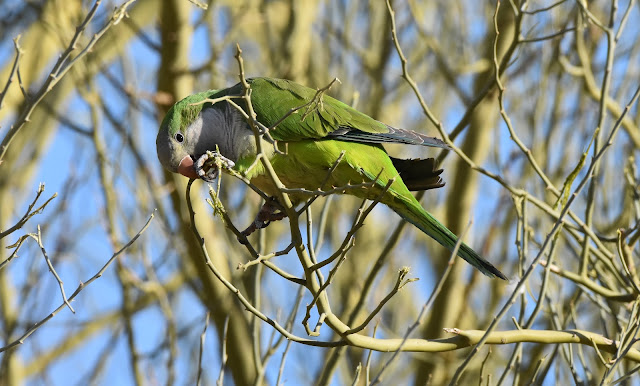 It is a serendipitous moment that I won't soon forget. I'm supposed to be the "navigator" but everyone knows that I am terrible at it:)  Magill asks me, "Where do I turn?"  Me, thinking I know the directions, tells her to turn down the wrong road in the wrong direction.  Classic me.  Then a flock of Mourning Doves flies over her vehicle? NO! WAIT! A flock on Monk Parakeets!!!! We both pull over and gather our whits. It's something we both witness for the first time in Arizona.  Monk Parakeets calling from all over the place! We have a moment and witness something very rare and special.  There was evidence of breeding as a parakeet flew out carrying a branch to a secret nest on private property.  And there was evidence to prove that the colonies were feral/wild as they flew away as I approached them.  We are hoping to have the first of our population census at the end of February. 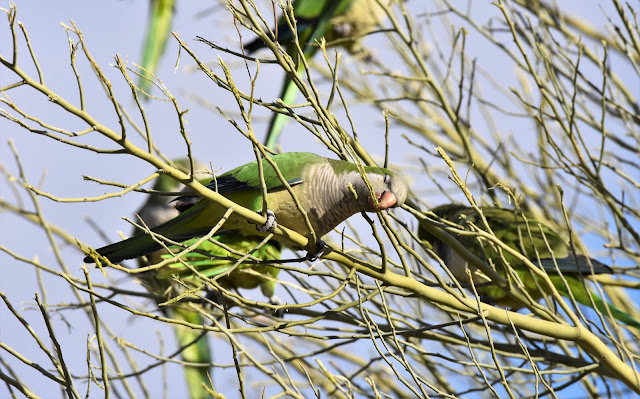 This January, I helped with a CBC count in Pinal with Keith Kamper.  Keith had access to private property along the San Pedro river and I was immediately interested.

Part of the riparian area had burned thanks in part to an ignorant resident burning brush during the driest month of the year!  But not all things are terrible.  The fallen branches and trees created brush piles for hundreds if not thousands of sparrows!  It was amazing!

Along the way we'll be meeting old and new friends alike discovering new things.  In March, I'll be giving a lecture in Wales about Arizona birds. Then the busy season of guiding happens.  My friends will have finished their birder's casita and I'll be there to guide when needed.

Birding requires a strict budget with strict planning.  I think in one day I was working on the details of my Wales' trek, talking to Gordon about our lek trek in April AND planning for a pelagic in Maine with Kathie Brown for a very special photo shoot this summer.  I love it but I am definitely not a casual birder.  There are goals!  On top of that, a budget and savings account are needed!  Any extra cash flow goes into the treks.

I've also been working on other projects.  In winter, I really enjoy being outdoors.  I've finished the hummingbird part of my garden which has plants that are favored by butterflies and hummingbirds.  I utilize plants with red, orange and yellow tubular flowers. Plus I hung up some solar lights on a curved metal piece for honeysuckle to climb, another popular treat for my Broad-billed Hummingbirds.

January is a great time to get any artificial nests all situated.  As you may recall from this blog over the years, we have a pair of Great Horned Owls who nest during this time every year under our Ironwood Trees.

Over winter break, me and a couple friends fixed up their nest box.  We now wait.  She will begin to lay eggs either this month or next.

And at home, I have put up Lucy's Warblers nest boxes to help promote nesting in my garden. If you have a mesquite or several, it's a great idea to get a couple boxes from Tucson Audubon.  They're 5 dollars a box.  If you live in Arizona, I highly recommend checking it out. They're easy to install. Lucy's Warblers will begin to arrive in March and will begin their nesting right away.

I have a regular job, but it seems that every year, I am pulled more and more into the birding world. I don't mind it.  It provides escape, something I much need these days.  The world sometimes feels like it's tearing itself up.  I don't recognize my country anymore and it's the wild spaces that prevent me from going crazy. But now even that is a mess! 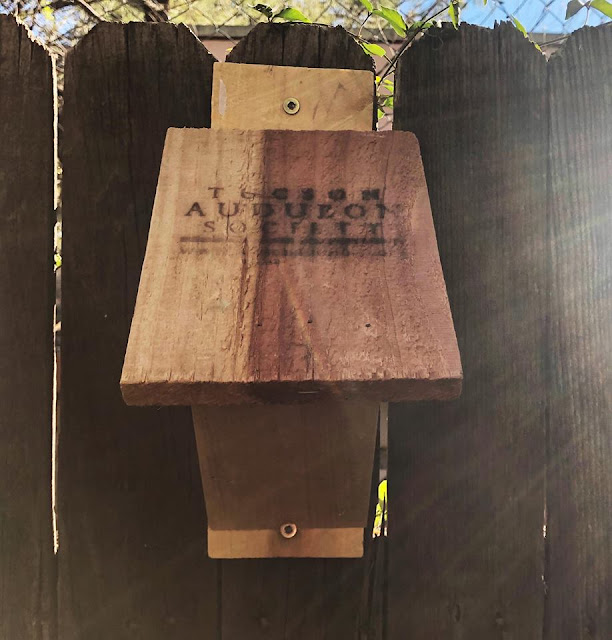 During a moment of anxiety, in the middle of the ridiculous government shutdown, caused by the orange baboon, I needed to breathe and walk in the snow landscape of Madera Canyon. He's a complete idiot.  The wall is an ecological disaster that will cause great harm to the wildlife here. AND currently, I have friends who are not getting paid at their National Park Jobs.  And the National Parks are getting trashed.  It's horrible. I see it.  It's not made up. Now I can't even escape it. 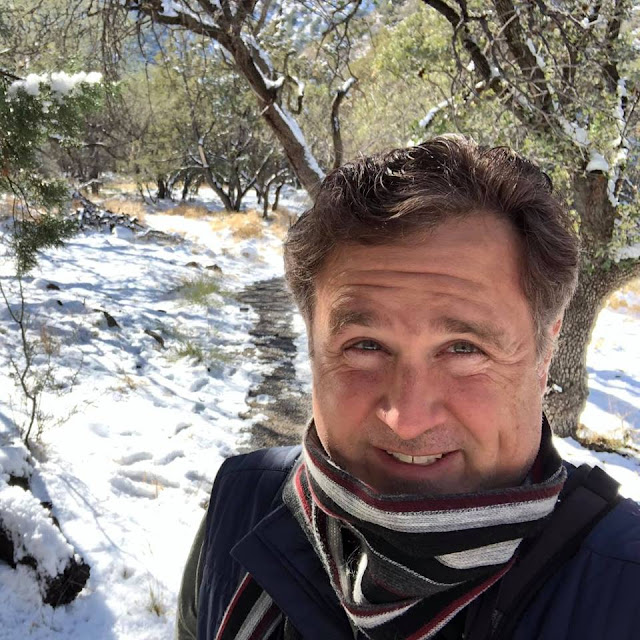 So I walked and found this perfect moment. My talented friend Kathie Brown wrote this beautiful poem based on the pic below,


"When sunlight through the forest streams
and plays its little dancing beams
like golden fingers in the creek
this woodland magic makes me seek
the beauty of these Nature places
which soothes my soul and then erases
the worries that the world imposes
on our hearts and mind, exposes
why we need this quiet place,
this woodland glen, this open space,
We leave renewed and refreshed
From all this lovely wildness."
~Kathie Brown, 2019


I'm glad I'm not alone in this world and that others are also going through this madness as well. This poem brought a smile to my face. In other news, the blog has hit one million views. Thank you for following! Until next time......
Posted by Rohrerbot at 4:01 PM