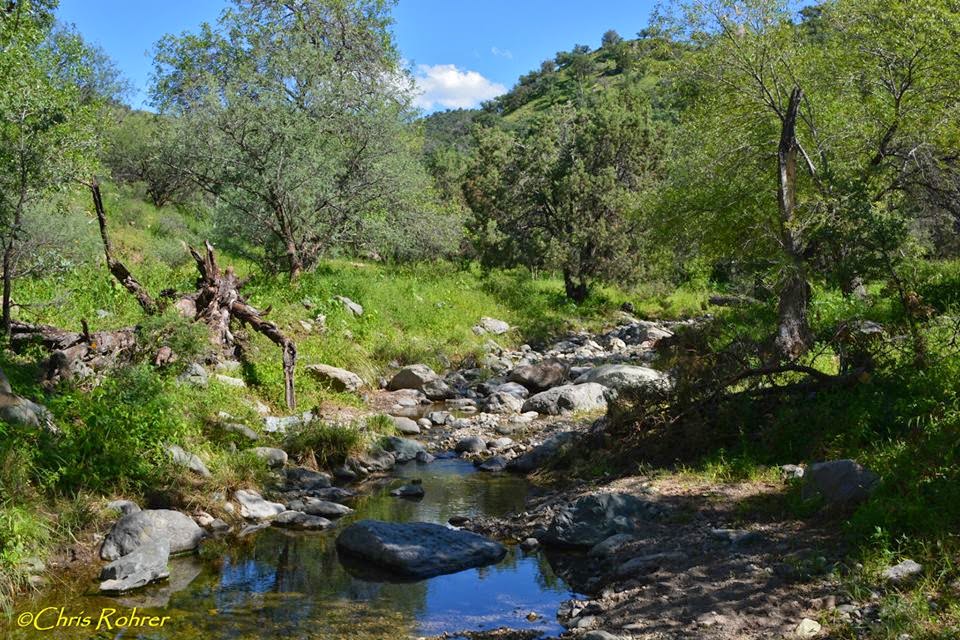 The body grows tired, and my work gets mixed up in flowers, lizards, snakes, bats and bugs.  But onward I trekked with an amazing crew of wildlife trackers and herpers.  Being one of two birders, we safely entered the state of Sonora, Mexico which borders the southern part of Arizona.

We camped for several days and nights without electricity, air conditioning and other creature comforts.  And yet the rewards were higher on this trek than any other because we were in some remote areas around Sonora.  While the birds were in great numbers, they took a backseat on this trek.


Some of the greatest mysteries still remain on the mountain tops of Northern Mexico.  Sonora is an amazing state full of surprises. As I've reported before, Arizona is a well birded state in most of the various regions.  In contrast, much of Sonora has not been ebirded. It's rather sad since it's all connected. Part of my job at our locale was to find birds and other rarities.  Birds like Green Kingfishers and Five-striped Sparrows are often seen in these places and this time was no different. 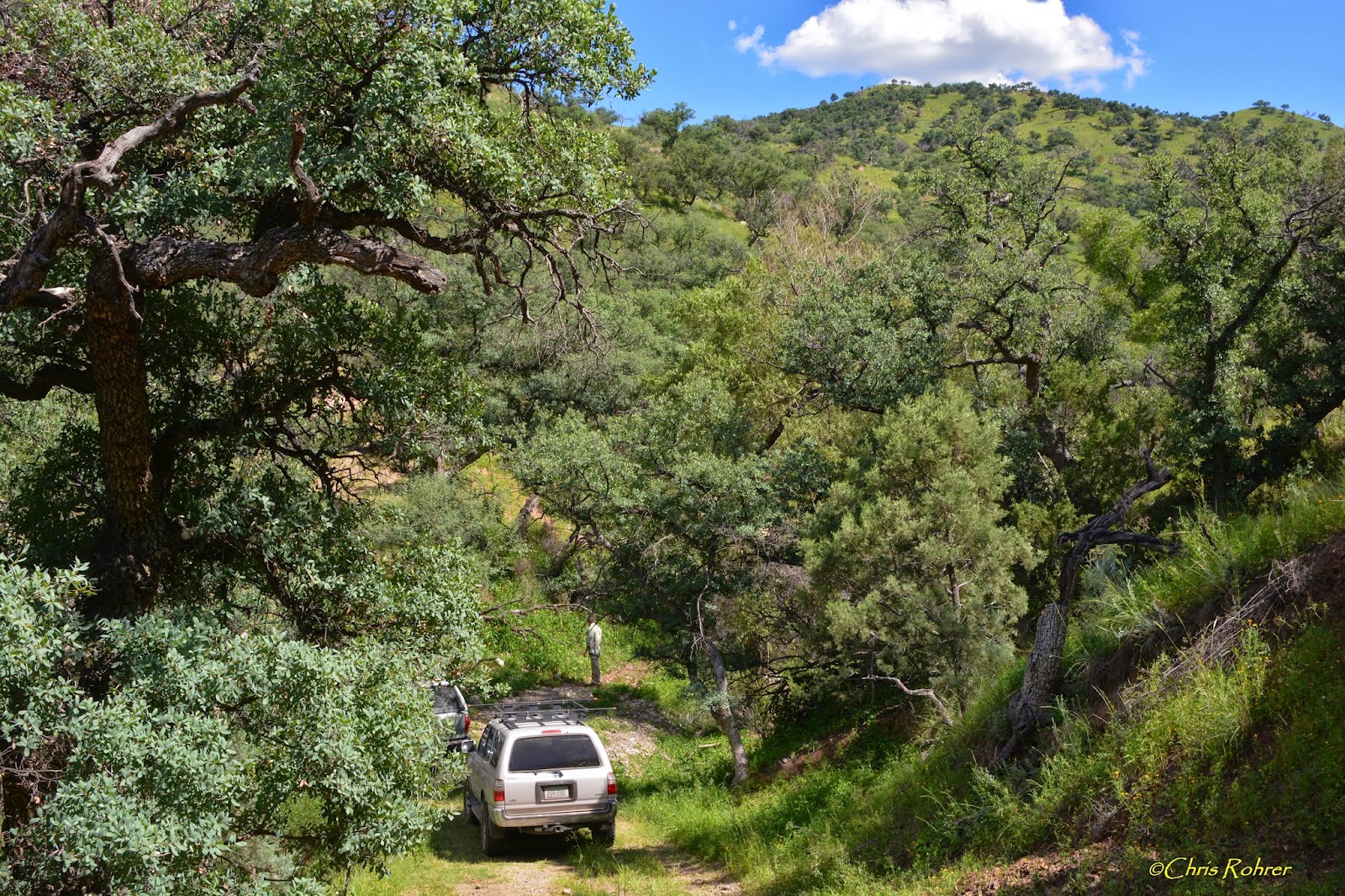 I'm not a rough and rugged hiker as I do prefer the softer side of camping. And yes, camping can be fun and comfortable! One of my big dislikes for this time of year comes in the form of scaly fanged critters known as snakes. It makes birding a challenge! There were rattlesnakes and other venomous creatures hanging out in the thick grasses.  In one situation, I had a Black-tailed Rattler sound off with a loud "RAAAAATTTTLE!" and flee further back into the grasses!  I did my heebie jeebie dance and got away from the area.  The herper with me was sad that it had escaped. While I was freaking out, he was running after the snake!  Hopefully he didn't look back and see me doing my willy nilly freak out.  And yes, guys can admit that snakes freak them out.  Just don't kill them.  They are good to have around.....just not my personal space.  Herpers are a fascinating group of people.  Both birders and herpers are nerds in their own sense but I'll just say that one group is wilder than the other:)  Might have to challenge those stereotypes! 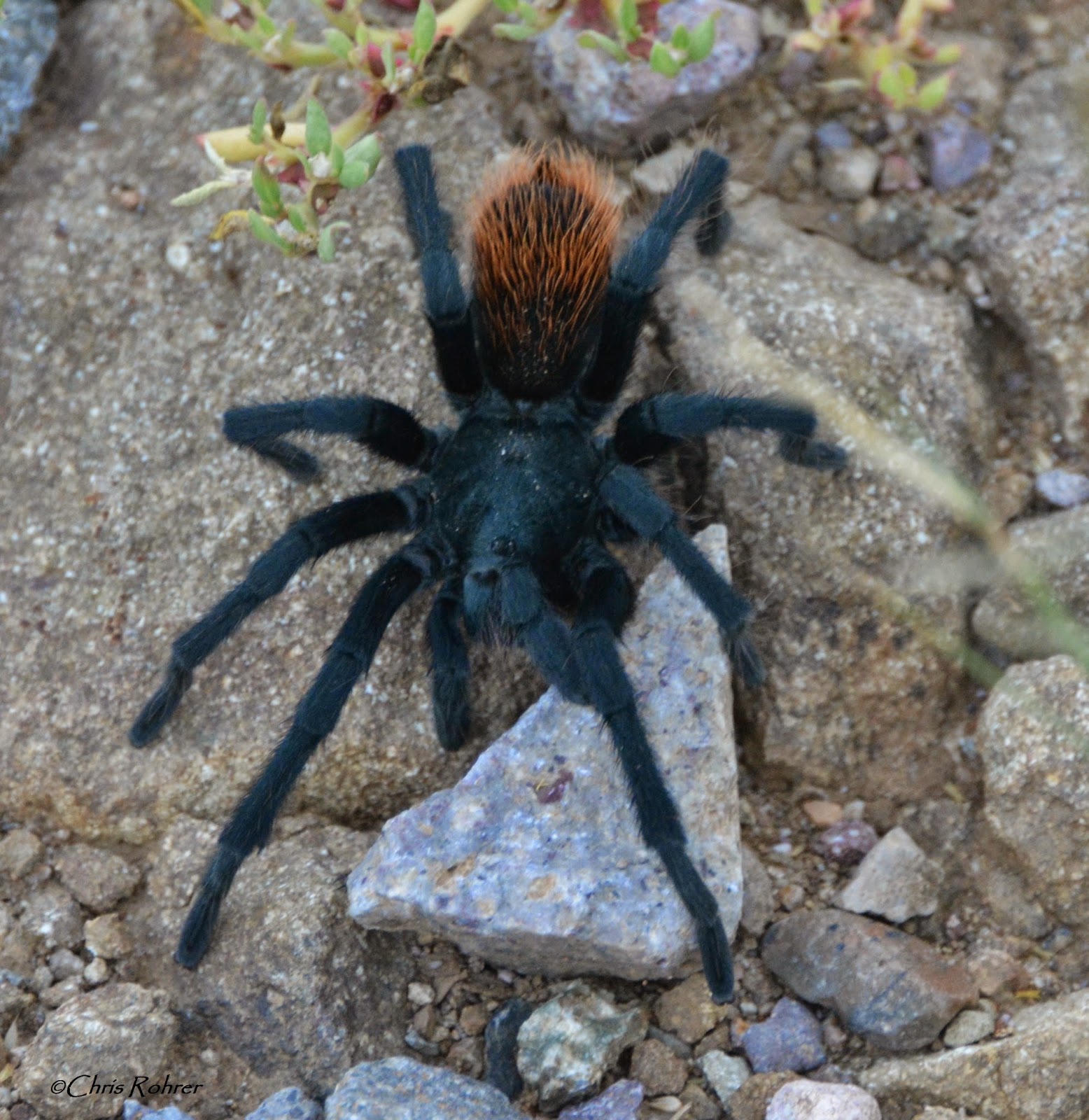 It was hard to ignore the many beautiful butterflies around the area. However our mission was to track Jaguars.  These elusive creatures had been found around several spots and so we went to check equipment around the various locations.

I am truly fascinated by this state.  This year Las Aventuras took you to Rocky Point, Sonora for a seabird adventure.  Now we're visiting the interior mountain region of the state.  It's a large area to cover and I hope to get further south for a closer look at the indigenous peoples and their tropical birds.

Finding a crew to go to Mexico is no easy task.  Not many Americans feel comfortable these days crossing the border.  And rightly so!  BUT crossing the border was a much safer option for me than staying near the border on the Arizona side to observe Five-striped Sparrows.  This year we ran into drug trafficking around the Ruby Road area and it was a bit unsettling.

One of my favorite things about the Sonoran desert is how wild and dangerous it all can be.  Poisonous critters, spiky cacti, heat and strange human varieties all inhabit this vast landscape.  Coming from Wisconsin, this place continues to fascinate me.  Every day I wake up in MY HOME, I think.....I live here!  I really really live here!  Purple sunsets.  Prickly cactus pads.  Sparkling hummingbirds.  Colorful lizards.  Outdoor dining.  Mountains.  Canyons.  It's all so beautiful and overwhelming at times.  And much of it is still so very wild.

The Sonoran desert enters a good portion of Mexico. Political lines, drug issues and very remote and rocky roads can make this area very undesirable to explore. And maybe language barriers:)  I'd love to piece together the "birdscape" puzzle between Arizona and the state of Sonora.  I'd get to use my Spanish and study birds.  Pretty awesome!

While on this trek, a major discovery happened for me.  I glanced down on the ground and noticed this strange looking snake.  But it wasn't a snake.  Instinctively I knew this but it took me time to wrap my head around the creature I was staring at intently. Once my brain ID'd this lizard.....yes lizard......I did a secret herper lifer dance.  The move looks something like a snake wrapping itself around its prey. Not pretty at all.  There are not many lizards or snakes that inspire me to move in a positive manner, but the Madrean Alligator Lizard is like finding a Montezuma Quail!  Herpers and birders alike rejoice at these beauties.   Note their tiny tiny feet.

With the recent monsoon rains, the canyon was ALIVE!  Imagine Julie Andrews singing the "Hills are Alive" running through the grasses and then getting bit by a venomous snake.  That's how green the mountains and canyons were!  Black and Turkey Vultures would quickly find her body and have a snack. Definitely not a Disney production:) Thankfully Julie never ran through THOSE grasses.

Most of the time, it's all very brown.  Yet with a wet rainy season, everything really greens up nicely!  All of this happens within a matter of a month! 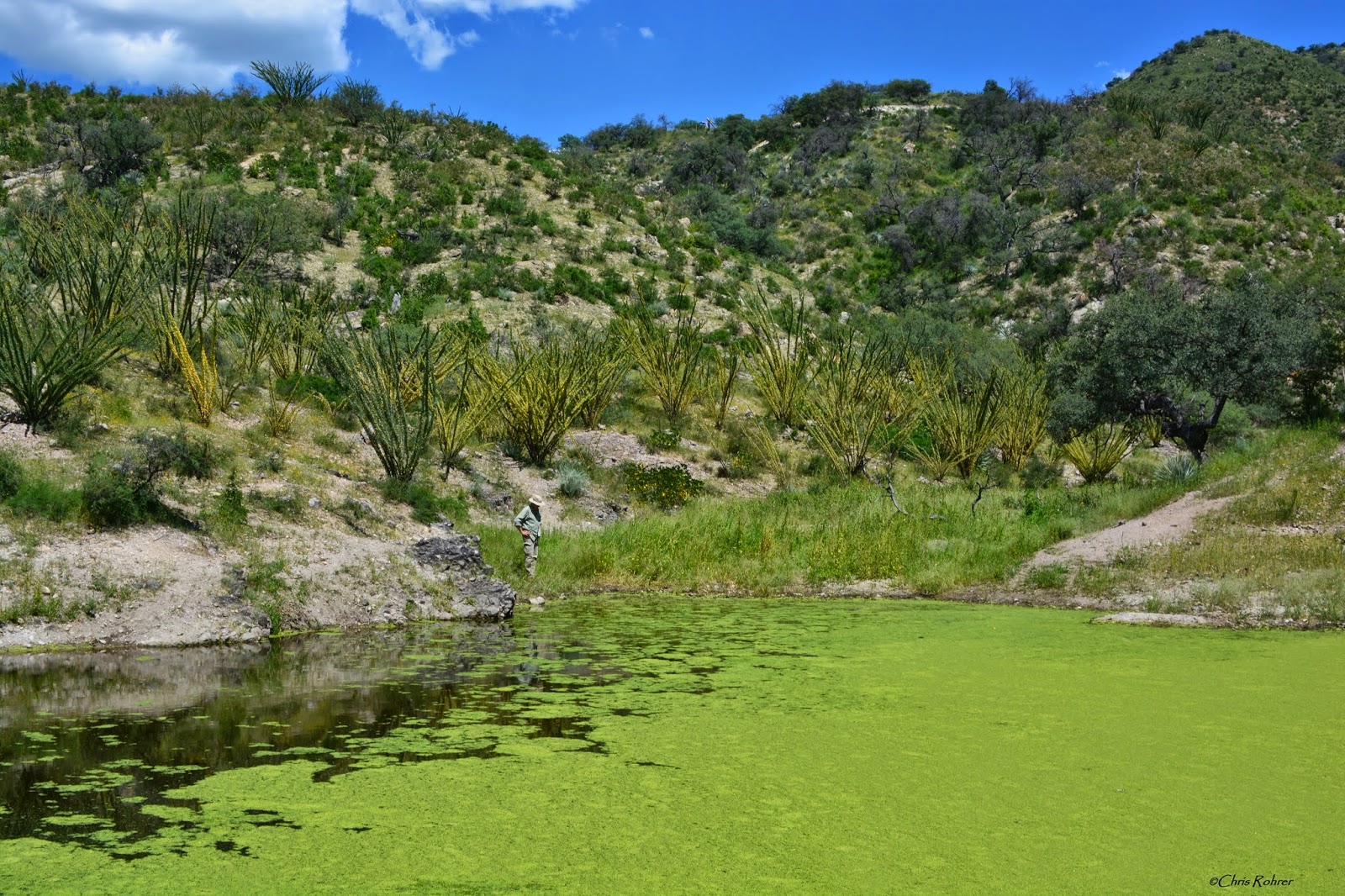 The warbler migration has begun.  Most evident were the Nashville, MacGillivray's, Yellow and Wilson's Warblers dripping from the trees!  They were everywhere.  Blue Grosbeaks and Yellow-breasted Chats were also very abundant.

However, my mission this year was to observe Five-striped Sparrows and a Green Kingfisher.  I could not relocate the Rose-throated Becard.  Their nest was still present, but no one was home!

I am now home after a long weekend of satisfying work and bug bites! 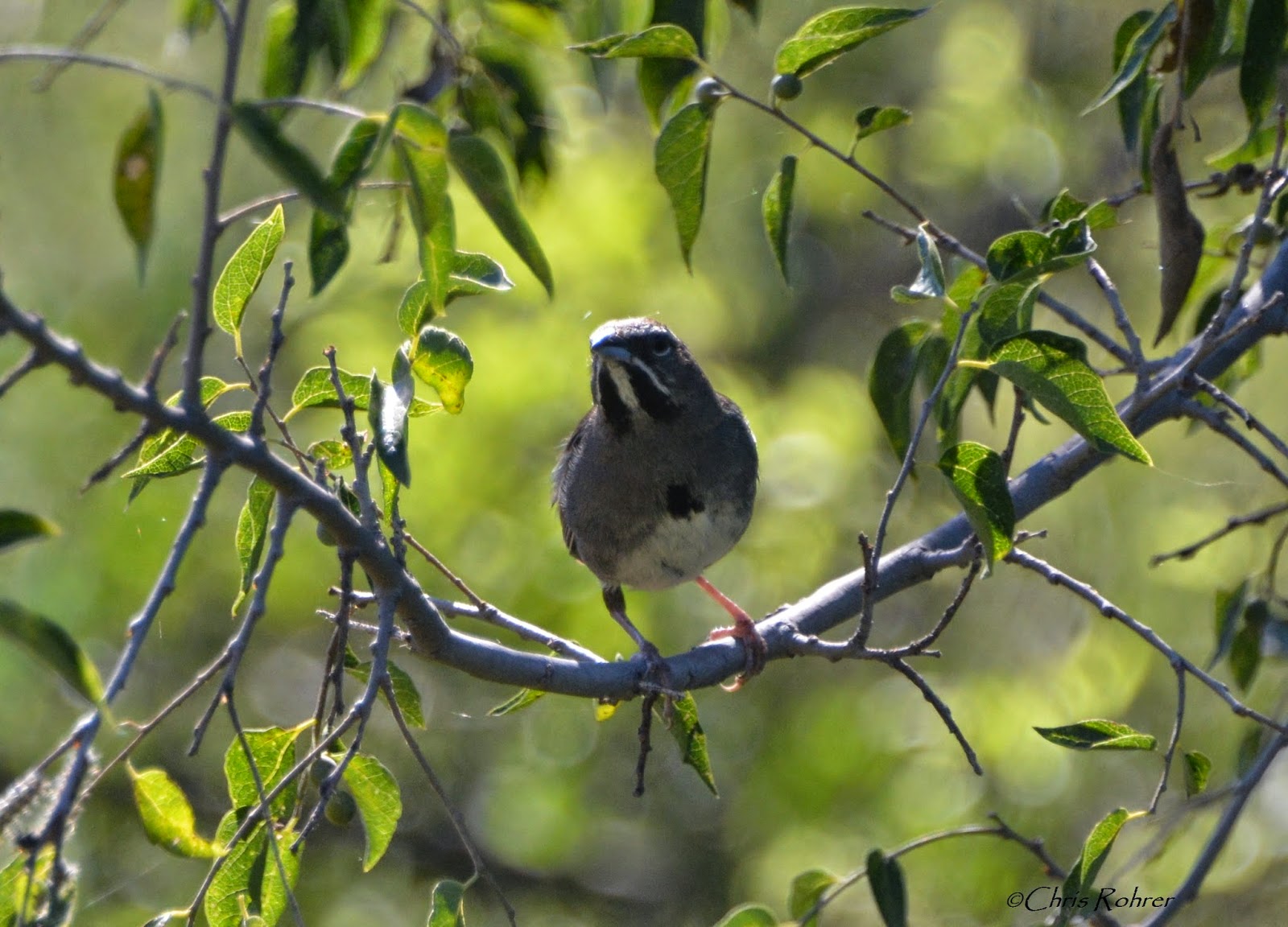 A special thank you goes out to Kathy Cooper and her daughter Mary Ann for making such wonderful meals.  It truly takes talent to work off the grid feeding a group of people without having the use of electricity.  Each meal was an amazing piece of art and our group was grateful for their hard work.  Kathy and Mary Ann, you both are one of a kind.  Thank you for organizing this spectacular event.

While it was a challenging weekend, we each completed our goals to help keep tabs on the wildlife in that area so that they stay protected.  We discovered Mountain Lions, Javelina, Coues Deer and so much more.  As for the Jaguars?  I hope they keep their secrets hidden from humans.  I know they are out there.  Once, 6 years ago, I came across one in the Amazon.  We briefly made eye contact and I smiled.  Some secrets are sacred.   For more on wild birds and other fun things found around our world, check out Wild Bird Wednesday!

Posted by Rohrerbot at 8:41 PM