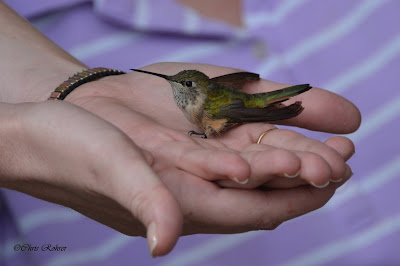 Ever wonder what goes into hummingbird research?  Well, it's quite the lengthy process and one that I had wanted to see for myself for a couple years now.  So with some friends, we headed out to one of the survey stations on the Ft. Lowell military base on Sunday morning to check out the studies going on during hummingbird migration. 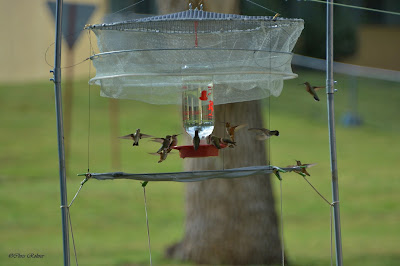 During the months of August and September, Southern Arizona becomes a hot spot for migrating hummingbirds.  Places like Audubon, Cornell University, etc. want to know more about which types of hummers are coming through a particular area.  Several feeder stations are set up with a loose net on top.  When everyone is ready to take readings, the net is dropped and the hummingbird count begins. 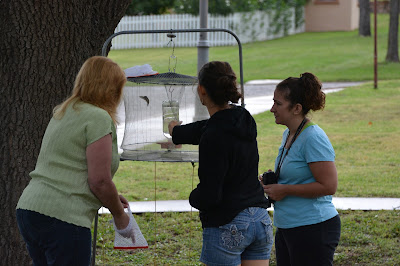 Very carefully, several volunteers gently retrieve the birds from the feeder nets and bring them over to a carousel where several more people are waiting to record data. 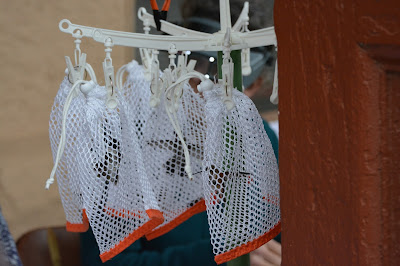 They are placed into open netted bags and then put on the carousel.  Once that carousel is full, the volunteers stop collecting the hummingbirds from the feeders and open the net up again allowing the charm of hummingbirds to feed again.  Another volunteer constantly monitors the sugar water and changes the feeders out at a regular basis. 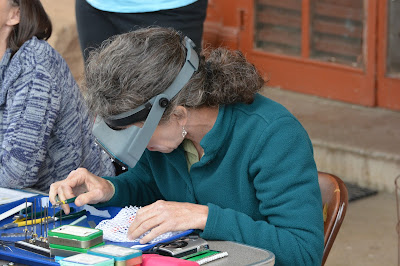 But back to the birds on the carousel.  They are taken one at a time where they are weighed, measured, ID'd, etc.  It's a very delicate process.  Another person records the data as the lead scientist relays the data while she measures.  As you can imagine, they cannot be bothered by outsiders while this pertinent information is collected.  Hummingbirds were also monitored for disease.  At one point, it was determined that one was sick.  The loose bag that carried the bird had to be destroyed to keep the disease from spreading to other hummers.  The bird was released back into the wild. 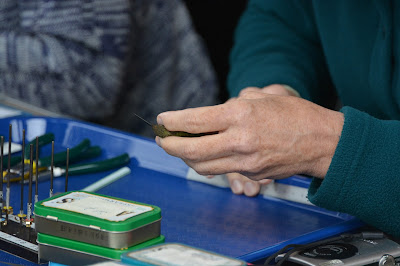 I found it really interesting to observe the entire process.  There wasn't a shortage of hummingbirds on this rainy day.  From my counts alone with Ebird, I documented mainly Rufous and Anna's Hummingbirds.  Black-chinned, Broad-tail, Broad-bill, 2 Magnificent's and a Violet-crowned Hummingbird were also present at the feeders on this day.  80 were documented around the feeders during the first part of the AM hours. 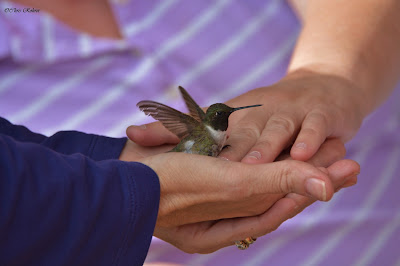 Once the readings have been taken, the hummingbirds are released back into the wild.  Visitors, at this point, are able to offer their open hands for launch.  Sometimes they will zip right out of your hands.  Other times, they will just gently sit for a few moments before taking off. 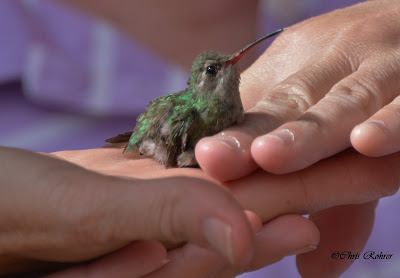 Youth are encouraged to participate. Children(and adults) need to keep their voices down while approaching the stations as the citizen scientists are taking the readings.  This is a great way to get kids to interact with nature and learn a thing or two about hummingbirds.  Perhaps a future birder will be born? 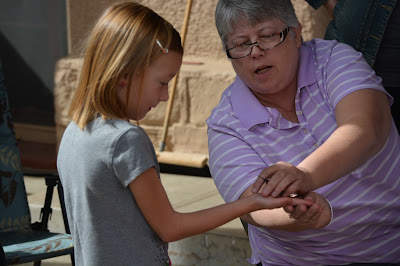 These hummers have a long trip ahead of them.  They're still at the midway point of their journey as they head back to Central America for the winter.  Feeders provide them the much needed food for their journey.  And studies like these help scientists around the world understand such things like population numbers and migration patterns.  Wishing all these little beauties and safe trip home.  More to come..... 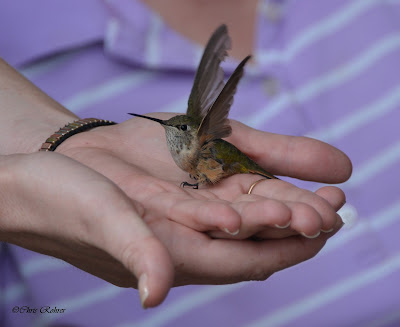 Posted by Rohrerbot at 6:47 PM