Tic toc, tic toc.  Time is running short.  Just how many different bird species could I find in the state of Arizona before the end of January?  I'd read reports and have to carefully decide. Did I want the bird for my Pima list or Arizona list?  Ultimately it doesn't matter, but during the month of January, one has to pick and choose.
Reports would come in and there were some nights I could not sleep at all.  This Pacific Loon reported in Tucson kept me up all night.  Sadly, this Mega-rare bird lived for one week before passing.  A birder found the loon floating near the reeds.  It was sent in and studied for the cause of death.  When I observed the bird, I didn't notice anything wrong with it.  Many birders around Southern Arizona were saddened by the news.  In November, Kathie and I spotted the Common Loon together.  It had difficulties getting out of a pond but eventually the loon made its way out.  This Pacific Loon did not.  I now have our local Wildlife Rescue number programmed into my cell phone in case I ever witness something like this in the field.  The bird will be preserved and studied by the University.  The autopsy had shown that the bird had died from starvation.  Mother Nature can be cruel sometimes.  But your memory dear Loon will be preserved on this blog.
Moving onto a happier report, I went onto the fabled Willow Lake of Prescott in Northern Arizona.  Home of the rare and special Tundra Swans.  It was a first for me as we scoured the lake for the Swans.  I had never seen wild swans before!
And along the way, I met my fabulous blogger friend Cynthia to find the swans!  We hiked through the cold and muddy fields full of goose $^&%$ and found our target bird.  It's more than just the birds.  Sometimes it's about the people and the experiences we have along the way. 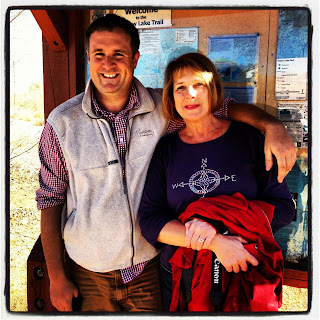 So many wonderful birds can be seen around Willow Lake like Canadian Geese, Snow Geese, Ross's Geese, Mergansers, a couple Bald Eagles......and Swans!
The Common Merganser took flight and I am now satisfied with a nice shot of this bird:)
And then.....PAYDAY!  It took us one day to find the birds and a morning with Cynthia to get up close for those better observations and pictures. Thank you so much Cindy!
The hike was fun and the rock formations were extremely cool. If you're up in Northern Arizona, check out Watson and Willow Lakes.  The Big January report is coming up soon.

Posted by Rohrerbot at 9:50 AM