On my trip to Wisconsin, I had hoped to find the Northern Saw-whet Owls that were migrating through our area.  Several weeks in advance, I called a local birder by the name of Bernie.  He's a really nice guy with lots of great stories.  Two years ago I reported on Woodland Dunes from my hometown and it's a fantastic place to bird! And the walks are incredible as well!!! But I wanted to see something I had never seen before....the banding process behind Owls.  I knew it was done with little birds and hummingbirds, etc, but with owls!!!???  So I set something up with Bernie so that I could watch.  They were getting ready for their big Owlfest that weekend.   But we were heading home before that time.  So I'd like to say to Bernie, "THANK YOU!" for that opportunity.  It was fun hanging out with other owl aficionados and the evening was incredible. 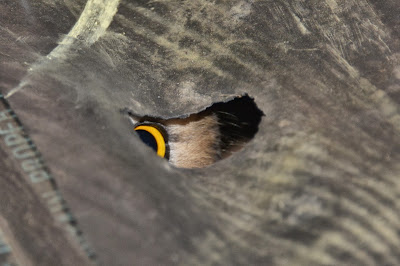 So how is it done?  Well I arrived at the specified time and place given to me and reported to the crew.  The areas studied are off limits to outsiders which included myself.  Three NSWO's were ready to be banded when I got there and I watched as the crew began to ID the birds. 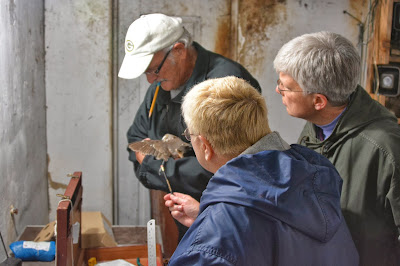 I'm a huge owl fan and have to say that this was really interesting.  The crew measured the wingspan to determine age, etc.  There was a chart that determined the sex etc of the owl based on the measurement, etc 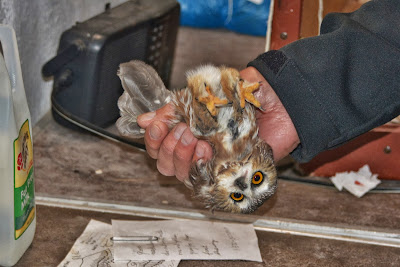 This little guy went upside down into a cup and was placed on a scale to measure.  When that was finished, the banding began. 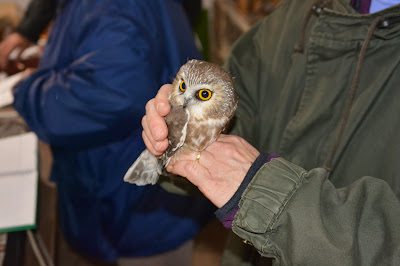 After that process happened, the owl is ready for release.  This little one is held this way so that the wings are kept in place.  The feet go between the fingers with the hand closing around the feet to keep the owl in place. 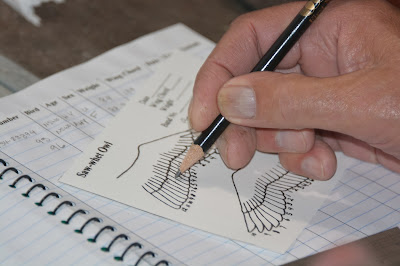 Our next owl went through the same process.  I watched as they marked the wing feathers on this bird. 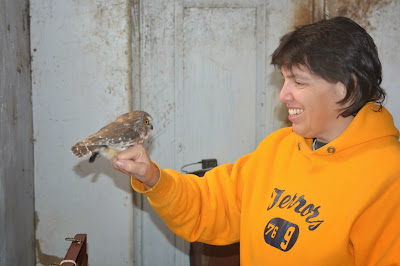 And then this Northern Saw-whet Owl goes through the same process. 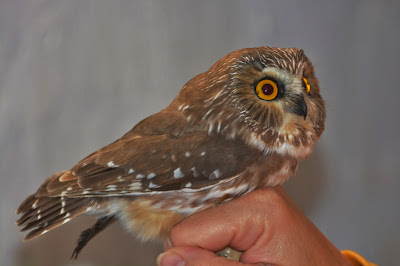 This is a great example on how the owls are held when they are ready for release.  Being a wildlife lover, I sometimes have a difficult time with the idea of banding, but I understand the importance of studies and migration, etc. For me, handling owls is a sacred thing.  The owls are held captive for that time period and there is a lot of trust that goes into this banding process. Bernie's crew did an amazing job going through the steps together. During this entire banding process a lot of education went on between the members and it was wonderful.  Then it was my turn to help release. 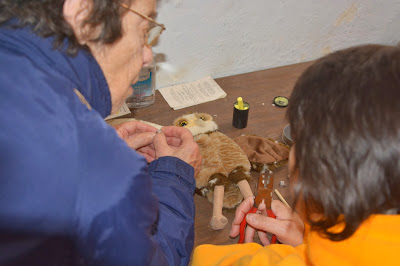 Here is a team learning how to band owls.  They are in training and obviously a lot practice and observation goes into something like this before a person can begin to band.  And then I was able to release the last owl. I can't describe to you all the excitement I had taking the little one back out to freedom.  As I set him on the ground,  we looked at each other for a moment and then......flutter flutter!  The owl disappeared.  It was the most thrilling evening ever.  A northwestern wind blew in that night and carried many more owls into the Two Rivers area.  I heard many of them in the night skies.  Evening birding is truly exciting.  And a little banding to boot! 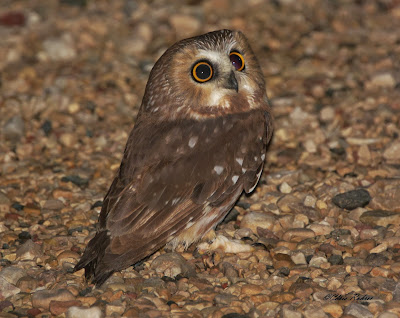 A special thank you goes out to the dedicated members of Woodland Dunes who shared with me that special night.   If I lived back home, I would be there to volunteer all the time.  The Dunes are some of the last intact tracts of land around my hometown.  They are home to many many species.  Bernie, I love you!  I can't tell you how much I appreciated the opportunity.  If you come down to Southern Arizona again, I would be honored to take you guys out birding.  I'm linking up to Wild Bird Wednesdays!
Posted by Rohrerbot at 10:57 AM